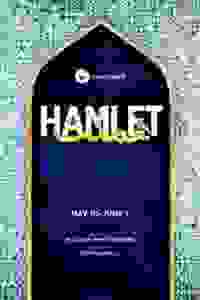 Waterwell presents a new adaptation of Shakespeare’s tragedy, set in Iran a century ago and starring Tony nominee Arian Moayed ('Bengal Tiger at the Baghdad Zoo,' 'The Humans').

Set in Persia on the eve of World War I, this 'Hamlet' weaves passages of Farsi translation into Shakespeare's English. In the play, a traditional way of life is being threatened by an evolving world, the land is being threatened by encroaching foreign interests, and a young man finds himself uprooted and torn between opposing customs, values, and codes. Co-starring three-time Tony nominee Sherie Rene Scott as Gertrude.

See it if you want to see a unique take on a classic. The scenes in Farsi are very well executed. Arian makes a great Hamlet!

Don't see it if you don't want to see Hamlet interpreted in a new way.

See it if You want to see a fresh, well acted, very interestingly concepted version of a Shakespeare classic. With a great lead performance.

Don't see it if Shakespeare is not your thing, or if you don't want to see something in a foreign language. About a third of this production is. Read more

See it if You've read and seen Hamlet. This is a bilingual and reimagined performance. Several strong actors. Terrific live music.

Don't see it if You've never seen Hamlet. You just won't get it.

See it if You want to see a fresh take on Hamlet. Setting is an Arab country w/Farsi sprinkled throughout. Great, thoughtful context for a classic.

Don't see it if You aren't open to new interpretations of classics. There is so much here to think about!

See it if You like to see Shakespeare with a fresh, new concept and staging

See it if You love new and inventive ways to rediscover Shakespeare.

Don't see it if You believe that rearranging the original text (moving the placement of "to be or not to be...") is blasphemy.

See it if you like Shakespeare and appreciate it put in a different context. The concept really works. Really well acted.

Don't see it if The farsi scenes are not overused but are better suited to a prior knowledge of the story. A synopsis prior helps. Small but intimate set. Read more

"The Waterwell 'Hamlet' may be indifferently acted, for the most part, but it’s conceptually bracing, as befits a company devoted to reimagining and recontextualizing classics...The founders are exploring the existential crises that arise when national identity comes under siege, and it’s remarkable how neatly Shakespeare’s text accommodates such an interpretation...Those are the kind of reflections inspired by this 'Hamlet,' which is more intellectually than emotionally stimulating."
Read more

"The production is physically graceful...The textures throughout are lush...The performances are mostly strong. But Hamlet is the drama’s prime mover, and Moayed’s elegant diffidence alters the play’s gravity...Moayed’s Dane blossoms as he plots; this Hamlet dances and shrugs and laughs his way to vengeance. We watch as Shakespeare’s most transparent character becomes opaque instead. If the play goes a little glassy, that’s a reflection of this new prince—sweet, but strange as well."
Read more

"As a new look at one of the greatest plays ever written, Ridgely's production is worth seeing. However, despite many intriguing moments and ideas, it never shakes the feeling of being incomplete...Ridgely and the company use the dual dialects to sub in for characterization, almost as though they spent the bulk of their rehearsal time on simply getting the words down...A 'Hamlet' with big ideas up its sleeve is still a Hamlet worth watching."
Read more

“Dazzling…It’s a perfect marriage of two radically different cultures and socio-political contexts. The intermittent use of Farsi and English never feels abrupt, but rather enhances the dramatic tension…I believe that even 'Hamlet' virgins would be able to follow the plot with ease, for the integrity of the play is not sacrificed over style…The production assembles a powerful cast…There’s also a sense of intimacy that makes it one of the most relatable versions of 'Hamlet.'”
Read more

"This version of the play makes some unusual moves…Apart from those rather significant dramaturgical choices, it is a very recognizable production…Ridgely has created a ‘Hamlet’ that both reaches out to a community and offers a new perspective on Shakespeare that likely has not been seen before (stateside, anyhow), and may not again for some time. It proves once again the diversity and accessibility of the material and provides yet another way to examine this remarkable play."
Read more

“Sure to re-whet your appetite for the Bard…This is no garden-variety Hamlet…The story of the play is always intelligible…The reshuffling of scenes and speeches keeps the play from tasting stale. The architecture aside, it's wonderful how easily a production falls into place when you have the right actors in the right roles...The entire acting ensemble is in fine fettle, and obviously delights in Shakespeare's language whether it's spoken in English or Farsi.”
Read more

"Probably not for the first-timer to Shakespeare’s masterpiece...Although some cuts have been judicious, other aspects distract from the story...The discord between text and visuals begins almost immediately...One suspects that attention to the 'concept' has left some actors to their own devices. In any case, there’s a good deal of speechifying and not enough music in the language...The production may aim for revelations about 'Hamlet' by resetting it in Iran, but the payoff is spotty."
Read more

“"An ambitious, bilingual production...Conceptually, the idea is brilliant and insightful. In execution, it is often muddy…Ajay Naidu is a particular standout for his wise, but chatty interpretation of Polonius...What truly makes the production sing—literally—are the musical interludes by Mohsen Namjoo and Yahya Alkhansa…Together, they create music that is simultaneously dramatic and hypnotic. Waterwell’s multicultural casting is another praiseworthy choice.”
Read more

"I thought the use of the Farsi language, in certain circumstances, was excellent. The show is brilliantly staged...The acting ranges from the very good to the not so very good, but I will consider that something that can be worked through during previews...Everyone mainly told the story quite well and I enjoyed myself."
Read more