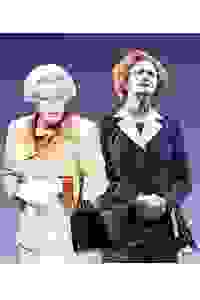 Round House Theatre's comedy for 59E59 imagines what the world’s most powerful women talk about behind closed palace doors.

The Iron Lady. The Queen. Born six months apart, each woman had a destiny that would change the world. But when the stiff upper lip softened and the gloves came off, which one had the upper hand?

See it if Great acting and writing. Funny and irreverent. Very enjoyable​.

Don't see it if Some references can be very unfamiliar to younger and obscure to most American audiences.

See it if You are interested in The Royals or British politics. The show is informative but also very entertaining with great performances.

Don't see it if The subject matter doesn't interest you than you will probably not enjoy.

See it if you're an Anglophile/history buff. MT's right-wing bent is countered by E2's humanity. Mostly well-acted; Hylton stands out. Often funny.

Don't see it if you're a conservative. Play freqly refers to being a play; interrupts flow. Still, charts rise of racism/anti-union/law & order/wealth gap..

See it if You are interested in British history told in a clever and funny way. This was very entertaining and well performed. A smart play.

Don't see it if You don’t like plays about history.

See it if you enjoy watching the meeting of great powers. Very cleverly done with a double cast for the women and two men who play the other rolls.

Don't see it if plays that break the 4th wall to reflect on actors and theater are not for you.

See it if Go back in time with Margaret Thatcher (Prime Minster) and The Queen.

See it if you enjoy a clever and well written story about meetings between 2 very famous women. There are 2 sets of T's and Q's. Simple set.

Don't see it if you want an unbiased view of Thatcher's politics. The playwright tries to show T's good side but clearly not a fan of T. Read more

“Buffini makes no attempt to mask the artificiality of the theater, and in doing so, she is free to unleash its full potential...Buffini's script teems with humor and wit, making us laugh as we learn. She's like Brecht, but fun...Rubasingham supports the script with an agile production that easily facilitates all of the required leaps of space and time...‘Handbagged’ is sympathetic to its subjects, but Buffini is clear-eyed about the larger implications of their tragic flaws."
Read more

“The show has just the right balance of humor, drama, and intellectual discourse...By interfacing the young and older portrayals of Queen Elizabeth and Margaret Thatcher, the show provides a compelling depiction of the two powerful women...’Handbagged’ is a well crafted play that features fine performances and an intriguing perspective of British government and culture...The production is timely with its perspective of differing ideologies.”
Read more

"Whether the playwright is correct in her assessment of the Queen can never really be known, but she has done her homework and her arguments are both plausible and wittily expressed. Indhu Rubasingham's sleek, uncluttered production, from Maryland's Round House Theatre, benefits from actresses with advanced skills in the art of verbal knifing...If there is such thing as a catfight of ideas, 'Handbagged' is it, with both antagonists determined not to surrender an inch."
Read more

"The description barely begins to scratch the surface of the mix of satire, politics, and meta-theater of Buffini's splendidly performed and well-directed play...Americans are likely to be less knowledgeable of some of the specific political issues that come up...Sometimes things threaten to spin out of control as we dance between reality and the fanciful, but director Rubasingham and the polished performances of the cast members make for a delightful brew of comedic drama."
Read more

“In ‘Handbagged’, we get not one but four handbag-wielding forces: two named Margaret Thatcher and two named Queen Elizabeth...Buffini sets them onstage all at once, bolstering and buffeting and contradicting not only their opponent but their own alter ego in a dizzyingly funny manner...The success of this play depends, in great part, on the cast being able to deliver the intricately woven material...Much fun comes from the men in their jumble of roles.”
Read more

"A nice lesson in later 20th century British history...The quirky thing about ‘Handbagged’ is how its dramatic structure suggests a doubles tennis match in that two actors depict the Queen...As directed at a steady pace by Indhu Rubasingham, this Round House Theatre production is staged in a formal manner that matches the generally cool tone of Buffini’s text...The acting is commendable."
Read more

“Buffini’s witty, elegant script...Buffini is free to mix glib metatheatrical jokes with more serious bits to create a giddy tapestry of fact and supposition...The four leading actresses are each quite wonderful....And while 'Handbagged is expertly staged by Indhu Rubasingham and often entertaining, it does start to wear after intermission...I’m not entirely sure that Buffini found the structural justification for a two-act structure."
Read more

"Although director Indhu Rubasingham's production is engrossing and entertaining, this talky and dense play may be difficult to follow for Americans who either do not know or have forgotten the details of Thatcher's 11 year career as the first woman British prime minister...However, with two actresses playing each of the women in both younger and older incarnation, it is quite remarkable how much they reflect the real life people they play."
Read more