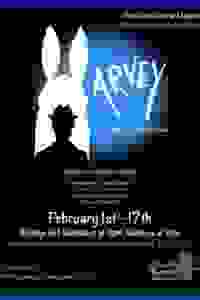 This classic, Pulitzer Prize-winning comedy tells the story of a perfect gentleman, Elwood P. Dowd, and his best friend, Harvey — a pooka, who is a six-foot tall, invisible rabbit.

When Elwood begins introducing Harvey around town, his embarrassed sister, Veta Louise, and her daughter, Myrtle Mae, determine to commit Elwood to a sanitarium. A mistake is made, however, and Veta is committed rather than Elwood! Eventually, the mistake is realized, and a frantic search begins for Elwood and the invisible pooka, which ends with Elwood appearing, voluntarily, at the sanitarium.

70
Some parts still clever and are a reflection of its time but ...

See it if Nice try by community theater. Great site to find future talent. Nice to see them on Show Score

Don't see it if Where is Jimmy Stewart?Parking can be a problem.

Don't see it if If you only like musicals