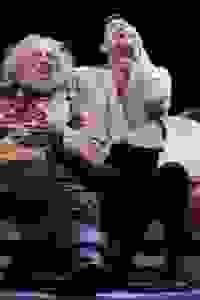 Henry IV - Parts I and II NYC Reviews and Tickets

BAM, the Royal Shakespeare Company, and The Ohio State University present the sequel to the first of Shakespeare's four plays about the House of Lancaster.

War is imminent. Guilt weighs heavily on the newly crowned King Henry after offing his rival King Richard, while Prince Hal is carousing with ne’er-do-wells at the tavern. So begins 'Henry IV.' It chronicles Prince Hal’s transition from wayward son to right-hand man on the eve of an epoch-defining battle.

See it if you have hours to visit with the Bard. Lots of impressive acting. Dazzling writing. Some clever staging. What you'd expect from the RSC.

Don't see it if you like Sh well cut. Every word is performed; some sections are dull. Part 1 is vastly superior to Part 2. Both are over three hours long.

See it if You want to see the masters of Shakespearean acting perform at their best! The best Falstaff that I have ever seen!

Don't see it if You do not understand Shakespeare or are too lazy to listen to every word spoken in a play.

"While there are, among these mighty 12 hours of theater, inevitably some sluggish patches, the overall achievement here—which includes one of the greatest performances I’ve ever seen, Antony Sher’s Falstaff—is nothing short of magnificent...If you can only see one play, I’d endorse 'Henry IV, Part I'...Mr. Sher draws out Falstaff’s piteous poignancy, even as he makes fine sport of his more repellent qualities...Sher practically bursts his big belt from the sheer force of life he radiates."
Read more

"Although solidly designed, the epic presentation is anchored by world-class performances. Chief among these is Antony Sher’s magnificent Falstaff. Emphasizing the fat rogue as a seedy, posh-talking parasite, Sher waddles through the comedy and pathos like a woodcut imp, dissecting platitudes about honor and reverent old age."
Read more

"The installments pull too hard in different directions. Especially in the 'Henry IV' pair, which are probably the most popular of the bunch, the chaos of tone and genre uses up so much of the director’s energy that not much of the material makes an emotional impression. This even though Antony Sher shines as a commanding, endlessly listenable, and visually perfect Falstaff. Still, the more pointed the comedy, the less everything else makes sense."
Read more

"It’s a deeply rewarding — if also an inevitably taxing — experience...The large ensemble displays the high level of polish and ease with the verse for which the RSC is noted. The true standout is Antony Sher, delivering a landmark performance as Sir John Falstaff...These 'Henry' productions are always thoroughly competent if rarely galvanizing. But what they lack in imagination they make up for with intelligence and coherence...Those are qualities not to be taken lightly."
Read more

"There’s also a great fuss, and rightly so, over eminent British actor Antony Sher transforming into the ultimate clown, Falstaff, in the RSC’s 'Henry IV, Part 1' and 'Henry IV, Part 2.' Not surprisingly, Sher’s Falstaff is perhaps the most tragic you’ve ever seen – a drunk whose jokes and barbs mask an incurable emptiness. He provides ample comic relief, as expected, but his Falstaff is no mere (fat) joke."
Read more

"Meant for those who like to see Shakespeare plays performed by a seasoned cast, in a traditional style, with lavish production values and without any cuts to the text...Gregory Doran (artistic director of the RSC) stages the entire cycle with liveliness, medieval flair and textual clarity, bringing out multilayered performances from his large cast...Standouts include Antony Sher’s thoroughly detailed and sympathetic Falstaff, and Jasper Britton’s burly and uneasy Henry IV."
Read more

"Sher does not disappoint...Every line is perfectly timed. His audacious lies and tall tales are delivered with such relish that he regularly has the audience rolling in the aisles with just a passing glance. Yet there's sadness to Sher's Falstaff as well...'Henry IV, Part 2' is the most neglected play of the tetralogy...Much of the play's action feels like an excuse to give the audience more of their favorite character, the hilarious Falstaff."
Read more

“Performed in rotating repertory with a cast of 31 accomplished British actors who continue in their roles in each play in which their characters appear, the four productions all by Gregory Doran, artistic director of the RSC, are lucid, absorbing and accessible. Whether you get to see the plays in chronological order or just one of these stand-alone plays, you will have an unforgettable experience in drama, history and Shakespeare.”
Read more

"The acting ensemble is faultless. Jasper Britton inhabits Henry IV with all the angst of a ruler who has become king by coldly un-kinging his cousin Richard. Alex Hassell buoyantly straddles his complex character Hal, first embodying the Prince's recklessness in the tavern world and his later transformation to the chivalrous soldier at Shrewsbury. Anthony Sher seems born to play the witty Falstaff...No weak links in this cast--and no dull spots in this political drama."
Read more

"I was able to see 'Henry IV, Part I,' with the masterly Antony Sher unrecognizable as a fuzzy, red-faced, debauched yet self-assured mountain of a Falstaff...The productions I saw are exhilarating—played without gimmick and with an exquisitely trained company. For all the beauty of the language, the actors never let studied artifice take the place of lucidity, psychological nuance and roaring action...Alex Hassell persuasively conveys lusty, boyish rebellion and future maturity as Prince Hal."
Read more

"Sher’s great fun to watch, but his roistering as Falstaff doesn’t feel natural...In a similar way Hassell is not totally persuasive as Hal. Frivolity and callowness don’t sit naturally on him...Though the first part is stronger, together the pair are an indispensable challenge that any lover of Shakespeare’s work will want to experience. They aren’t often done together, and this is an opportunity to hear verse-speaking of a high order and experience outstanding, if not flawless, productions."
Read more

"The productions are profoundly true to the text and the spirit of the plays. They are entertaining in the broadest popular sense. The are ingeniously staged and commendable in concept. The 'Henry' plays have the great performances and rousing theatricality that Shakespeare's historical plays demand...Anthony Sher does a star turn in the role of Sir John Falstaff."
Read more

"If there is a perfect fusion of production and performance, it comes, appropriately, in the scene in Warwickshire where we see Falstaff's ragged recruits shuffling across the stage en route to certain death...And, even if Part I is inescapably more seductive than Part II, the second play comes into its own in the Chekhovian Gloucestershire scenes."
Read more

"The production cumulatively builds a potent sense of the old order changing, and time hurtling by in a history-making whirl...A few cavils: Sir John’s low-life entourage need more hustle and bustle. The high-walled set suits the court and rebel scenes well, but drains life from the carry-on in the tavern...All in all, while they show the RSC at its more dependable and royally accomplished, it needs to be careful it doesn’t only do what we’ve come to expect."
Read more

"The productions have an admirably assured grasp of the plays' panoramic sweep, moving with fluency and a fine feel for thematic counterpoint between care-racked court and lax, frowsty Eastcheap, boozer and battlefield, urban and pastoral...It's so over-the-top that I'm afraid I found Hotspur's death – after the thrillingly tense climactic sword-fight – to be a relief rather than a wrench...blends fathomless gloom and mad merriment. Strongly recommended."
Read more

"There are dull stretches and a few flat notes, particularly as the tone grows more sombre. The downside of Trevor White’s near-crazed Hotspur, for instance, is that you scarcely mourn him. But this is a mature and beautifully detailed production, through which rebellion and turmoil roll as individuals and country grope towards a sort of stability."
Read more

"The play depends upon four key performances: Falstaff, Hal, Hotspur and Henry. It is not that they are all bad, but none of them are memorable, insightful, arresting or revelatory. For the stage of the Royal Shakespeare Company, the standard here is not really acceptable. Yes, it is not anything like as bad as the worst productions in the Michael Boyd era, but it certainly is the most pedestrian work that Doran has delivered in the last seven years."
Read more

"We’re increasingly used to jazzed-up productions of Shakespeare nowadays, dominated by an overarching directorial conceit. Yet there is still a buoyant market for the other sort of approach, of stately productions in traditional dress, and that is what director Gregory Doran offers in this pairing for the Royal Shakespeare Company. It’s a fine line between stately and stagnant, however, and the brutal truth is that these productions look tired."
Read more

"I feared that this more traditional full-length version of the play might seem bloated and heavy in comparison. Not at all, this production zips with energy and life. There's a perfect balance of humour and pathos and all the sufferings and terrible exploitation of the King's wars on his people in war is reflected beautifully and very movingly. Stunning, stunning, stunning. I cannot recommend this play enough."
Read more

"It’s an excellent rendition of Shakespeare’s most fun character. Sher is like a wily, loveable, sozzled old judge. He’s key to the success of Gregory Doran’s fast-paced productions...Part two is weaker...Still, the two plays together are illuminating – a full, engrossing, entertaining narrative, an epic journey of friendship, betrayal, coming-of-age and kingship. "
Read more

"Without this intriguing Hotspur, Part I might sink close to parody...We should be chilled when Falstaff is so careless of the lives of his recruits, for it should be such a contrast to his merriness. Yet here the contrast is underdone. And come his big moment at the end of Part Two, this Falstaff may not elicit many. But I quibble. Alarums. Trumpets without. All hail! With these two 'Henry' plays, Gregory Doran gives a strong statement of intent for his own reign at Stratford."
Read more

"While it is great to have the opportunity to revisit it, the thrill this time was seeing it as part of the King and Country cycle...There was a renewed energy in the performance, for part 1 at least. Antony Sher is still a joy to watch as Falstaff but the company is strong enough to ensure it isn't just his show. Part 2 didn't quite have quite the same energy...'Henry IV' parts 1 and 2 ably carried the baton and were a pleasure to watch all over again, I'm giving them an aggregate of 4 stars."
Read more

"At times the performance felt like a matinee, with a lack of gusto, honesty and depth to the piece. I was waiting for the plays to get gritty, but was left underwhelmed...Sher as Falstaff is great in the role and absolutely saves this production...Although filled with some great acting, RSC’s 'Henry IV' needs to be more raw and energetic. With some touching moments and witty comedy, the plays are unquestionably enjoyable and accessible to audiences, but are lacking in a bit of grit."
Read more