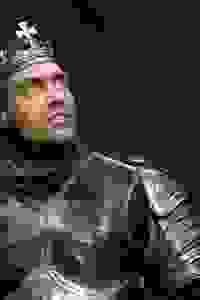 BAM, the Royal Shakespeare Company, and The Ohio State University present the final chapter of Shakespeare's four plays about the House of Lancaster.

Reckless youth morphs into kingly ambition as the once wayward Prince Hal takes full command of the crown. Prince Hal suffers wrenching self-scrutiny on the eve of battle, tongue-tied ineptitude in the face of love, and lingering guilt in the wake of fatherly sin. Director Gregory Doran goes once more unto the breach in the final play of Shakespeare’s epic cycle staged to mark the 600th anniversary of Henry V’s decisive victory in the Battle of Agincourt.

See it if you like Sh histories. Strong ensemble speak the verse clearly. Well-drawn characters. Pyrotechnics to wake up dosers. Rousing war scenes.

Don't see it if you prefer a trimmed version. Some scenes are tedious. There's a strange modern narrator device.

See it if Want to see the Royal Shakespeare Company execute a perfectly directed performance with skill, humor and unsurpassed acting.

Don't see it if You cannot follow Shakespearean language and wit. Or are too lazy to listen intently - or leave a cell phone on.

"Mr. Hassell’s Hal pivots convincingly from errant playboy to determined warrior, and ultimately, of course, to an inspiring Henry V...After many hours of discord and strife, the final scene of 'Henry V' lands with particular grace...Mr. Hassell and Jennifer Kirby’s tangle-tongued flirtation tugs joyfully at the heart...As the cycle comes to an end, we witness another king making the same descent not in resignation but with gallantry and pure youthful pleasure."
Read more

"Superbly mounted by the Royal Shakespeare Company under the firm, intelligent (and often funny) direction of Gregory Doran...Handsome and slyly charismatic, Hassell crafts the most complex, coherent Prince Hal I’ve ever seen, a privileged bully and sullen subject all at once."
Read more

"The most difficult of the four to stage, with its many battle and encampment scenes. With the same few actors running in diagonals in flashing light, the production seemed to have run out of tricks and troops. The laughs here are also less hearty...It would almost be a downer were it not for the post-victory scene...Suddenly we are in the world of the great romantic comedies, with their access, through humor, to profound human feeling. This unexpected gift sends you out on a high."
Read more

"The productions fully succeed in their goal of plunging us into their world of royal intrigues and epic battles...Alex Hassell has the challenging task of portraying the dissolute Prince Hal's elevation into the commanding figure capable of stirring his troops to battlefield glory. He's more effective in the former aspect, not quite displaying the needed charismatic presence later on...But it's an intelligent performance enlivened by welcome doses of humor."
Read more

"The best draw of the RSC’s 'King and Country' cycle is an actor named Alex Hassell, who stars as the wayward, ne’er-do-well prince in 'Henry IV' and an unexpectedly strong king in Henry V...'Henry V' is the one to see...In 'Henry V' alone, once you watch him motivating his troops in a tear-inducing 'band of brothers' speech and win the heart of Princess Katherine, you’ll be ready to follow 'this star of England' just about anywhere."
Read more

"Meant for those who like to see Shakespeare plays performed by a seasoned cast, in a traditional style, with lavish production values and without any cuts to the text...Gregory Doran (artistic director of the RSC) stages the entire cycle with liveliness, medieval flair and textual clarity, bringing out multilayered performances from his large cast, many of whom appear in multiple plays."
Read more

"As Hassell assumes the role of the most triumphant king in the Shakespeare canon, he never allows us to lose sight of the charming rapscallion we first met in Part 1. Rather, he uses those skills he honed in the tavern in his new position, especially during a delightful scene in which he woos Princess Katherine...The Henriad is an astounding and sweeping tale, brought to glorious life by the careful work of Doran. Catch it while it lasts."
Read more

“Performed in rotating repertory with a cast of 31 accomplished British actors who continue in their roles in each play in which their characters appear, the four productions all by Gregory Doran, artistic director of the RSC, are lucid, absorbing and accessible. Whether you get to see the plays in chronological order or just one of these stand-alone plays, you will have an unforgettable experience in drama, history and Shakespeare.”
Read more

"If you typically don't count 'Henry V' as one of your favorite Shakespeare plays, this production might change your perspective…And even if you have heard the famous Crispian speech a thousand times before, Hassell gives it a fresh spin here, and only a stone would turn a deaf ear to its stirring poetry…Hassell's acting is flawless in this play. And when it comes to pure acting stamina, nobody is his match in this Henriad."
Read more

"'Henry V' is often regarded as excessively jingoistic. Yet in the hands of director Gregory Doran, it proves far more nuanced than that, a lively and fascinating mixture of the heroism and opportunism that war produces...Tall and strapping, Hassell bears the weight of duties with confidence and speaks the renowned speeches thrillingly...Doran and his actors overall have unfolded a marvelous production with vividly drawn characters who still have something to say to us."
Read more

"Many of the play’s well-known scenes and speeches hit home with depth and exactitude under Gregory Doran’s scholarly and wide-angled direction...The RSC’s actors have absorbed Shakespeare’s awe-inspiring but sometimes confounding language as thoroughly as modern-day performers can do...However, in this production some scenes don’t have quite the needed flow or punch...Also, in parts of the second half, Hassell doesn’t muster the tight intensity of his first-half effort."
Read more

"Gregory Doran’s production, as part of a developing history cycle, takes a more classical approach, seeking out and exploring the play’s contradictions. A crucial key lies in the excellent chorus of Oliver Ford Davies...The action is played on a largely bare stage in which the words are allowed to weave their spell. This places a heavy burden on Alex Hassell, who exactly catches the conscience of the king...I’ve seen more partial productions but few that appeal so clearly to our imaginations."
Read more

"Its hallmark is an exposing scenic simplicity, its chief virtue a blazing lucidity...This account holds us captive with its understated power...Across the board it all coheres, which is hard to accomplish in a play so rife with warring moods, one that tilts between the epic and the comic...I kneel down and kiss the ground outside the RSC: this is just what the nation ordered."
Read more

"Doran’s interpretation, which deliberately takes a stance that’s neither pro-war nor anti-war, only sometimes pulses with vitality. Lewis’s sparse design isn’t atmospheric, and the lucid, studious and at times pedestrian approach is embodied by Oliver Ford Davies as the Chorus. His voice is reliably resonant and he misrepresents reality in ways that are interesting — but he looks like a rather crumpled history teacher."
Read more

"Revived now with huge flair and bite in a production by Gregory Doran that is an impressive addition to his English histories project...Oliver Ford Davies's fine, consciously schoolmasterly Chorus doesn't sound as if he's talking through his hat with those clear allusions to the Globe. 'Work, WORK your thoughts and therein see a siege' he barks at us, with a knowing nudge. With a company as vivid as this, we don't have to work very hard."
Read more

"Alex Hassell captured the complexities of Prince Hal growing up...Hassell continues the process with intelligence and honesty. It is a beautiful portrait...The play’s brace of major set-piece speeches are not rhetorical bravura but, in some ways, almost as introspective as Henry’s self-questioning...Doran’s production is straightforward and clear. There is no selectivity between the various facets of Shakespeare’s dramatic portrait...Such a conventional production is still not without its surprises."
Read more

"There is a kind of conjuring in Gregory Doran’s production of 'Henry V'...Doran’s production is robust and clear and avoids triumphalism while staying clear of any specifically anti-war interpretation. Alex Hassell is a restrained, cautious Henry, not easily given to rhetoric...This psychological uncertainty is appealing; less so the lack of certainty in his voice, which early on muffles the verse."
Read more

"Gregory Doran’s production falls between two joint-stools. It is one of the most sluggish productions of the play I have seen in years. The oddly disconnected design offers little in the way of atmosphere or location...As Henry, Alex Hassell is vocally weak...Gregory Doran’s flat-footed direction does little to illuminate the play’s themes...A handful of amusing moments do not add up to the right stuff...A pedestrian production stumbles its way to a Pyrrhic victory at Agincourt."
Read more

"I find Hassell's hunky Henry a mixed blessing. He's good in repose...But his lack of vocal richness and variety, and his stumpy, stiff movement and gesture gives him a puppet-like absurdity...Mind you, this play always surprises in its shifts of tone and emphasis...Everything that's good about the production is in spite of the RSC mustiness that hangs about... Some of the small part acting is abominable."
Read more

"Alex Hassell is excellent as Henry V. Yet Mr Hassell’s good looks are not the only thing to ravish the eye...Mr Hassell and director Gregory Doran give us something more varied...There is plenty of humour in this show. Terrific comedy...Much to admire here: the English, the French, the sparseness of the stage...This richly rewarding Henry V shows us the loneliness of kingship and the power of history to inspire us. It is unashamedly proud of its central figure, making Henry a patriotic hero."
Read more

"The humour comes once again from the common people and the stereotypical portrayal of Welsh, Irish and Scots soldiers. In the end it is Henry's wooing of the French princess that shows his maturity while retaining that youthful playfulness we've come to love and you can't help but smile. He did it; it was a funny, emotional and sometimes difficult journey but he became a worthy King. Well done Alex and well done the RSC, it's been epic. 'Henry V' gets five stars from me."
Read more