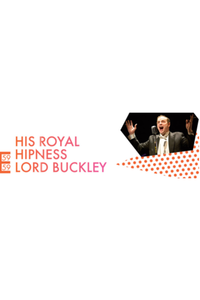 North Coast Repertory Theatre presents Jake Broder's show about Lord Buckley, one of the most influential comedians of the 20th century.

Following runs in London and Los Angeles, Jake Broder returns to NYC with his salute to counterculture icon Lord Buckley. The largely forgotten comedian of the 1940s and '50s reportedly inspired many entertainers including Robin Williams, Johnny Depp, Whoopi Goldberg, George Carlin, Richard Pryor, Lenny Bruce, and Bob Dylan. In 'His Royal Hipness Lord Buckley,' Broder and his jazz trio recreate a Buckley performance in a swirling mix of comedy, bebop, and cabaret.

See it if You are a particular fan of Lord Buckley. The musical interludes were good.

Don't see it if The performer is talented but I never felt a connection to him. He was in his own world. He ranted and raved and made me uncomfortable.

See it if you want to experience an engaging, high energy, topical, cabaret style performance; great jazz/beebop from a wonderful trio of musicians.

Don't see it if you don't like Lord Buckley; satirical, non-fiction, political theater touching on past and present; you dislike jazz and intimate settings. Read more

See it if you are interested in an iconic comic from the hipster era; enjoy classic jazz/be bop, talented musicians; you appreciate intelligent humor

Don't see it if the hipster era holds no interest for you; you don't like be bop music or hipster slang; you are not interested in Lord Buckley

See it if If you like humor, jazz, hipness, coolness with a great message!

Don't see it if If you want classic theater in a regular theater setting.

See it if you want a different show. Buckley's 'hipster' lingo predates wrappers of today. Some very cleaver and original stuff.

Don't see it if don't like jazz music. Timely political update might not sit well with the Trumpettes.

See it if you like jazz and/or are nostalgic about 1940's hipsterdom.

Don't see it if you are looking for a conventional show with story line, character development and an arc.

See it if You want to experience "hip" talking & writing. Jazz trio was talented as was Lord Buckley, but...

Don't see it if You don't like cabaret, and don't relate to an archaic way of talking "jazzy."

See it if you enjoy a cozy night club setting, want to listen to a master story teller & his hip news man, accompanied by fantastic musicians.

Don't see it if don't have the energy to pay attention as the stories are intertwined with history and politics; or prefer a regular audience setting. Read more

"For more than 10 years now, Jake Broder has been on a quixotic mission to preserve the memory of Lord Buckley...Mr. Broder, holding a cigarette that may or may not be wacky tobacky, throws himself into the routines. But the novelty of Buckley’s lingo grows thin quickly, culminating in a particularly dull bit...At this point Buckley, who died in 1960, is more interesting than his material. Mr. Broder might consider redirecting his passion into a biographical play."
Read more

"Liberal, contemporary political statements are cleverly embedded in the dialogue...Broder's portrayal of Lord Buckley showcases his creativity and wonderful comedic timing. Michael Lanahan is ideal as the the Hip News Man…The excellent musicianship of the jazz trio makes the pacing of the show lively and fascinating…See this zany, yet incredibly relevant show while it is on the New York City stage. It is an outstanding piece of theater for the holiday season."
Read more

"An exhilarating recreation of the 1950s cult performer’s act...Broder's performance is a series of enthralling, fast-paced, and animated recitations of Buckley’s routines as well as superb jazz singing...His script fuses the 1950s set pieces with anachronistic topical references, achieving the fantasy that Buckley exists in the present...Director David Ellenstein supremely blends all of the spoken, musical and technical elements into a briskly paced production with creative flourishes."
Read more

"It’s funny, in a gallows humor kind of way. Missing, however, is any sense of Lord Buckley himself...Audience members who know little-to-nothing about the Good Lord B will be forced to take a trip to Wikipedia…It’s a tragic story. And although Broder does a terrific job of imagining Lord Buckley’s reaction to the foibles and frustrations of 21st century life, I wish some elements of Buckley's personal history had been woven into the narrative he delivers."
Read more

"Doomed to mediocrity...Its shock value and originality are virtually invisible today...But director David Ellenstein and writer/performer Jake Broder give it their all...Broder’s script is, for no apparent reason, set 'Now' and includes contemporary political barbs, most aimed at Donald Trump. If you’re going to travel back in time to relive a cultural moment, it seems counterintuitive to make current references...Buckley’s act simply doesn’t stand the test of time."
Read more

"Broder is doing the world a great service by recreating Buckley’s unique political humor for contemporary times. The message of love, peace, joy, tolerance, respect, sharing, is particularly appropriate for Christmas time. But it is not corny at all. It is delivered with swing and hipsemantics, and comes at you sideways, hitting you upside the head…There is so much that is funny and poignant and profound in this show…I loved this show and may even go again."
Read more

"The most racially insensitive production I have seen at a major theatre...Though its actors may not be wearing blackface, 'Lord Buckley' is a minstrel show, a recklessly cartoonish misappropriation of black culture...A sleek mess of jumbled storytelling and retrograde politics...This isn’t a matter of speech-policing or political correctness: Quite simply, 'His Royal Hipness Lord Buckley' is an act of cultural appropriation dressed up in a condescending veneer of reverent nostalgia."
Read more

"Mr. Broder’s delicious, 90-minute, two-set foray to those depths is special indeed and a must-see event…Mr. Broder delivers an unbridled, full-bore fusillade against racism, sexism, xenophobia and all things president-electoral...Mr. Broder’s honesty and authentic performance offer true insights into the human condition and the state of the nation in the present. He is engaging, informed, and understands the role of comedy in effecting significant change."
Read more