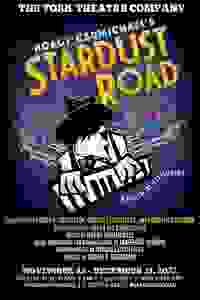 The story of seven friends' relationships is told throughout the decades, using the music of Hoagy Carmichael.

Stardust Road is a new musical about how six friends were brought together by a single man, told fully through the music of Hoagy Carmichael.

The seven friends spin a tale of friendship and changing relationships over four decades in America: the early days of ragtime, jazz and blues; the romantic New York of the 1930’s; the hectic and unknowable years of the World War II era; and the post-war Golden Age of Hollywood—all while walking down Hoagy Carmichael’s Stardust Road.

See it if More of a revue than a play. Great costumes, tap.

Don't see it if If you want dialogue.

See it if you'd enjoy a review of Carmichael's music with a fun, young cast and great choreography. Good orchestra makes for a toe tapping 90 minutes.

Don't see it if you do not like musical reviews. Sound for voices could be a bit better. Read more

See it if you understand that songs and music can be dialog. You want brilliant curating of a large songbook to tell a sad, melancholy story w/rebirth

Don't see it if you need a spoken book to "explain" things to you. Sometimes songs and dance can be as effective or more effective than dialog. Read more

See it if You like good dancing especially tap and superior costumes. An outstanding performance by Cory Lingner makes it all worthwhile.

Don't see it if You want dialogue (there is none), if you want history of Hoagy (there is none). History is on walls outside theater; read before entering. Read more

See it if you want to enjoy the prolific talents of Hoagy Carmichael presented by talented singers and dancers and a terrific band.

Don't see it if you need a plot. This is a revue that spans several decades with Hoagy's great songs.

See it if you like talented young people singing & dancing beautifully. The show captures the periods very well in dress, style, movement. I loved it.

Don't see it if you expect a plot or information about Carmichael. This is not a bio. The thin "plots" don't really make sense. But it is a retro delight.

See it if into a medley of Carmichael’s songs, in 4 sections, a gorgeous wardrobe, and of course for York, great singing and dancing.

Don't see it if well... much here is without context, so despite the great direction, there was a sense of quantity over meaning. Read more

See it if you like music from the era, with period costumes and settings to match

"You can enjoy the soundtrack of a generation that has now mostly left us in 'Hoagy Carmichael's Stardust Road,' a lovely tribute to a gifted songwriter."
Read more

Much of the time, the show provides the often-delightful shock of the unfamiliar: Conceived by Susan H. Schulman, Michael Lichtefeld, and Lawrence Yurman, with an assist from Carmichael's son, Hoagy Bix, it is a heaping selection of songs, not just the expected hits, that demonstrates the composer's staying power through several decades of pop music.
Read more

Conceived by director Susan H. Schulman, choreographer Michael Lichtefeld and musical arranger Lawrence Yurman, and developed with Hoagy Bix Carmichael (Hoagy’s son), "Hoagy Carmichael’s Stardust Road" succeeds not by showing the audience another “And Then I Wrote” compendium, but by allowing the endless riches of the Carmichael songwriting catalogue to say it with music. We are treated to five extended “parts” where we meet seven characters, all friends, as they traverse the decades from the 1920’s to the 1950’s, through every high point and every heartache.
Read more

"The cast of seven, sings and swings and taps their hearts out, everyone getting their solo to shine, and all backed by a multi-talented six-piece band that flows effortlessly from song to song."
Read more

"The York Theatre Company’s Hoagy Carmichael’s Stardust Road, does not take us on a biographical journey. Instead, it tells the story of seven friends in five scenes spanning four decades."
Read more