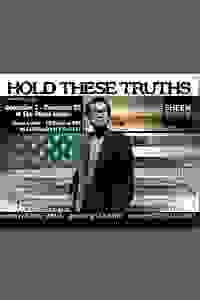 Hang A Tale Theater Company presents this solo play inspired by the life of a real Japanese American, who fought against US government's efforts to set up internment camps during World War II.

'Hold These Truths' explores a little-known chapter of American history, when civil liberties were under attack, constitutional rights violated, and issues of race hotly debated by a divided country. In Seattle, University of Washington student Gordon Hirabayashi fights the US government’s orders to forcibly remove and mass incarcerate all people of Japanese ancestry on the West Coast. As he struggles to reconcile his country’s betrayal with his passionate belief in the US Constitution, Gordon begins a 50-year journey toward a greater understanding of America’s triumphs, and a confrontation with its failures. Joel de la Fuente stars as Gordon Hirabayashi in this Drama Desk nominated solo performance.

See it if you'd enjoy a riveting lesson abt Japanese internment thru the eyes of the young man who fought the order all the way to the US Sup Court.

Don't see it if you dislike solo shows. But Joel adroitly embodies many characters. Hirabayashi, an American hero, fought for his Constitutional rights. Read more

See it if Powerful writing and acting. Scary how quickly the nation can be overcome by fear and racism, and discard the principles of its founding.

Don't see it if You don't want to immerse yourself in historical injustice. You already know what happened and don't want to see it brought to life.

See it if you want to be fully engaged in theater thru a mesmerizing performance & meaningful script. Joel is stunningly talented. Just great.

Don't see it if Not interested in history or a thoughtful look at values/ideals. This is a smart, moving, touching play that makes u think. Not heavyhanded. Read more

See it if You value brilliant acting and writing. You believe in the constitution. You want to see how racial hysteria fails us

Don't see it if You voted for Trump. You think a wall is a good idea. You thin the constitution is just a piece of paper

See it if You want to see Joel de la Fuente deliver a tour de force performance in this compelling story.

Don't see it if You aren't interested in history of in seeing a story that makes you question your faith in the Constitution. Read more

See it if You are interested in history and want to learn something about a hero who fought against injustice.

Don't see it if You want to believe that everything is fine in America and always has been.

See it if You enjoy being swept away by a stellar performance telling a specific, yet broadly relevant story. Too relevant today.

Don't see it if You don’t like one-man shows, or you don’t like your theater to have a political core. Read more

See it if you reside in the United States.

Don't see it if you are medically incapable of sitting still for 90 minutes.

“Elegantly directed by Rothe in a top-notch production...A gripping story about a shameful chapter of our history, when the US government looked at its own people and saw the enemy...De la Fuente’s endearing solo performance, which vividly — and, more often than you’d think, comically — renders Gordon and the constellation of people around him. Ms. Sakata’s deeply researched script could come off as preachy, but in De la Fuente’s hands, Gordon is a sweetly steely idealist.”
Read more

"A wonderful documentary of an American hero. The work is professionally performed and rendered, which allows for this great American story to be fully told...De la Fuente’s performance is remarkably efficient, buoyant, and specific with some of the best elocution I’ve encountered recently to buttress wonderful storytelling...De la Fuente told the story so clearly...There was never a wasted movement, no act didn’t contribute to the tale...It totally worked."
Read more

"Joel de la Fuente was astonishing in his ability to be all of these individuals. With the slightest shift in his tone of voice, facial expression, and posture he glided effortlessly among this diverse roster...Lisa Rothe oversaw the seamless transition among characters, places, and times, never allowing the story to rest...A sharply written play, an important history lesson and a reflection on the world today. This production certainly fully realized the breadth and depth of the story."
Read more

"It takes a deft dramatic hand to craft moving theatre out of social history and courtroom drama, and a nuanced actor to portray the passage of time and multiple characters. The Epic Theatre production of Jeanne Sakata‘s 'Hold These Truths' reveals just such deftness of hand and actor nuance...The experience of this piece of theatre is that life story and more — culled to its human and emotional essence, we hold Hirabayashi’s story as we must all 'hold these truths.'"
Read more

"Sakata’s play is deeply particular—an intimate telling of a heroic story lived by a captivating person...Joel de la Fuente, under the direction of the remarkable Lisa Rothe, fully engages your attention for a fast-moving 85 minutes...It provides a coda to the company's year-long consideration of the many forms of power madness—and the many forms of forgiveness possible, once even the shouting is over."
Read more

"Onstage, de la Fuente proves chameleon-like, effortlessly and believably going from one character to the next...In fact, once the curtain closes on this lyrically mesmerizing show, it’s hard to believe that only one actor has been onstage the entire time...Making everything possible is Sakata’s lovely, lilting script. She manages to weave a tapestry of experience that is at times funny, at times uplifting, and sometimes, just tremendously sad and shocking."
Read more

"To call de la Fuente’s performance a tour de force would be misleading—although it is surely that. Under the skilled direction of Lisa Rothe, de la Fuente embodies multiple characters as well as Hirabayashi across several decades of his life...The power in de la Fuente’s performance comes from his utter avoidance of any virtuosic, 'show-offy' moments...This play can offer some salve for the weary soul as it portrays the sometimes long, but hopefully inevitable, bend toward justice."
Read more

"Joel de la Fuente conjures a variety of characters with virtuosic ease under Lisa Rothe’s spare and focused direction...Sakata’s play is not a polemic but rather a multilayered portrait arising from anecdotes, memories, and telling details. The most striking aspect of 'Hold These Truths' is de la Fuente’s portrayal of Hirabayashi as a cheerful warrior...This well-crafted and beautifully acted piece offers not just a glimpse of the past but an extraordinarily relevant message for today."
Read more