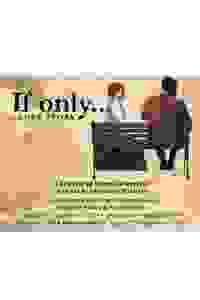 View in admin
If Only
NYC: West Village
76
Score it Scored!

If Only NYC Reviews and Tickets

The American Vicarious presents this 19th-century-set drama about the relationship between an ex-slave and a socialite.

In 1860 Abraham Lincoln befriended two people in New York City: a well-educated ex-slave, and a spirited young society woman. In the middle of the Civil War, the President brought them together. A romantic relationship ensued, but it couldn't be acknowledged publicly. Thirty-six years later they meet again, and long for what might have been had Lincoln lived.

See it if You want to see 2 fine actors try to bring life to a lifeless piece of writing , the ideas are better than the outcome

See it if you just have to see Melissa Gilbert onstage.

Don't see it if you expect the realization to live up to the premise.

"None of the actors comes off well in the director McElroen’s staging, which has the artificiality of a museum piece...It is like watching a sepia-tinged historical tableau come to animatronic life...Full of heavy-handed metaphor, the play fairly bursts with topicality...‘If Only’ asks what degree of intimacy, and how much agreement on our common past, is possible between Americans of different races. But its storytelling does nothing to bring urgency to the question."
Read more

"Klingenstein’s staid, circuitous and symbol-heavy script is all tell and no show, so the production often feels static. Yet there are flashes of emotional action. Smaltz is magnetic as Samuel, who has become a history professor and gifted raconteur; he outshines Gilbert, whose hard work always shows. But even with its flaws, including a lens of white privilege, 'If Only' tugs at the heartstrings, reminding us how far we’ve come—and how depressingly far we have to go."
Read more

"There are very few fireworks to speak of in Thomas Klingenstein's new work 'If Only.' With a cast led by Melissa Gilbert, the play fails to conjure up the exacting realism the piece requires...The static nature of the play, the stagnant performances, and Christopher McElroen's glacial staging get in the way of what could have been an enjoyable evening...'If Only' seems more like a wax museum diorama than a living, breathing piece of theater."
Read more

“An intriguing enough story to provide a bittersweet diversion…The bulk of the 85-minute play is a conversation that details their past love affair, but the audience can see instantly why it didn't work...While there is a great deal of passion and danger in their situation, none of it comes through in Klingenstein's mundane dialogue. The lack of excitement and tension in McElroen's direction forces the drama to play at a lethargic pace.”
Read more

"An exercise in wistful nostalgia...Despite a couple of fine performances and one or two interesting points about race in America, I'm afraid you'll have to settle for a rather too-polite serving of tea and sympathy...Despite its generally becalmed atmosphere, 'If Only' makes for modestly pleasant viewing, thanks to the work of its leads...Despite a couple of moderately intense moments late in the evening, 'If Only' pretty much ends where it started, in a state of emotional stalemate."
Read more

"Klingenstein beautifully and simply renders his fictional account with exquisite detail and emotion. Klingenstein’s dialogue is precise and filled with sharp epigrams. It’s all a genteel and moving exploration of the human condition...This is essentially a two-characters-in-a-room play, and director McElroen has staged it meticulously with creative visual variance so that it compellingly reaches its wistful conclusion...'If Only' is an engrossing work of theatrical Americana."
Read more

"It would appear that both the character of the young child and Mr. Astorcott might be totally eliminated since their appearances are short lived, adding little value to the story. They might just as well be referenced for the minor benefit they provide. The play, directed by Christopher McElroen, doesn’t get off the ground, as it circles round and round seeking some real substance. ‘If Only,’ unfortunately, has several missed opportunities."
Read more

"Melissa Gilbert is charming, though sometimes (appropriately) a little infuriating, showing her characteristic vivacity and spark. But Mark Kenneth Smaltz's Samuel Johnson anchors the piece with his emotional gravity and strong, understated acting. Klingenstein's script is poetic and clever, if a little forced in parts...The script frequently succeeds in being warm and emotionally resonant, as well as relevant."
Read more

"A sweet and caring little play that is perfectly suited to the intimate space...Gilbert is wonderful in her girlish and proper demeanor...Smaltz’s voice rings strong and true with a deepness and a spirit that draws us in, but the two characters just keep talking and talking. Although it is always charming and quite sweet, the play’s intent remains far down the road and tends to never appear to get any closer. The writing and direction have created a pretty road that is far too flat."
Read more

“Mainly, we listen to a bland discussion drama filled with historical pedagogy…Too often, the playwright resorts to having characters read from books or letters. Running beneath it all is a subtext obliquely referencing the still simmering love of Ann and Samuel. The notion that things might have worked out differently had Lincoln lived remains unfulfilled and barely credible…The play's pretensions, sleepy pacing, and lack of dramatic action keep their thespic canons from exploding.”
Read more

“Gilbert is very much like a grown-up Laura Ingalls Wilder with her childlike voice and presence. We believe the simplicity of her, but this character has nowhere to go because she never really breaks the mold. Smaltz has a presence, but is confused as to why he is there, as are we. We know, as he does, this is but a folly, for this is going nowhere. There isn’t any drama if the characters avoid their feelings.”
Read more

"The well-researched play is as enamored of Lincoln as its two protagonists, yet expresses the president’s beliefs without rose-colored glasses...Though it takes a bit longer than it might to achieve momentum, the piece vividly manifests personalities. The ensuing push/pull is engaging and sympathetic...Director McElroen brings to life two unique characters with skill and subtlety. Emotional revelations and the wrestling of pretense with devotion are particularly adroit."
Read more

“A relatively vanilla tale…There’s not much to McElroen’s direction…Klingenstein tries to make various comparisons to the current state of race relations in the United States, but they mostly fall flat in the face of the obvious…‘If Only’ turns out to be more of a writing exercise than a fully fledged play, an overly trite story that exploits Lincoln’s beliefs and accomplishments, wondering why we all still can’t just get along.”
Read more

"There is no plot here...All that this conversation piece achieves for its two characters is a look at what might have been had they lived in a different time...Gilbert’s performance, honest and direct as it is, is so much a miniature that at times I felt I was intruding on a private conversation...The staging by McElroen of this plot-shy play does not help to enliven the writing...Well-intentioned, but for me, an embryonic idea that never quite developed into a healthily developed play."
Read more

"Begins with the clumsy device of having Ann Astorcott read a story from her journal to her ward. This exposition-dump is a slow way to begin a play...;'If Only' comes across more as a history lesson than a love story...McElroen's direction does no favors to Klingenstein's play, which, while clunky, could have more life to it. It's hard to judge how good or bad the performers are, but if Gilbert and Smaltz had more—or any—chemistry, the production would be much improved."
Read more

“If only all plays could be so lyrical, eloquent and timely…Director Christopher McElroen transports us back in time while spotlighting issues about race that, in many ways, don't seem all that different in 2017. It's a skillful journey…Samuel has a way of retelling history (he's a teacher of it) that makes it real -- much like the gift this playwright has in bringing the past to the present in just 85 minutes.”
Read more

“Full of extraneous exposition blanketing a core of rich yet unrealized possibilities and stilted, fairly sedentary direction by Christopher McElroen…The production is subdued, underplayed, and without an underlying electricity that might be there in the writing but is not on stage in these performances. If only there were two fewer characters. If only the story were more focused…If only the characters were allowed to do more than stand and sit and play with photographs.”
Read more

“The play's subject and story are novel ones…What distinguishes the play is Klingenstein's considerable gift for characterization and his facility at capturing the elegant and formal patterns of turn-of-the-century speech. From these he constructs a story of surprising and very real poignancy. He is aided in that by director McElroen's fine staging. Gilbert is superb as Astorcott…She is well-matched by Smaltz's solid yet delicate performance…An intimate and affecting drama.”
Read more

“Entrancing…You will not be able to look away from this captivating four-person play. Melissa Gilbert delivers a heart-wrenching, starry-eyed performance…We see a wide range of emotions that make this play absolutely breathtaking. Throughout the play, the audience was thoroughly engaged, from the witty one-liners and clever dialogue to the heart-wrenching and heartwarming confessions."
Read more