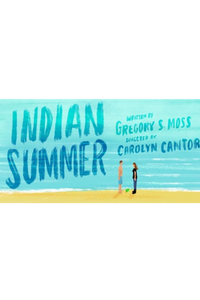 Playwrights Horizons presents this new romantic comedy about two 16-year-olds who forge an unlikely friendship amidst the class warfare in a small Rhode Island town.

Abandoned by his wayward mom, 16-year-old Daniel is consigned to spend summer with his widower granddad in a Rhode Island beach town, where the locals don’t look kindly on city kids. But his hapless vacation turns around when he meets Izzy: tough-acting, back-sassing, beguiling, and taken. The impulsive Sicilian-American girl is determined to defend her territory from this prep school invader. Gregory S. Moss’s feisty romantic comedy follows a passing fling that could last a lifetime—as impossible and charmed as an Indian summer.

See it if you enjoy a fun show with depth and meaning, as well as terrific performances.

Don't see it if you're turned off by New England accents.

See it if You appreciate wonderful acting and an engrossing story. A very enjoyable play, emotional but lots of laughs too!

Don't see it if You'd prefer a Broadway show with a big cast.

See it if you like very ordinary theatre. Not worth going out of your way to see.

Don't see it if you want something special in your theatre-going experience.

See it if You want to see pitch perfect acting by all 4 principals in a touching & funny play about young love and how it doesn't always run smoothly.

Don't see it if You can't get by certain inconsistencies in tone & logic. I could due to the superb cast.

See it if Very watchable. Clever, original characters. Funny and insightful. The cast is also easy on the eyes. A pleasant diversion.

Don't see it if Doesn't add up to that much. Tries to be heavy, but fails in that. Kinda fluffy, in the end.

See it if You want an entertaining evening with engaging characters

Don't see it if You prefer profound, original scripts.

See it if You enjoy coming of age stories

"Although the play’s four characters are given sensitive readings by the fine cast, Mr. Moss’s play remains so muted that it feels like an overcast day at the shore...It feels vaguely formulaic, as if assembled from a kit to create, well, the kind of delicate-hued, funny-sad plays that Annie Baker specializes in. All the talk of the ocean brings to mind the play’s flaws: it has a washed-out, watery quality, and the characters, while agreeable company, are not exactly bottomlessly interesting."
Read more

"A warm and gently breezy new play about teenage love on the Rhode Island seashore…The touchingly tentative coming-of-age dialogue of the first act is not quite matched by that of the second, but the engaging cast puts the play’s cosmic mildness across. Although Moss dips his toe into the dark and vast waters of the ocean, he doesn’t let it linger there for long. He’s more interested in what the tide brings in, however briefly, before washing it away along with who knows what else."
Read more

"Life’s a beach in Gregory Moss’s coming-of-age dramedy. Abandoned by his mom, 16-year-old Daniel (Campbell) clicks with 17-year-old Izzy (Kibler), a local girl with an attitude and a beefy older boyfriend Jeremy (Tippett)...After a promising start, the play crumbles sandcastle-style due to cartoonish characters, an over-explanation of its themes and plot detours."
Read more

"A complex (and somewhat sleepy) meditation on lost opportunities…Moss has some important insights about the nature of relationships, the injustice of circumstance, and the cruelty of time, but those observations would be a lot more impactful in a better-edited play. Presently, watching 'Indian Summer' feels a lot like hunting for a lost wedding ring in a watery cloud of sand and seaweed: We know something truly valuable is there, but it is hard to discern through all the muck."
Read more

"A genial, if rather standard, coming-of-age play…There's some lovely writing when Daniel and Izzy start indirectly expressing affection for each other, and a bit of weirdness when George asks the teenage girl to put on one of his deceased wife's dresses and have a conversation with his as if she were her, but director Carolyn Cantor's strong cast is charming and 'Indian Summer' is a sweet bit of romantic nostalgia."
Read more

"'Indian Summer' is an odd, but affecting, one - a romantic comedy and a meditation on loss, a tough-minded look at the fragility of relationships, and a sometimes illogically plotted tale that nevertheless makes clear how small choices can lead to unexpected results. The production benefits enormously from the sensitive performances of its cast...Moss doesn't go in for dramatic fireworks; instead he understands that the most profound effects are felt beneath the surface."
Read more

"A lot of fraught talk about vague things and half-realized emotions, which results in what is, however comfy, a fraught, vague, and half-realized play…The conflicting notions of what the play is prevent it from ever fully cohering...The acting, though honest, is on the befuddled side…Daniel and Izzy's final scene together is a powerful tribute to the dying art of subtext. But as a whole, 'Indian Summer' fails because it wants everything but is willing to compromise on nothing."
Read more

"Gregory S. Moss’ 'Indian Summer' at Playwrights Horizons is an uneasy mix of two stories, the first about the doomed romantic encounter between two teens and the second concerning the quiet existential suffering of an elderly man. Despite sudden shifts of tone, Moss manages to leave the audience feeling deeply for each of these characters."
Read more