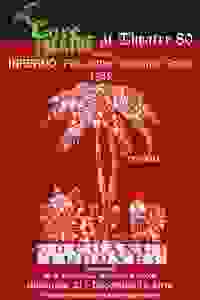 Inferno! Fire at the Cocoanut Grove: 1942 NYC Reviews and Tickets

This new historical drama explores the famously deadly fire that hit a Boston nightclub in 1942.

It was November 28th, 1942. Boston was alive with excitement as Boston College battled Holy Cross College on the football field. Cocoanut Grove, the popular, swank Boston nightclub was hopping with nearly 1000 revelers, students fresh from the game, servicemen on a weekend pass, newlyweds celebrating the beginning of their new lives, and even a Hollywood cowboy making the rounds to promote his upcoming film. In the midst of such gaiety, who could have predicted that a split-second mistake and greed could spark an inferno that would claim 492 lives, changing fire safety code forever.

See it if you want to see an out of town company with the courage to bring a production to NY to explore an historic event.

See it if You are interested in a sharp, witty play that captures its time. I wasn't alive then, but the characters took me there.

See it if you want to learn about a major tragedy that has been lost to history. Great dialogue, impactful acting, and wonderful attention to detail!

Don't see it if history doesn't interest you

See it if This is a must see! This play shows how events of the past impact our present and future.

Don't see it if There is no reason not to see this play! Read more

“This nonunion company is full of wonderful actors...capturing perfect accents and the feel of the era. The writing allows us to meet both the victims and the survivors on a personal level...Their stories are compelling, but at times it is too much. A little trimming especially of the musical numbers would have tightened the show. Despite that there is humor and when you hear the lack of concern over human life it is shocking...This play needs to be seen."
Read more

View in admin
B
Joel Brown

“After a slow start, ‘Inferno’ begins to gather strength in the first act...The heart of the second act consists of monologues by characters describing their experiences during and after the fire...The play’s pivot point is a single agonized speech by a firefighter...The play notes that laws were changed in response to the disaster. But...video from inside the Station nightclub fire in Rhode Island is projected...reminding us that some things never change.”
Read more

“Even though it details the deadliest nightclub fire in our history, the takeaway isn’t one of tragedy but reverence for life and hope for redemption...Prince uses direct address monologues by diverse characters involved with the catastrophe...The show closes with five unbroken minutes of the footage of the 2003 fire at the nightclub The Station in Rhode Island...It’s a powerful reinforcement to the message that life is fragile and precious.”
Read more