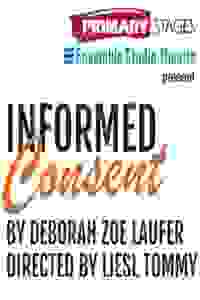 A geneticist is hired to figure out why a Native American tribe is being devastated by diabetes, but her research threatens to destroy the tribe's most sacred traditions.

With genomic breakthroughs happening at breakneck speed, we can learn more about what our futures may hold than ever before. But how much should we know? And who gets to decide? 'Informed Consent' - a co-production between Ensemble Studio Theatre and Primary Stages - is a drama about one woman’s quest to answer the mysteries of science in her career as well as in her home life. The play was inspired by a landmark court case between the Havasupai tribe and Arizona State University.

See it if you are fascinated by health issues (here, diabetes). Unfortunately, this piece lacks focus. It goes off the rails.

Don't see it if you want coherent story-telling. I felt frustrated by IC's rambling plot.

See it if you're interested in truly interesting story-telling about identity, from race to cultural heritage to hereditary illness.

Don't see it if you don't want to think about the issue of identity.

"A thoughtful and engrossing play...The director and excellent cast smoothly handle the play’s complex structure...'Informed Consent' has some speechy moments. But it raises provocative questions about the potential conflicts between scientific discovery and religious beliefs."
Read more

"There’s a big battle in 'Informed Consent' and it’s an oldie but goodie: science vs. beliefs. Nothing new under the sun here, but Deborah Zoe Laufer’s play trots along at a steady pace, carefully presenting the pros and cons of both sides with welcome flashes of humor."
Read more

"Deborah Zoe Laufer’s thoughtful and theatrical play is all the better for her main character’s thorny and complicated nature...While it moves smoothly, it is at times jarringly jokey. And having adult actors play kids who speak in a wittle baby voice is never a good idea. The same goes for a script that invokes the phrase 'Once upon a time' so much...In the end, the storybook phrase underscores that real life — mysterious and challenging — doesn’t come with happily ever afters."
Read more

"The science is quite fascinating and the conflicts exceedingly relevant; but as written and directed, the production over-reaches, with too many threads that seem to tie themselves in dramatic knots. The non-traditional cast is saddled with multiple roles requiring herculean stretches – not always successful...Lots to think about here, but in combining fact with fiction Ms. Laufer has bitten off more than she can chew."
Read more

"Deborah Zoe Laufer's probing and thoughtful 'Informed Consent' explores what happens when trust is violated...Liesl Tommy deftly directs this balancing act, marshalling the five-person cast to strikingly detailed performances for a play in which roles and locations seem to shift with the wind...Laufer pays respect to the technical without getting too bogged down in it. She knows her audience and how to challenge them to reexamine their preciously held beliefs."
Read more

"Under Liesl Tommy's direction, the story is told with light humor and without dense scientific terminology that might alienate the less-scientific among us. A solidly-written play that is sure to provoke discussion."
Read more

"There's nothing more painful than seeing a playwright tackle tough, thorny issues without the skill to bring their complexities to dramatic life. That's that sad case with 'Informed Consent...' Laufer isn't too particular about how she keeps the pot boiling, resulting in all sorts of implausibilities."
Read more

"Jillian and Arella's battle of wills, and the terrifying places it leads both of them, is a fascinating subject, and it's well handled by everyone while Laufer keeps her focus tight...But Laufer has so much to say that this energizing core does not get the consistent airing it should. It gets off track easily,..Only if it were honed to an excess-free state would this captivate you without making more of an appeal to your heart than your head; Laufer just seems more interested in the latter."
Read more

"This very appealing 21st century story offers a peek into science’s right to challenge cultures, customs and the intricate stories and tales that are passed down from generation to generation...The story weaves easily in and through Jillian’s personal challenges as the very authentic Ms. Benko must deal with her own family and colleagues and the greater questions that need to be answered scientifically...Director Liesl Tommy moves her players around with swift aplomb holding the audience’s curiosity."
Read more

"Laufer has created a disquieting but also invigorating play as well as a supposition: That the results of scientific research may be as stunningly indeterminate and inconclusive as is the belief and dependence we have on our eternal myths to validate who and what we are. This theme pervades throughout this thought-provoking play."
Read more

"Though the play has moments of tragedy, it is ultimately played with warmth, levity, and self-awareness, driven in part by the terrific physical performances of a refreshingly diverse cast...The character switching is abrupt and occasionally absurd, but it is never once confusing thanks to the subtle mastery of the characters and caricatures from the simplest facial adjustment or gesture."
Read more

"Under Liesl Tommy’s exquisite direction, the ensemble cast moves through time and space changes with ease and both narrate and perform this important story...'Informed Consent' raises significant questions...there is no right or no wrong here, just enduring and rich questions some of which are morally ambiguous."
Read more

"It is a dramatization in equal parts admirable and troubling...For all the fascination inherent in the subject, Laufer and director Liesl Tommy’s approach undermines the story...The bombardment of multiple themes and theatrical noodling is surely meant to keep the audience engaged, but ultimately has the opposite effect."
Read more

"Laufer and director Liesl Tommy do a great job blending all these elements into the show’s relatively short running time without making any of the scenes feel rushed. They’re even able to add some moments of levity, such as when Jillian and Graham meet for the first time...'Informed Consent' takes a hard look at a tough ethical issue and is not found wanting in what it presents."
Read more

"It’s the battle of religion versus science, and in Deborah Zoe Laufer’s thoughtful script, it receives an intriguing 21st century spin...Despite Liesl Tommy’s fleet direction, the production becomes a static and wearing affair...The result is a handsome package for this play that has at its core an important and timely debate. It’s rough, though, to not wish that the piece’s central question was explored in a more diverse manner."
Read more

"In August I saw one more show I’d like to add to this post — a new play called 'Informed Consent' which was written as part of an arts science grant. It follows the real-life events of a white professor at Arizona State University who took blood samples from members of the Havasupai tribe with the intent of studying their genes to find an explanation for the high rate of diabetes in their community."
Read more

"Laufer’s play sets out to challenge conventional ideas about science and storytelling, yet the dramaturgy can be as tangled as the four double-helix staircases that anchor Wilson Chin’s nifty set. The story appears initially to revolve around Jillian’s attempt to help the tribe find the cause of its alarmingly high rate of diabetes, but it veers towards the issue of informed consent and becomes didactic."
Read more

'Informed Consent; brims with color and life...Not everything in the play lands, however. While the cast is without exception talented and enjoyable to watch, the play’s young children are portrayed by adults, an exercise that never fails to induce cringing in this reviewer. And an epiphany experienced by Jillian at the end of the play seems a product less of character than of a desire for a tidy resolution. These minor flaws aside, “Informed Consent” is a compelling work."
Read more

"Sound like a downer? Not with the fertile imagination of Laufer. The audience finds themselves in a conundrum of whether to laugh or cry, often doing both...The ninety-minute play, presented without an intermission, holds the audience with excellent pacing and allows the fine writing to develop both the drama and the comedy."
Read more

"'Informed Consent' raises myriad questions on the complex intersection of modern science and the culture of indigenous peoples. In this gripping drama, playwright Deborah Zoe Laufer taps into the 2010 court case, Havasupai Tribe v. Arizona State University Board of Regents, and delves into a thought-provoking question: Does the potential benefit of biomedical research trump the value of individual human rights?"
Read more

"This has the potential of resembling a yawn-inducing, fact-saturated Discovery Channel report or a melodramatic Lifetime expose. Fortunately..., the playwright and director squeeze all the simultaneously disclosed science, personal crisis and philosophical debate into a beautifully woven, cleverly conceived and highly entertaining tapestry of storytelling."
Read more

"The best thing about 'Informed Consent' is the way the moral and ethical ground of the play constantly shifts beneath your feet. Watching it is like trying to balance on a fault line. One moment, all is quiet; the next, you're sent sprawling...The play is both cerebral and theatrical, making its case to head and heart: It is steeped in cutting-edge and forward-looking science yet grounded by the Old World comforts of religion and family and tales of love at first sight."
Read more

"The play instantly goes from being interesting and engaging to emotionally wrenching, and it stays there until the end."
Read more

"It seems as though Laufer attempts to add comic relief to the script; however, it is misplaced and hardly receives any laughs from the audience. Lightheartedness is out of place when addressing such a sensitive topic based on true events...Though momentarily shocked, I was pleased with this experience for the play aims to make individuals realize the importance of respecting differences in opinions and beliefs."
Read more