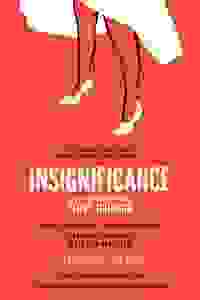 What if four icons of Ike's America - Marilyn Monroe, Albert Einstein, Joe DiMaggio, and Senator McCarthy - met in a New York hotel room in 1953? All four are tormented: the actress by her insecurity, the big hitter by his need for an heir, the scientist by his moral guilt over the bomb, and the politician by his paranoia. Directed by James Hillier, this site-specific production tells a story of what might have been in a meeting of four famous minds.

See it if You want a very cool theatrical experience.

Don't see it if revisionist history isn't your thing.

Don't see it if you are so young that you don't remember anything about the McCarthy era, Marilyn Monroe, Joe DiMaggio or Albert Einstein.

See it if You want to see something off-beat (staged in a hotel room) that deals with quirky, intellectual themes.

Don't see it if You only want the conventional in theater.

See it if you have an interest in history and want to see historical figures acted well.

See it if You like unusual settings. Being in a hotel room with the actors adds a lot to the ambiance and somehow helps you suspend reality.

Don't see it if You want a conventional plot.

See it if like a fun show. Interesting premise, well acted. Good chemistry between actors.

Don't see it if you don't like historical fantasy.

See it if you want to see an original site specific play, if you like immersive theater and don't mind sacrificing content for location and great look

Don't see it if you want to see a classic Broadway production with stage changes. If long dialogues bore you. If you don't understand english that well. Read more

See it if you'd like to witness some strong acting up close; you're nostalgic for the 1950s; are a fan of Marilyn Monroe or Albert Einstein.

Don't see it if you're looking for something truly immersive. It's site-specific but doesn't need to be - yet would the play hold up without the hotel room?

"An overstuffed fantasia about fame, sex and power built around an imaginary meeting of the minds in a New York hotel room in the 1950s...The revival makes for an intimate, well-acted gathering for 60 audience members, but the concept isn’t especially illuminating. It also highlights the contrast: five-star hotel; two-and-a-half-star play — one that doesn’t always avoid caricature and overly familiar material about four 20th-century icons thrown together here."
Read more

"Hillier has brought 'Insignificance' back to New York in a site-specific production, a choice that not only enhances the play's intimacy, but adds a nice dose of quiet tension...Though there are plot twists and coincidences that are a bit hard to believe, 'Insignificance' works well as a good story rather than as a significant play. The audience's familiarity with the characters ups the entertainment value. A fun change of pace, well-played and well-staged."
Read more

'There may be a reason that Johnson's play, written in 1982, hasn't been seen in New York before now. I'm afraid that 'Insignificance' is an all-too-apt title; the play is all concept and no payoff...A case of a problematic play further hurt by a kind of stunt production. Some extraordinarily people have been made unconscionably dull."
Read more

"I can imagine this playing off in a traditional setting, but within this intimate environment the insistence on sticking with the original material and interpretation feels inappropriate...This production does feature some very strong performances...The enormous effort shown by the cast can’t compensate for the disjointed production...These characters feel lost in completely different plays. It’s as if the actors have each been directed to run full speed in opposing directions."
Read more

"What is significant is that these characters are tropes for four of America’s most important sectors: the Sciences, the Arts, Politics, and Sports...Mr. Johnson’s script is wonderfully complex and replete with layer upon layer of meaning...See 'Insignificance' as soon as possible...Do not miss out on this rare opportunity to see important theatre performed in the most intimate of spaces where 'actors and audiences alike breathe the same oxygen.'”
Read more

"'Insignificance' might be the title of Terry Johnson’s beautifully nuanced play, but thanks to Director James Hillier’s careful direction and a flawless cast, the impact it leaves is quite substantial...[There are] many intelligent nuggets in Johnson’s brilliant script. His understanding of our common fears, desires, and disappointments is extraordinary...All four actors in this perfect piece are award worthy...The heady piece is perfect for a unique night on the town."
Read more

"Director James Hillier and his cast work with such unwavering confidence and control that you quickly forget where you are and find yourself completely absorbed by the material...You either go with this sort of thing or you don't, but if you do, you'll likely find yourself surprisingly engaged and even moved by the characters in 'Insignificance...Tremendous credit here goes to the performers, who give these famous figures an inner-life that far transcends the preciousness of the premise."
Read more