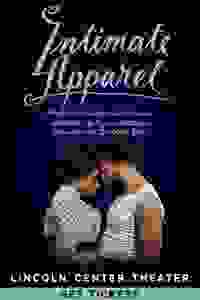 Set in 1905 in turn of the century New York, "Intimate Apparel" is about Esther, a lonely, single African-American woman who makes her living sewing beautiful corsets and ladies’ undergarments. There is warm affection between her and the Orthodox Jewish man who sells fabrics to her, but any relationship between them, even a touch, is completely forbidden. Tony winner Bartlett Sher ("South Pacific") will direct.

See it if If u like opera. This plot line is not deep.

Don't see it if If you want a fast paced show.

Don't see it if you do not like opera where every word is sung.

87
An opera for people who don't love opera; moving tale of love gone wrong for gifted black seamstress in 1905

Don't see it if this is not "Carmen" w tuneful arias; man does me wrong plot w racial angle unoriginal

See it if you love opera and want to see a very fine new one.Great libretto with real characters played by good singers who can also act.

Don't see it if you don't like opera or modern operas or don't like to read titles on walls. No hummable songs but 4 or 5 future concert arias in the opera. Read more

See it if you appreciate the talents of Lynn Nottage; great story with wonderful actors and singers; the Newhouse brings an intimacy to the play.

Don't see it if regarding opera, you prefer melody/aria to an entire two acts of recitative; wish I had seen Nottage's original play for comparison.

See it if moving story told by way of an opera, with an entire cast of amazing voices; easy to understand the story thru the lyrics and the excellent*

Don't see it if you need dialogue, a fancy set, and a happy story Read more

See it if Lonely woman wanting intimacy writes to a man in search for love. Social lines between men & women, race, & religion segregate their hearts.

See it if This beautiful opera with glorious voices as we see black live during the 1900s. Outstanding operatic singing.

Don't see it if you don't like opera, this is not your show.

"CRITIC’S PICK...In that sense “Intimate Apparel” — even more as an opera than as a play — is an act of rescue. When Esther tells Mrs. Van Buren, as they write the first letter to George, “My life ain’t really worthy of words,” she means that she isn’t special enough to be made permanent on paper. That isn’t true; as Nottage and now Gordon have shown, she is worthy of even more. She is worthy of music that is finally worthy of her."
Read more

"Yet despite this busy-bee fussiness, Intimate Apparel lets us come close to its characters, close enough to see the details — the loose button, the hesitant touch — that turn and shape the story...Did Intimate Apparel actually need to become an opera? Most of my pleasures in the show came from elements that are purely Nottage’s: Without Gordon’s music, it was already an exquisitely woven play, dense with threads about self-reliance, true seeing, and the necessity of touch. Some plays blossom when adapted (Sarah Ruhl’s Eurydice, for example) but Intimate Apparel stays almost unaffected by this particular conversion. As a proof of concept for an operatic co-production model, though, it was an inspired choice. Who doesn’t want to see this play again? In any form? And the concept works."
Read more

"The tight construction of the play, with its spare two-hander scenes and focus on the lives of ordinary and overlooked people, makes it a natural as a stripped-down chamber opera. It also suggests a future life among those musical companies looking for a small-scale, relatable work filled with emotional grandeur for specialized voices. Here in its Lincoln Center premiere, rich vocal talents fill Ricky Ian Gordon’s sung-through music not just with soaring notes but with heartfelt expression."
Read more

"Of course, just because a story feels operatic does not mean it can instantly and effortlessly assume the form of an opera — making Intimate Apparel's transfiguration at Lincoln Center's Mitzi E. Newhouse Theater all the more impressive. Directed by Bartlett Sher as more a chamber piece than anything Wagnerian (the performers are accompanied by only a pair of pianos, conducted by Steven Osgood), Intimate Apparel in its new musical form is allowed to keep its delicacy while also cutting enough seams to let its content soar to the rafters."
Read more

"Illuminated by Jennifer Tipton, it’s a set of various beds, a desk, a gambling table, an all-purpose door, and sewing-machine, Director Bartlett Sher, a prized Met-LCT veteran toiling away here, keeps the set spinning carousel-like on the much-worked (overworked?) Mitzi Newhouse turntable. The costumes are thanks to designer Catherine Zuber, who also made Esther’s clothes look so good off-Broadway. So, what about Intimate Apparel play and opera? As an opportunity to show off voices, the opera version could have a future. But a bet on the play remaining in greater production demand would probably not go awry."
Read more

"What is most remarkable about the new production, which is presented at Lincoln Center Theater’s Mitzi E. Newhouse Theater, is that it continues to function as a play. There is no flattening of nuance or emotion, as can often happen when properties are given the operatic treatment...What could have been an unwieldy feast of technical wonder has coalesced into a challenge to the world: Opera demands true storytelling, and when wedded with wonderful acting and directorial vision as it is here, the results are equal to and possibly greater than any play."
Read more

The new opera, Intimate Apparel is a very impressive, accessible work. If it has a fault, it is completely humorless but then the original play did not include comic relief either. Unlike Ricky Ian Gordon’s last opera, the recent Garden of the Finzi-Continis, the music here is not only beautiful but suitable and appropriate as the singers and the music are one. Lynn Nottage’s libretto is a masterpiece of economy, though her play was too. Will the opera supersede the play? Probably not, but it should certainly do well in other intimate opera houses where its charms can be fully appreciated.
Read more

"Intimate Apparel reveals and documents everyday working-class people’s plights, trials, and tribulations. What happens to the heroine Esther in this production is realistic and poignant. My wife, a product of a culturally diverse family, saw firsthand her mother’s life savings taken by her father to buy a beauty parlor for his paramour – leaving her mother and two daughters in severe financial peril. Shame is often why these incidents remain undocumented, and spouses are sometimes removed from photos. The intimacy of the theater with its excellent acoustics, sensitive lighting, multi-media projections, and Dianne McIntyre’s splendid choreography and staging provides a particularly accessible venue for opera."
Read more