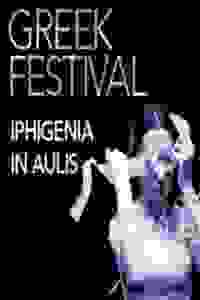 As part of their inaugural Greek Festival, Classic Stage Company presents this electric reimagining of Euripides’ rarely-seen final play in which a father is challenged to sacrifice his daughter to appease the gods.

Agamemnon, the leader of the Greeks, must decide whether or not to sacrifice his daughter, Iphigenia, to appease the goddess Artemis. Without the sacrifice, his troops will be barred from setting sail to battle Troy. Playwright Anne Washburn and director Rachel Chavkin team up with Indie Rock duo The Bengsons and choreographer Sonya Tayeh to create a dynamic rendering of an ancient story.

See it if you want to be moved by the love of a mother for a daughter, and by the powerful HAUNTING songs performed by the incredible chorus.

Don't see it if you need to be fully engaged in every single moment. There are some slow moments where the mind might wander (never for too long).

See it if You'll appreciate a respectfully playful approach to a classic text. Appealing performances (except a one-note Clytemnestra), lively chorus

Don't see it if Greek tragedies - where the doom-y denouement is never in doubt - are not your thing, or if you don't like the classics tampered with

See it if you want to see a cool reinvention of a classic Greek tragedy. Chorus was amazing and the songs were beautiful. Good elements of comedy.

Don't see it if you won't be able to understand English translated from Greek (it's not modern day English). You don't like melodramatic acting and crying.

See it if vivid staging, strong performances, and a breathtaking third act turn that crystallizes and dramatizes the problems of nationalism

Don't see it if you're not looking for political theatre

See it if you love the Greeks! you want to see a new version. you like Anne Washburn who is brilliant. you crave a cross dressed chorus with muscle

Don't see it if you want it in the original Greek. you don't like actors doubling. you want your theatre empty of meaning unrelated to this martial world

See it if you have an open mind and love gorgeously told, sweeping stories. And the Greeks.

Don't see it if there is no reason not to see this.

See it if You want to see a classic play in an original, entertaining production. While funny at times, it was also never far from tragedy.

Don't see it if You are a traditionalist who can't stand any changes bring made to a classic.

See it if you love Greek drama; you respect clear and truthful storytelling.

Don't see it if some strange design choices will ruin your night.

"This chorus is sure more fun to have around than the usual monotonously chanting sackcloth­and­ashes gang. A spectacularly made­over Greek chorus is the chief asset of this generally less confident version of Euripides’ 'Iphigenia in Aulis'...And when they join in with a sorrowful Iphigenia, intoning a lovely aria about the “eddies and whirls” of transitory life, they are everything a chorus — in the most classic and transcendent sense — should be."
Read more

"Rachel Chavkin's busy production is full of good components, yet so jumbled together, they jostle one another into a kind of stillness...Aesthetically, it's a free-for-all...The original text was a hotchpotch, full of later interpolations by writer. Perhaps Chavkin wanted to reflect that sense of a text in ribbons, but, like Agamemnon, she winds up sacrificing the most important things first."
Read more

"The animating force of the conflict is the military itself, a mortal mob yet godlike in its insatiable hunger for war at any cost. This is a viable interpretation but not, unfortunately, one the text does much to dramatize. Instead, director Chavkin offers marvelous spectacle as cover...Happily, most of the froufrou burns off as we get closer to the glowing core...Once all these adjustments come together, the production recovers from its evasions and is able to speak for itself."
Read more

"The biggest puzzlement behind this production’s disjointed, incoherent tone is that it was put together by two smart cookies. Adapter Anne Washburn gave us the sharp, offbeat 'Mr. Burns,' while director Rachel Chavkin was behind the inventively staged 'Natasha, Pierre and the Great Comet of 1812.' But in 'Iphigenia,' the audience is caught in a frantic whirlwind — have I mentioned the live folk-rock music? — that fails to create emotional traction."
Read more

"Acting is uneven and often overemphatic. Campbell nails a father’s grief, but an atypically awkward Gray channels Celine Dion as she pounds her fist against her chest. Costumes are head-scratchers. Lace-wrapped Sieh as Iphigenia, who goes from pawn to warrior, looks like 'Project Runway' gone wrong. Through it all, a distractingly busy chorus sings and dances in Crayola colors. The show’s just 90 minutes, but it’s still long-winded."
Read more

"A powerful Greek tragedy is reduced to rubble in a puzzling and off-putting Off-Broadway production of Euripides' 'Iphigenia in Aulis' at Classic Stage Company...Most confounding is the portrayal of the Greek chorus (which, by convention, comments upon the plot) by seven actors who sport ridiculous outfits and flower-decked headgear, move around feverishly and chant to an indie-rock beat."
Read more

"Typical of Greek drama, there are the searing speeches, soaring feelings, and a dazzling ending...Above all, however, is size: the sense that all of this matters from these earthly docks straight up to the apex of Mt. Olympus. With her transadaptation, Washburn does seem to understand this. Director Rachel Chavkin's work, on the other hand, does not. Chavkin has cooked away most of the nutrients and savor from Washburn's saga and left nothing but a muddled, watery broth."
Read more

"Anne Washburn’s transadaptation is a mesmerizing, groundbreaking update on Euripides' final tragedy...The brilliance of Washburn's universe is the subtlety of her historical and mythological revisionism."
Read more

"The horror of the situation appears less in the speeches and more often in the terrific indie-folk choral songs. These will give you chills, even if the scenes don’t always. But the language and the staging is almost never less than absorbing and what’s especially fascinating is the way the action of the play essentially constitutes the characters we come to know in Homer. What they endure here, Euripides’s play suggests, transforms them into the characters we recognize from the epics."
Read more

"This production of Euripides’s final play is a decidedly mixed bag. The text is a 'transadaptation' that throws in a few modern words for no particular reason...The thrust of the play survives, but this production’s innovations are not improvements."
Read more

"'Iphigenia in Aulis' is one of the most infamous stories, retold with supreme dramatic skill in a darkened room on a corner of 13th Street in New York City some 2500 years later. And this is the highest of compliments: it is received by its listeners not as reverent homage to any past, but as shocking news, only as old as the last hour...The language never flags, keeps our attention through the longest speeches, and above all, moves us."
Read more

"The big loss is this: Euripides’ poetry is largely unheard or turned fragmentary, re-arranged in jazzed up singing. But Eurpides has weathered more through time than a mis-conceived Chorus. The play leaves one stunned, breathless, and full of thought. In spite of all the misadventures that this play has experienced – at Euripides’ death his son or nephew wrote the ending, and since then it’s undergone copying errors and emendations — Euripides’ voice speaks to us."
Read more

"A play by Euripides is done no justice in this adaptation...Logic is the last thing you’ll find at this play, and it’s unfortunate that Amber Gray, the only person who had any talent on stage, will be tainted with this terrible mark on her resume...Save the $20 and 88 minutes, and go next door to Whole Foods to wait in that long line and spend your ticket money on a can of organic tuna."
Read more