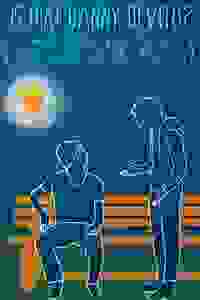 View in admin
Is That Danny DeVito? And Other Questions From West of the Hudson (FringeNYC)
NYC: East Village
88
Score it Scored!

Is That Danny DeVito? And Other Questions From West of the Hudson (FringeNYC) NYC Reviews and Tickets

Part of FringeNYC: In a new comedy inspired by the absurdist plays of Samuel Beckett, over-educated but under-employed millennials struggle to survive loopy locals and crippling neuroses while waiting for a perpetually delayed bus to their beloved Garden State.

FROM THE ARTIST:
Written in the style of the absurdist comedies of Samuel Beckett, the new play "Is That Danny DeVito? And Other Questions from West of the Hudson" focuses on the psychological non-adventures of two over-educated but under-employed millennials as they wait for a perpetually delayed bus to deliver them from their New England campsite to their beloved Garden State.

As they wait, Dusty (Julian Blake Gordon) and Geoff (Finn Kilgore) pass the time with the help of bizarre locals (Natasha Edwards & Carlo Fiorletta) and conversations on topics ranging from the millennial experience to celebrity culture, pop entertainment, literature, New Jersey, and whether or not a man unseen to the audience is Danny DeVito.

The Box Colony Theatre first produced "Is That Danny DeVito?" in conjunction with Art House Productions in Jersey City in October, 2015. The play was well-received by the community with Jersey City arts and culture blog ChicpeaJC.com saying: “With a number of knee-slappers and enough comedy to make you cry from laughter, it’s truly worth a ticket or two.”

See it if You are fascinated with differences between, quirkiness of and quests for purpose and personal brand of young males--timeless.

See it if You like a millenial take on Waiting for Godot that goes by faster than you think it will.

Don't see it if You need A/C. You hate plays where 2 people just talk to each other.

"A millennial version of Beckett’s 'Waiting for Godot' that weaves in great laughs...The play offers up touching moments of reflection on themes such as identity, friendship, and change...Levie is tasked with the tall order of staging a show that is primarily an extended conversation—she does this with tact and poignant humor…The play ends with a slightly clumsy wrap-up that could have been avoided had Doyle embraced the constraints of the Beckettian dream-state a little further."
Read more

"Gordon and Kilgore have great chemistry and make the most of the material they are given...They are everymen filled with hope, fear, anxiety, dreams, and knowledge. They are sensitive, abrasive, willing, and combative. They are human. Natasha Edwards as Ghoul and Carlo Fiorletta as Ass-Biter round out the competent cast. Amanda Levie moves the piece along at a comfortable pace but there is absolutely no need for an intermission which interrupts the tension and frustration."
Read more

"A modern riff on ‘Waiting for Godot’ packed with stoner intellect. Doyle has written a play that is witty and intelligent, poised to ask the tough questions we all ponder…Doyle has a promising voice...Even with waiting being the name of the game, 'Is That Danny DeVito?' was a ton of fun. That being said, it ironically ran ten to fifteen minutes too long...Amanda Levie's direction of Doyle's play was simple. The focus was on the words and the humor rather than the intellect."
Read more