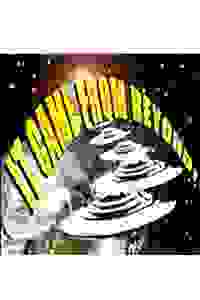 View in admin
It Came From Beyond
NYC: Midtown W
75
Score it

It Came From Beyond NYC Reviews and Tickets

'Grease' meets 'War of the Worlds' with comic books, aliens, and 1950’s dancing in this family friendly musical comedy.

'It Came From Beyond' takes place in a high school science classroom in 1959 and switches between two parallel stories. It centers on the nerdy, high school geek whose only chance to save the popular, beautiful girl that he loves, is to find the secret hidden in a new comic book called 'It Came From Beyond.' In the parallel story, an astronomer seeks the same secret in order to stop an attack on planet Earth from aliens from outer space.

See it if Sci-fi type show with singing and some dancing. A comic book bring a young man imagination to life.

See it if What if 50s Sci-Fi Comic Book came to life; nerdy high school kid becomes professor who saves earth from invading aliens and wins the girl.

Don't see it if You can’t go with a sci-fi fantasy melodrama where humans overcome fear and use a third-eye brain ray to free the world from alien control. Read more

See it if You enjoy campy and quirky stories and do not mind how ridiculous the story and the situations get.

Don't see it if If you Do not like campy comedy or offbeat storylines.

See it if You are a sci-fi fan. Want to here great pastiche music from the 50s & 60s. STANDOUT Kaitlyn Baldwin. Funny, charismatic and great voice.

Don't see it if This is not a off-broadway caliber production. Book needs work, Lyrics need work. It's a show in it's infancy that rewritten could be good. Read more

See it if you love 50's sci-fi flicks. The show had some good moments, but needs to be trimmed down a bit. The highschool scenes were kind of boring.

Don't see it if you can't sit still for 2 hours without an intermission. If you don't like campy shows, this is not for you. Read more

See it if You like camp & references set in the 50's, want to see a funny show, like the old sci-fi movies. A hoot!

Don't see it if If you don't like sci-fi or camp of the 50's, you want a serious show, or you have no sense of humor...stay home.

See it if you're in the mood for a campy, silly, high school type musical.

Don't see it if you can't watch a 2 hr show with no intermission. Probably a good thing there is no intermission; people probably would have left. (sorry!)

"A virtual laugh free, interminable, and unrewarding musical parody...There are some humorous cultural references and mild double-entendres but the stale plot hasn't been shaped into a compelling narrative and it all just isn't very funny...A fine pastiche of pop and show tunes but with 20 numbers, a good deal is extraneous...Though without any wow moments Blanchette's direction is solid...It hasn't yet acquired the alchemical qualities necessary for the campy spectacle it aspires to be."
Read more

"Emanating just enough charm and good will to keep from crashing...Christianson’s script is campy, but not sufficiently outrageous; other-worldly, but not scary. And opportunities to freshen the writing to reflect current political and societal upheaval have gone untaken...Humor is dished out in three varieties of vanilla. There are double entendres that range from painfully obvious to successfully silly...It is hard to spoof a low-budget movie when you are a low-budget stage production."
Read more

"A silly musical parody of vintage-style sci-fi, comic books, Cold-War propaganda, and song and dance...Directed...with an eye on kitschy humor, the show is chockful of nostalgic references to the popular culture of the era...Performances are campy and fun...without being so over-the-top as to become annoying...Despite the inconsistent vocals, absence of live musicians, and an early 7 PM curtain time, 'It Came from Beyond' is a lively send-up of the genre."
Read more

"The charming new comic musical...boasts an excellent cast with strong voices. Sharp direction and choreography enliven its tuneful, adventurous music, and taut construction – too rare in new musicals – makes it more than a collection of individual talents...Though the show’s characters unashamedly fulfill their stereotypes, they also grow deeper as the fun blooms and the tension in the twin stories mounts...A happy marriage of clever nostalgia, shiny new music, and sheer fun."
Read more