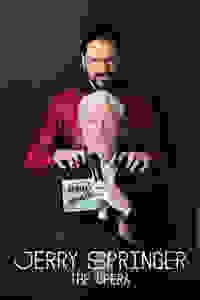 The New Group presents the Off-Broadway premiere of this gleefully profane musical about the infamous talk show. An outrageous celebration of our national ritual of public humiliation and redemption.

Jerry! Jerry! Jerry! It’s 'The Jerry Springer Show' as you’ve never seen it before, with passionate arias, soaring ballads, and giant production numbers. While the studio audience cheers, a parade of bickering guests fight and curse, until violence breaks out and Jerry must face his trickiest guest ever, the devil himself. 'Jerry Springer – The Opera' premiered in London in 2003, where it won numerous awards including an Olivier Award for best new musical.

See it if Zany musical parody full of sexual oddities. Creative first act has many surprises. Outstanding vocals. Performers are having a good time.

Don't see it if Concept runs out of steam. Second act felt forced. Trying too hard to be funny. The great vocals then seemed a bit pointless.

Don't see it if you mind dirty language and sex, loud noise, chaotic staging, bizarre situations, frantic plot, anything to do with Jerry Springer Read more

See it if you enjoy a raunchy, rousing musical/opera about Jerry Springer with all the outrageousness you can expect. Funny and irreverent!

Don't see it if you do not like raunchy subject matter, foul language and irreverent view of God, Jesus or Mary. The Devil gets equal irreverence. Read more

See it if a profane pop/rock/operatta based on the titular show isn't too edgy for you.

Don't see it if you have high expectations that the second act can top the first. There's something to offend everyone and they check all the boxes.

See it if you appreciate good vocal scoring and a large, energetic cast; you like edgy humor, being entertained and the Jerry Springer show.

Don't see it if you are easily offended and crude humor is not your thing. This didn’t make me want to see the TV show but I had a good time at the play.

See it if Act I is highly entertaining, and actors will interact with you especially if you're in the side section. Feels like the crazy talk show.

Don't see it if After the intermission just doesn't have the "fun" aspect of Act I, and starts to drag. Would be a better show without it.

See it if you like opera (with a difference).

Don't see it if you are easily offended. It's pretty much an equal opportunity offender ( cursing, fetishism, religion , you name it).

"Now that it’s here, it soars like never before, in a New Group production that fully finds the compassion within this singular show’s surface satire...Immaculately directed by John Rando and sung with incandescence by its 17-member cast...'Jerry Springer' now reveals itself to be a work of stirring prophecy, a hilarious and unexpectedly touching origin portrait of how we became who we are today...The pure, pulsing beauty of Mr. Thomas’s score hooks us subliminally."
Read more

"Exuberant high-low extravaganza...Under John Rando’s direction, the energy never flags, and the intimate thrust-stage set-up sucks you into the talk-show–audience mob even as it helps you appreciate their glorious voices. Its theology may not be deep, but beneath its sublime-to-ridiculous jokes, 'Jerry Springer—The Opera' is onto something about reality-show culture and the poignancy behind its debased participants—which more or less includes all of us now."
Read more

"Succeeds in its aspirations — up to a point. But the one-joke nature of the proceedings starts to wear thin even before intermission. And it's pretty much all downhill from there...Not surprisingly, the musical feels more than a little dated...While the audacity of the proceedings proves amusing for a while, the satirical humor never goes anywhere interesting or emotionally resonant...John Rando's small-scale staging proves inventive at times...The performers, however, are terrific."
Read more

"Surprisingly free of the sometimes savage cruelty that distinguished the show from its wimpy competitors...Deliciously dirty lyrics...The lyrics are even funnier set to Thomas's surprisingly delicate musical compositions...As one loser after another claims their 'Springer Moment'...None of this nonsense loses its charm...Until Act Two...At this point, everyone from Satan and Jesus to Adam and Eve get into the game, but sad to say, the humor falls flat and the show just isn’t the same."
Read more

"The one-joke show is past its sell date. Long past...So while it’s hard to recommend 'Jerry Springer,' it’s easy to acknowledge director John Rando’s terrific cast that’s led by Terrence Mann and Will Swenson...More standouts include Tiffany Mann as a pole-dancing hopeful, Luke Grooms as both a cheating husband and God, and Justin Keyes, as a gleeful self-soiler. It’s no fun shooting fish in a barrel — or a diaper."
Read more

"The cast approaches the material with sincerity...While this is all hilarious, it is equally disturbing and sobering...The second act takes on an absurdist, puzzling tone..Although original and interesting in concept, it is far less enjoyable and mostly falls flat. That being said, fans of edgy musical theater, contemporary opera and experimental drama will not want to miss the rare opportunity to take in this daring, difficult, culturally conscious, one-of-a-kind work."
Read more

"A lot of fun...Slam-bang staging...The first act is essentially an uncensored sung-through presentation of a typical broadcast...The amount of legit singing demanded by the score brings out the reality that the stories of passion, lust and revenge depicted in the most popular works of that lofty art form aren't very different from what's to be viewed on this supposedly low example of pop culture...A slyly delivered message of empathy for fellow humans just searching for their moment."
Read more

"A decidedly lopsided enterprise, with a first half that veers recklessly between exploiting and exalting Springer's fans and a second half that collapses from inaction...Nevertheless, 'Jerry Springer' is not to be dismissed, if only because the score is so accomplished...What may be the most vocally gifted cast in town...The music provides a certain amount of balm, but you have to have a real taste for nonstop vulgarity, and you have to tolerate a second act that has nowhere to go."
Read more