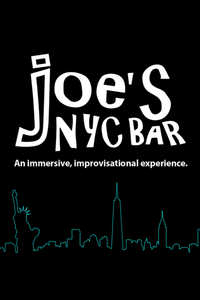 In this interactive, immersive, improvised show, the audience is invited to join the cast in seeking to build a global conversation about the world we live in.

Originally created for the 2001 Orlando International Fringe Festival, 'Joe's' has enjoyed various iterations over the years, and now makes its NYC debut. Performed in an actual Upper East Side Bar, the show offers a safe and intimate space for audiences to interact with a diverse cast of colorful and opinionated barflies about the issues plaguing our society in the days leading up to the inauguration of President-Elect Donald Trump. In addition to drinks, there is a different live musical act every night.

See it if You want to be a part of a lively conversation at a bar. Not a show really, more a platform for improv and audience engagement.

Don't see it if You want a narrative or don;t like bar settings.

See it if You enjoy talking politics in a bar setting. There weren't "actors" there were facilitators, there to get the conversation flowing.

Don't see it if If you go to the theater to escape the current insanity of the world. I don't want to pay to drink in a bar and talk politics.

See it if You want to engage in lively conversation, hate the 4th wall, and are up for some heated and relevant discourse

Don't see it if You like your theatre to happen on a stage. This is entirely immersive and much improvised. But hey, there's a bar! Read more

See it if you want to sit, drink, and listen to strangers meander through hot-button issues. You miss a neighborhood watering hole.

Don't see it if You live on internet forums or want something plotted or immersive but non-participatory. Read more

See it if You want to vent

See it if You are interested in a participative experience where you may not know the actors from the audience.

Don't see it if You don't like conversations in a bar. Read more

See it if You want to be part of an interactive, immersive evening that changes every night, you want a platform to vent or speak out.

Don't see it if You don't need to vent, rather see a show than an interaction, or you don't want to possibly hear about politics.

"Utterly engrossing...The characters are pure Americana and feel like they've come straight out of a Paul Auster novel and feel familiar to every local bar in the world...The actors inhabit their parts so well that it starts to become difficult to separate reality from the fantasy. There is no plot: it’s just people sharing jokes, telling stories and coming to personal realizations. It’s the sort of show that you’ll get more out, the more you put in."
Read more

"A funny and flawlessly executed show, where the barrier between the spectator and the spectated is removed...The success of the complete immersion is also due to the incredible realistic acting that is sustained throughout the entire show...With a refreshing format, relevant topic and exceptional acting, 'Joe’s NYC Bar' is an equally enjoyable and interesting experience. It doesn’t feel like you’re watching a play, but taking part in both a night out and a debate."
Read more

"This is immersive and interactive theatre at its best, a two-way conversation between audience and cast where invisible barriers are free to be broken down. The genius of 'Joe’s NYC Bar' is the ability of the cast to make their audience forget that they are watching a production...A unique cast of characters keep the pace going throughout, pulling the discussion in new directions...Intriguing, amusing and utterly absorbing, this show will leave you wanting to stay for one more drink."
Read more

"A tricky and difficult discussion to have to manage as a cast, yet the production team highlighted the importance of actually discussing these issues in a safe and mature environment...The production is not so much an immersive drama but rather a dissection of the audience’s thoughts and beliefs...A hugely entertaining and thought-provoking production definitely worth seeing and getting involved with, just be prepared for some hard truths and lots of cheeky banter with the bouncer."
Read more

"Between Gabriel, the owner, and Piper, bouncer, they keep everything moving and just civilized enough to be fun for everyone; whether you’re participating or watching. There’s a wild cabaret artist and band and drinks served throughout...This is incredibly well-conceived and executed by Christian Kelty and friends. If there is any weakness at all it would be that the 'story' plot of the evening seems just a little too contrived to finish the evening and probably not needed."
Read more