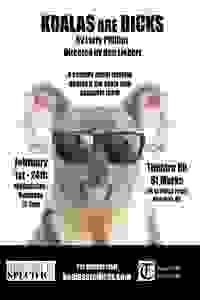 A dark Hollywood comedy about terrible people and the koala who supports them.

Brody, America’s favorite TV koala, has stormed off the set of his hit sitcom 'Koala in the House' and refuses to return to work until the producers agree to meet his demands for full creative control. Holed up in a sleazy LAX motel, Brody has enough booze and drugs to last for months. Desperate to get him back on track his agent, wrangler, and co-star try to make him see reason. But is their concern for Brody's future? Or their own?

See it if you love farce (I don't). A well-crafted script with merely ok actors (except for superb Dettmann). KAD needs lots of cutting. Very one-note

See it if a very enjoyable show with a lot of humor. It is in one act and one set, very clever in the way this play was done.

Don't see it if if you do not like dark humor that preys on a lot of lude and off color behavior.

See it if you like to laugh at farce à la Joe Orton, sitcoms à la Friends and satire/parody à la Seth McFarlane. [This is a 2nd rate mash-up of each.]

Don't see it if despite a clever concept, you expect an astute, original script. [There are lots of laughs, but mostly at the expense of timeworn cliches.]

See it if About a star koala, who is a tv star, who wants to leave tv, and his crazy people in his life, all takes place in a hotel room

Don't see it if this is very different, goes all over the place with drugs, sex.

See it if you like farce with a potentially interesting plot.

Don't see it if you have no patience for an overwrought, one note attempt at satire. Too bad, because the potential for something clever was there.

See it if Novel idea involving a koala (played by a human) TV star & his spoiled celebrity antics. Raunchy, silly & yet the laughs weren't there.

Don't see it if The acting wasn't bad, & yet the story was repetitive, characters clichè, & it didn't really go anywhere until the very end.

See it if You have low expectations. The premise was much better than the execution.

Don't see it if Tired jokes - even some bad puns. For what seems like it would be a hip show the humor was pretty stale.

61
Not as cool or funny as you might be expecting, Good idea gone lame

"If the premise of the play isn't particularly fresh there are several moments of hilarity that make the show entertaining enough...Liebert effectively injects a screwball spirit into a play that relies too much on crassness and absurdity, at times stretching punchlines way past their expiration date...actors give each other enough room to deliver jokes and develop chemistry...The play doesn't overstay its welcome and ends on a note that elevates everything else that came before it."
Read more

"The raunchy humor of Phillips’ writing is matched by Ben Liebert's dynamic direction, which gives a fine cast many opportunities to become physical...'Koalas Are Dicks' is a delight for those who are into rough adult humor with a hint of the absurd, especially if they despise show business. And the unexpected ending is truly rewarding and brings the one-note sitcom tone of the play to a new dramatic level."
Read more

"Perched on the perfect premise for a farce. Unfortunately, the play struggles for cohesion, consistency, and clarity...Had Phillips been more shrewdly selective, focused and tightly structured, much of his catch could have played quite effectively. As it stands, the play struggles between ideas and execution, ultimately thwarting any success as a farce...If Phillips were to revisit the script, he would do well to consider the crossroads of comedy, tragedy, and farce."
Read more

"It's a fairly well structured play; a decently crafted ride from start to finish. It's just not for me...Madcap hilariousness should be in full swing, and it is, if adolescent humor and ridiculousness is your cup of tea. If not, the play tends to wear pretty thin even as it merrily rolls along...If this is your kind of humor...you’ll have a good time and you won’t sweat the small stuff, enjoying the raunchy humor of this play....If it is not, and I'm definitely in the camp, you will tend to get a bit worn out."
Read more

"It’s an evening of bad behavior, and essentially an extended sketch. And Phillips can’t sustain it, though he comes up with some fun ways of trying...It’s cheerfully amoral, and one wishes Ben Liebert, the director, had brought more discipline to it. His directorial style is largely have-the-actors-face-front-and-shout...This stuff probably plays better in L.A....'Koalas Are Dicks' is potty-mouthed and inconsequential, but you’ll probably have a good time."
Read more