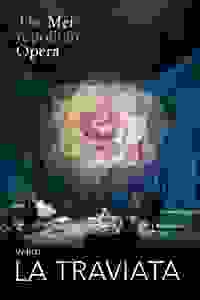 The return of Giuseppe Verdi's classic operatic tragedy about love and sacrifice.

La Traviata tells the tale of the doomed romance between the courtesan Violetta and the dashing Alfredo Germont. Amidst the backdrop of a hypocritical upper-class society, Alfredo and Violetta’s love courts the ire of Alfredo's family.

See it if you wish to hear one of Verdi's greatest operas with wonderful singing, great music and fantastic production.

Don't see it if you don't like operas. I recommend this opera for those who don't go to opera. The characters are great and so is the music. Read more

See it if Outstanding production of Verdi's classic of love and sacrifice. Nadine Sierra was outstanding as Violetta and Stephen Costello as well

Don't see it if Portraying alfredo. I can't think of any reason not to see this wonderful production.

See it if Not a fan of the staging--done on the cheap and why is the bed there forever. However, everything else is wonderful. Great singing, acting

Don't see it if you do not like or love opera as an art form. this is great classic theater beautifully performed.

See it if A first rate production of one of the best operas. It's light and fun and then suddenly it's infuriating and deeply, wonderfully sad.

Don't see it if It's not as feminist as it could be and the main plot point that makes it so tragic isn't ever REALLY explained. But it's still fantastic.

Don't see it if You are not a fan of traditional opera and like the NEW atonal productions of what is called Opera, but is NOT Opera!

See it if A beautiful production with a caste of stellar singers. Verdi at his best.

See it if you want to hear a prima donna at the height of her powers. Nadine Sierra is a vocal wonder and great actress, she makes this worth seeing

Don't see it if you want a set that makes any sense or a strong supporting cast. Other than Sierra and the orchestra this production is just serviceable Read more

See it if You love classic Opera, sung by the best artists in a world, in a world famous setting (Met Opera)

"Mayer’s production has always looked a little more like Disney’s 'La Traviata' to me—the golden vines that wind about the stage and garish colors frame the story as we are jumping into a fairy tale. If it’s a fairy tale, however, it’s also a ghost story.."
Read more

"There will be many opportunities to see 'La traviata' this season with three different casts and conductors. This performance set the benchmark high."
Read more