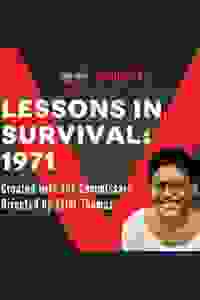 Reintroduces conversation between Nikki Giovanni and James Baldwin to our present moment.

In 1971, 28-year-old poet Nikki Giovanni had a candid, provocative interview with renowned novelist James Baldwin, 47, on America’s first “Black Tonight Show,” SOUL! This play builds on the digital exploration of 'Lessons in Survival,' which was named as one of The New York Times' Best in Theater 2020.

The show was co-conceived by Marin Ireland, Peter Mark Kendall, Tyler Thomas, and Reggie D. White, and created with The Commissary, a multigenerational collective of more than 40 ​theater artists.

See it if you're interested in a staging of a fascinating, wide-ranging conversation between Nikki Giovanni and James Baldwin

Don't see it if you are looking for a plot-driven piece that is more than a documentary style glimpse of an existing, real-life interaction between the two Read more

See it if A reenactment of a television program with James Baldwin and Nikki Giovanni--with discourse on race and sexism. Profound. Contemporary.

Don't see it if Clever use of media but primarily a complicated conversation that required the audience to listen. An hour and half---no intermission. Read more

See it if If you must…

Don't see it if You want to see a play — this was not a play — it was a verbatim recreation of a conversation. Read more

"The conversation runs to 90 minutes, and there are certainly longueurs, particularly in the passages when Baldwin and Giovanni square off at length over their different perspectives on the tensions between the sexes. But the predominant, and dispiriting, conclusion you inevitably draw from this unusual act of theatrical reclamation is that, with minimal updating of the dialogue ... , a very similar exchange of ideas could be taking place today."
Read more

The result is an engaging tussle between two generations and a fascinating immersion in the racial issues of the era -- which are revealed to be pretty much those of today.. Lessons in Survival: 1971 offers the excitement of two unorthodox, well-honed minds exploring the scar tissue at the heart of the American experiment.
Read more

"The conversation remains (tragically) as relevant today as it was in 1971. Comments about noted educator and activist Angela Davis coming under legal fire takes on new resonance amid contemporary calls to suppress teaching about racism along with efforts to ban books about race and sexuality. As Baldwin reminds us, 'A teacher who is not free to teach is not a teacher.'"
Read more

"'Lessons in Survival: 1971' has a certain power — maybe especially for those who’ve never seen Baldwin or Giovanni — but its ultimate merit may lie in pointing the way to the actual interview available this very minute on YouTube."
Read more

Originally broadcast on "Soul!," an early PBS program dedicated to showcasing Black arts and politics, Baldwin and Giovanni's one-on-one echoes contemporary concerns while also remaining decidedly of its era. Unearthed by a theater collective and other trapped-at-home artists during the pandemic for an online recreation, it has now been transformed again, this time into a staged adaptation titled "Lessons in Survival: 1971." In truth, "googled" is likely the more appropriate verb for how someone found the Baldwin-and-Giovanni conservation, since it is entirely available on YouTube, where, to be honest, it is best experienced, not least because in that digital form it can be rewound for another listen, which a few of Baldwin and Giovanni's complex, unannotated arguments definitely require.
Read more

"The conversation is so elevated and so deep that you just have to give over to it, because trying to get ahead of these two is nigh on impossible. Off hand I cannot think of a topic that is not covered, turned inside out and pushed on to the next topic."
Read more

a worthwhile conversation, full of important points briefly discussed that deserve – need — elaboration, illustration. Indeed, some of what these two great writers discuss could be – indeed have been – the subject of entire plays…[D]eliberately intrusive sound effects and video effects… were for me an argument against having turned this 50-year-old exchange into a play, especially when the original conversation is readily available on YouTube
Read more