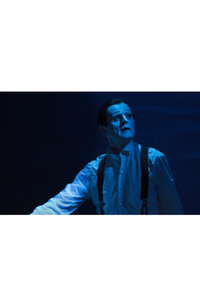 View in admin
Letter to a Man
NYC: Brooklyn
61
Score it Scored!

Letter to a Man NYC Reviews and Tickets

Mikhail Baryshnikov steps into the splintering psyche of a legendary 20th-century dancer in Robert Wilson's staging of Vaslav Nijinsky’s diaries.

The text chronicles the onset of the iconic Russian performer’s schizophrenia in 1919, tracing the contours of his profound isolation, tormented sexuality and spirituality, and preoccupation with erstwhile lover and Ballets Russes founder Sergei Diaghilev. Hal Willner’s collage-like score weaves audio fragments of the diary with a century-spanning soundtrack of songs by Tom Waits, Arvo Pärt, Henry Mancini, and Soviet futurist composer Alexander Mosolov, as our coat-tailed subject sashays and staggers through Wilson’s saturated lightscapes.

See it if you are open to a unique theatrical experience performed by a master of the performing arts. Brilliant, disturbing and an assault on normal

Don't see it if you need coherent plot, logic and a sense of order. You must suspend normal expectations to dive into the mind of someone disturbed

Don't see it if you have a choice

See it if Fan of Mikhail

See it if you like a visual masterpiece that dazzles the eye and the senses or if you need to see Mikhail Baryshnikov on stage.

Don't see it if you have no patience for repetitive dialogue and obscure imagery or want to pay way too much for only 70 minutes.

See it if All things Robert Wilson and/or M Baryshnikov intrigue you. You like avant garde stagings the farther out the better.

Don't see it if you expect real dancing from Misha. You need some cohesive meaning in your theater and not just random bits thrown against the wall.

See it if you will glory in watching Baryshnikov on stage for an hour - he is so magnetic and enthralling to watch.

Don't see it if you want a linear & coherent story. I really felt Nijinsky's madness in the lack of story & clarity.

See it if you want to see Mikhail Baryshnikov on stage - I did! He is absorbing in even the slightest movements. You are a Robert Wilson fan.

Don't see it if You don't like avant-guarde theater. It is not for the timid, easily bored or confused. Sometimes off-putting, but compellingly staged.

See it if you are a fan of Baryshnikov, Nijinsky or general dance history...are into breathtaking visuals...are a brave theatre/concert goer.

Don't see it if you know nothing about Nijinsky... requires homework...and you'll still be confused in places...If you aren't an abstract thinker, stay home

"An opaque and frustrating work of dance theater...Mr. Baryshnikov is a captivating presence...Unfortunately, for all Mr. Baryshnikov’s efforts, 'Letter to a Man' remains stubbornly obscure and theatrically lifeless, despite a wildly eclectic soundtrack...For those unfamiliar with the diaries (as I mostly am), bewilderment and eventually boredom are likely to be the primary reactions to the show...I’m afraid 'Letter to a Man' does more of a disservice to Nijinsky than it honors him."
Read more

"This dance-theater production squanders both its star and its provocative subject matter with its enervating concept and pretentious self-regard...The experimental theater director has been regurgitating his stylistic tropes for so long that they have become a virtual parody of themselves...At age 68, Baryshnikov remains a marvel to behold, moving with seemingly effortless grace and precision...It's all the more a shame, then, that his talents in this case haven't been put to better use."
Read more

"Like a Rorschach test, you can probably find whatever you’re looking for in all this, and Wilson and Baryshnikov never cease to conjure an engaging sensory spectacle...What’s missing is appropriate musical accompaniment. Hal Willner’s score often sounds platitudinous...'Letter to a Man' consequently never quite replicates the hypnotic strangeness of Wilson’s greatest work...Wilson also seems a bit too content to keep recycling the same tropes and techniques."
Read more

"The reviewers seemed to find it incoherent and dull. We (my husband and I) found it fascinating and quite clear in its intention...At sixty-eight, Baryshnikov, one of the greatest dancers of the twentieth-century (I am glad I saw him in his prime with ABT and the City Ballet), is still a potent performer. Baryshnikov has always been open to new challenges. He moves gracefully and is blessed with an expressive face."
Read more

"Music associated with Nijinsky is never heard, but Baryshnikov occasionally quotes him in movement...He is riveting. It is a joy and the ultimate dance lesson watching him walk across or backwards in one memorable sequence...'Letter to a Man' never pretends to be an homage to its subject. What it allows is one great dancer inhabiting another and all the terribleness accompanying his legacy."
Read more

"Nijinsky's a role Baryshnikov was born to play...Visual marvels by Wilson, including a breakaway straitjacket, the figure of Diaghilev floating in a bathtub, a flaming sword that melts into a crucifix, and a cutout child leading a large, flat chicken across the stage, illustrate the evolving madness...But finally it is Misha's dancing, light and fleet soft-shoe steps below his white tie and tails, that tears at the heart."
Read more