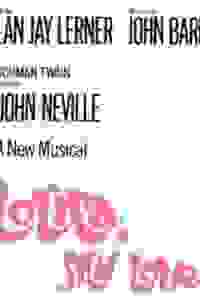 “Lolita, My Love” closely follows the legendary novel: a college professor named Humbert Humbert becomes fascinated by and starts to seduce his landlady's young daughter, Dolores "Lolita" Haze. The fascination quickly turns into obsession, and soon a whirlwind race across the US begins. For this Mufti presentation, Erik Haagensen has edited together a new script from Lerner's assorted drafts, each vastly different from the others.

“Lolita, My Love” is part of The York's "Musicals in Mufti" series, a series of script-in-hand, concert revival readings presented in everyday clothes and with minimal staging.

Don't see it if the content is triggering. Disturbing story of hebephilia, esply given 2019 headlines abt Epstein et al. Still, a strong, memorable prodn.

See it if Complex & effective rendition of the novel as a musical. Sickening but also moving, clever & humorous. Excellent vocals & staging.

Don't see it if You aren’t up for a twisted main character. You don’t like the mufti presentation (use of scripts & one piano).

See it if you're curious about the musical & a fan of Lerner or Barry, you want to see how novel was adapted, you enjoy the York's Mufti series

Don't see it if turned off by the subject matter & peppy" songs in a serious musical with serious subject, don't like minimal sets, costumes, single piano

Don't see it if You want full fledge musical with good book and music.

See it if You want to see how a musical about a pedophile--when skillfully handled--can have you sympathizing with him, against your will at times.

Don't see it if The subject matter is a delicate one for you, or if you really don't care about anything but Lerner's popular shows. It's once in a lifetime

See it if You want to see a quintessential mufti performance of a show that never made it to NY . ..controversial at best

Don't see it if Don't think obsession and pedophilia mixed with murder are the stuff musicals are made of .

See it if you're interested in a historical flop with some surprisingly great tunes and a compelling frame narrative around Nabokov's masterpiece.

Don't see it if for better & worse, this hews closely to the plot of the novel. There is a lot of talk/portrayal of sex with an underage girl. 3 hours long. Read more

See it if You want to be entertained and disturbed in equal measure, you want to see a musical adaptation of one of our Great Novels

Don't see it if The pedophilia of it all is too much for you to handle; you don't want to sit through a quite long musical (2:45)

“Nearly fifty years after its initial commercial failure, 'Lolita, My Love' in its current form is revealed as a well-crafted musical theatre piece with fine wit and attractive melodies. Perhaps that's not enough to get it to Broadway, but it's certainly enough to earn a visit to The York's excellent production."
Read more

"Maltby, works thoughtfully and well, maintaining a good pace during a lengthy, exposition-heavy first act...She has a stunning Humbert in Sella, who handles his ballads in achingly controlled fashion...'Lolita, My Love' constitutes a daring stab at the impossible, and all thanks to the York for letting us finally get a look at this sometimes brilliant, often misbegotten work. It offers living proof that some failures are more interesting than some successes.”
Read more

The writing's smart and enveloping, as we'd expect from a master like Lerner; it's just about something profoundly disturbing. Maltby's direction, clarifying the truth vs. Humbert's version of it and framing the action is a huge help. So is Sella. His Humbert is wonderful casting...The subject matter is just too upsetting, and even Haagensen's expert blending of drafts can't obscure some structural liabilities."
Read more

"The York Theatre Company is to be applauded for taking the risk of staging this famously controversial musical in its New York premiere. As Alan Jay Lerner is one of the legendary giants of the musical theater, it is a pleasure to be able to see this lost musical in a workable version. However, despite the excellent staging of director Emily Maltby, 'Lolita, My Love,' the casting still seems problematic and the musical is ultimately disappointing."
Read more

"There’s much to admire in director Emily Maltby’s presentation...Lerner’s book is turgid. The run-time of three hours is too long. It’s as if he forgot he was writing a musical with long patches of exposition without song. And some of the songs are snippets versus full numbers...'Lolita, My Love' is best for those who must see the entire Lerner cannon or the theatrically curious."
Read more

“There’s a reason this show closed out of town. The unsavory material resists rehabilitation...The musical is heavy, imbalanced, and way too long...The cast does its best, but they cannot shift this material into second gear...'Lolita, My Love' does have a couple of good songs...’Lolita’ should be an opera...It demands texture and depth. As a musical, it is impossible to find the balance between weighty material and palatable composition."
Read more

"After seeing this musical, I completely understand why it failed. The production and the York do a superb job of this material, but it is incredibly hard to watch...Some of the songs in Lolita are catchy and the First Act is definitely better than the Second...Sella does his best to make us understand his plight while sounding glorious...Maltby does a wonderful job at directing this piece and keeps it flowing and palatable...For me it is just too much to take when done in song."
Read more

"It is definitely worth this fresh look in the concert style staging...The difficulty with the work—and I speak of the musical itself, not this presentation—is that as it grows more and more complicated and serious, Nakokov’s satirical vision is overshadowed, and the right tone that we experience in the first act, is lost. Although there still are some good numbers that Lerner wrote, the story turns primarily nasty...An interesting attempt to make a musical out of a difficult subject."
Read more