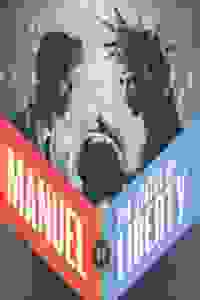 View in admin
Manuel Versus the Statue of Liberty
NYC: Midtown W
100
Score it Scored!

Manuel Versus the Statue of Liberty NYC Reviews and Tickets

Part of the New York Musical Theatre Festival, a comedy about illegal immigration portrays the challenges faced by an Ivy League student who can’t leave the U.S. to accept his scholarship to study at Oxford.

This Latin-infused American musical is inspired by the true story of a Princeton undergrad who was an undocumented child immigrant from the Dominican Republic. When Manuel gets a Rhodes Scholarship to study at Oxford, he’s faced with the realization that he can't leave the USA. He takes on the Statue of Liberty in the fight of a lifetime: the high-stakes boxing match that is immigration today. Is Manuel worthy? No one is spared in this political comedy that pulls no punches about immigration reform and the American Dream.

See it if you like outrageous comedy and catchy latin-infused hip hop.

Don't see it if you're not a fan of rap.

"The U.S. is currently embroiled in an intense discussion about immigration and how (or if) it should be reformed; 'Manuel Versus the Statue of Liberty' adds nothing to the conversation except a droning voice spouting talking points we've already heard countless times. Maybe instead it should look a bit harder for a real reason to sing?"
Read more

"'Manuel vs the Statue of Liberty' is an essential piece of musical theatre that captures lightning in a bottle, it encompasses the current state of America in an objective way, and while it dares the system to truly fight for the pursuit of everyone’s happiness, it celebrates the cultures that make the country a dreamland of possibility."
Read more

"The concept is smart. It sets the story apart but the execution of the idea pulls the musical down severely. With a blurry directorial vision and material that needs to be fleshed out even further, the libretto needs assistance. 'Manuel' doesn't really know what it is...There is promise in Manuel vs the Statue of Liberty but until it picks a singular journey, it will continue to suffer from being mediocre."
Read more