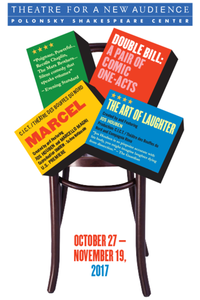 View in admin
Marcel and The Art of Laughter
NYC: Brooklyn
84
Score it Scored!

Marcel and The Art of Laughter NYC Reviews and Tickets

Theatre for a New Audience presents this double bill of comic one acts. 'Marcel': a poignant two-hander about the collision of clowning and mortality, and 'The Art of Laughter': a comedy about comedy.

'Marcel': From Théâtre des Bouffes du Nord, the Parisian home of Peter Brook, comes this story of an aging physical comedian and an inscrutable, clipboard-wielding nemesis mysteriously enjoined to test him with a battery of absurd tasks. In 'Marcel' slapstick meets the limits of age.

'The Art of Laughter': Jos Houben dissects everyday life – a baby’s first steps, a man falling in a restaurant, the essence of various cheeses – revealing why laughter is at the core of our humanity. Part performance and part masterclass, 'The Art of Laughter' is about comedy at its most fundamental--what makes audiences laugh.

See it if You want to see a masterclass in physical comedy then get a very funny lesson about how it’s done. Delightful and clever. Talented players.

Don't see it if You don’t like slapstick or physical comedy or would prefer to see a play or musical. This is neither.

See it if Marcel: aging performer tries to pass an existential test about nothing. Art of L: how loss of dignity underlies humor. Wonderful stuff.

Don't see it if You are not interested in physical humor plus some underlying pathos and meaning.

See it if you enjoy a show of comedy that is intelligent as well. The second act very different from first, a master class about the art of comedy

Don't see it if you don't enjoy comedy of any kind. Read more

See it if mastery of the audience laugh mechanism, gentle human comedy, classic mime & clowning can hold your interest for 2 hours

Don't see it if physical comedy. non-verbal storytelling, European clowns, class on why we laugh, are not appealing to you

See it if You like to laugh and want to see two Master craftsmen show you how it is done. One is an amazing clown act, the other is a master class.

Don't see it if You don't like to laugh, don't like shows that don't necessarily have an understandable ending, or don't enjoy the breaking of the 4th wall

See it if You enjoy physical comedy by two experts and a second half master class that is great fun.

Don't see it if Physical comedy is a turnoff Read more

Don't see it if You prefer comedy with a story line.

See it if You're up for two short comic pieces:a short silent physical comedy, and a lecture/demo of how & why human beings are hard-wired to laugh.

Don't see it if You're expecting plot or dialogue; both are minimal. Read more

"’Marcel’ and ‘The Art of Laughter’ are more amusing and instructive than hilarious. Your gut will remain unbusted...'Marcel': Though many bits are delightfully imaginative, others cross the whimsy line and become cloying...'Art': In the manner of a professor studding a seminar with demonstrations, Houben shows that he can manipulate our laughter as easily as Marcel manipulated the bowler hat earlier...Houben’s astounding mimetic skill is not just math, it’s showmanship."
Read more

“In ‘Marcel’, Magni strives to surmount inane barriers to success, his taskmaster seems determined to keep raising the bar. While this business is not always funny, Magni’s charm keeps it from being tiresome...The show perks up when Houben takes the stage in his ‘The Art of Laughter’...He embarks on a practicum of fumbles and pratfalls; his minutely calibrated body language is brilliant.”
Read more

"The performances are elegantly minimal; there isn't a single excess gesture. Even when the action turns relatively frantic, you feel that both are totally in control -- almost relaxed -- as they practice their own personal brand of mayhem. 'Marcel' and 'The Art of Laughter' offer something very rare -- humor in its purest form, presented with no small intelligence and cockeyed goodwill. It is all but guaranteed to give you a lift."
Read more

"'Marcel' is an hour-long mediation on time and aging...Whether it’s all actually funny and profound is dependent on one’s taste. It’s possible to be in hysterics or bored due to the length...'The Art of Laughter' is a droll lecture superbly delivered by Houben...For an hour, he commandingly exhibits his sensational movement skills and his effortless and highly effective comic timing...This second portion of the show is supreme entertainment."
Read more

“In 'Marcel,' an extended…vaudeville sketch, the audience is treated as both Magni's friend and…his enemy…His character…is a deceptively hapless everyman bumbling with masterful aplomb to hide the infirmities of age…Poignant and well done as it is, it's not quite up to the imaginative level of 'Old Hats'…'The Art of Laughter'…is a fascinating, hour-long monologue by Houben, which begins slowly and soon enough ensnares you in what is closer to a lecture-demonstration than a 'play.'”
Read more

“A study in contrasts...Many in the audience found 'Marcel' breathtakingly funny. For those of us who couldn't figure out what was so funny about 'Marcel,' Houben attempted to provide the answer in 'The Art of Laughter'...There is something quite American about their humor. This is probably because slapstick has a unique language that does not entail words...Some people find this language very funny. Some don't.”
Read more

"The two are quite charming and playful...'Marcel' is pretty silly and slapstick, particularly with a joke involving a bottle of water, but becomes rather poignant...If 'Marcel' demonstrates the pair’s predilection for pratfalls, 'Laughter' deconstructs them. A 'master class' in how to elicit laughter...The sequence of the two plays is brilliant...Masterful creations of physical performance from two seasoned artists. The hilarious antics of Houben and Magni are a joy to watch."
Read more

"'Marcel' has a particular European sensibility that’s engaging, offbeat and sometimes strangely familiar...Although there is speaking in the piece, the primary thrust is physical business rendered with precise comic timing...More often the comic business just arises spontaneously...The end has some unexpected poignancy...Both men are connoisseurs at what makes an audience laugh, and the whole production is both informative and full of delights."
Read more