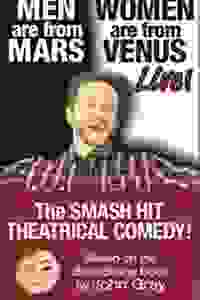 View in admin
Men are from Mars, Women are from Venus
NYC: Midtown W
84
Score it Scored!

Emery Entertainment presents a touring solo show; a theatrical fusion between theatre and stand-up, based on the best selling book by John Gray.

Performer Peter Story stars in a one man play about how couples can bridge the interplanetary gulf between the sexes. The play's narrator resisted the Mars/Venus theory for years, but after he meets John Gray, he is a convert. This 90-minute show will have couples elbowing each other all evening as they see themselves on stage. Presented via different vignettes, topics cover everything from dating to marriage to the bedroom.

See it if You want to see a one man show by Peter Story who absolutely wants to entertain and engage the audience.

Don't see it if If you get offended by cliche' male and female characteristics.

See it if you are married or in a relationship; if you like comedy about differences in men and woman. Nothing ground breaking here.

Don't see it if hearing about the cliched differences between men and women are not your thing; you want to see something new and original

See it if this show is hilarious, you want a laugh its so worth seeing

Don't see it if if you don't like to put a smile on your face stay home.

See it if want to laugh and have a good time

See it if You want to laugh and not read into anything. It us a pure joy!

Don't see it if An Archie Bunker type or stuck in time!

See it if I don't think you can ever come away fully knowing the opposite sex but it's an entertaining way to try.

Don't see it if Children under the age of 15

See it if You want to see a riveting show that will astound you.

Don't see it if You you want to laugh.

"Peter Story brings an awful lot of energy and an engaging delivery to 'Men Are From Mars, Women Are From Venus, Live!' a one-man show at New World Stages, but his efforts don’t always overcome the creakiness of the source material…The stage show feels like a sort of retro stand-up comedy routine for a Catskills crowd…Mr. Story is a fine storyteller, personable and enthusiastic, and he throws in some amusing interplay with the audience. But he is often selling moldy material."
Read more

"While the show is amusing throughout, it is somewhat dated as it assumes that a couple is in an old-fashioned traditional relationship...It doesn’t deal with non-traditional relationships like stay at-home dads or other situations that don’t follow the paradigm under consideration. Nevertheless, Story is an engaging narrator and raconteur and he holds up well using his own mistakes as a model of what not to do."
Read more

"While the performance is able to keep audiences engaged over the course of its roughly two-hour run, the ultimate end goal seems a little muddled. Once you accept that 'Men are From Mars' is less play and more stand-up comedy, it’s easy to forget the prerequisite needs we audience members have in attending a theatrical production... Director Mindy Cooper has cleverly crafted a piece that relies heavily on the strengths of its lone ranger."
Read more

"'Men Are from Mars, Women Are from Venus Live!'...is actually a standup comedy act inspired by Gray’s book and performed...by a really funny, LA-based Martian...named Peter Story...It’s too long, and its generalizations are arguable, but it’s a painless way to get a bite-sized idea of what the fuss is all about."
Read more

"While much is entertaining here, the show seems somewhat dated. Story is continually drawing on material from Gray's book, published in 1992. Consequently his monologue becomes very tethered to the social mores of the 90s...The target audience members are those who feel at home with the old-fashioned paradigm of marriage (and dating). Still, Story has his heart in the right place and his enthusiasm for Gray's principles is genuine."
Read more

"The good news is this is a show men will want to see. For those who love stand-up comedy you will be entertained. I just found this boring and the perfect non drug version of Ambien."
Read more

"Peter Story owns the place. For those needing a little help in the relationship department, this show is a great date night. For all those single ladies and gentlemen, there will certainly be something to appreciate, but you may not feel completely welcome to the party. And that’s all due to the shameless inclusion every moment Story references the couples, and the single people, in the crowd."
Read more

"With perfectly-timed jokes, hilarious physical comedy and a laugh-out loud funny script—'Men Are From Mars, Women Are From Venus Live!' is raucous in its relatability...Story needs no lights, no set and no soaring orchestrations to have everyone in the audience nodding in understanding, clapping in collusion and laughing along with his illuminating realizations about relationships."
Read more