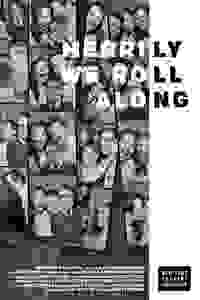 Taking place over the course of three decades in the entertainment industry, "Merrily We Roll Along" tells the story of the tempestuous relationship between composer Franklin Shepard and his two longtime friends — writer Mary and lyricist & playwright Charley.

A boundary-pushing classic that was often called ahead of its time, the musical features a number of of Stephen Sondheim’s most beloved songs.

See it if Great production with wonderful performers, music and story. A pleasure. Intimate and engrossing. A must see.

Don't see it if You are not a fan of Sondheim's or off-broadway productions.

See it if You want to see a top tier production of Merrily w/ a great cast. Very entertaining.

Don't see it if Even if you dislike merrily you may enjoy this production. I had previously seen another production and didn’t care for it but liked this!

See it if The 3 leads are wonderful together & help make more sense out of the play than I've seen in the past. Wonderful Sondheim songs.

Don't see it if Still, it's a great but messy play. Best to see it if you know the story ahead of time. What changes might be made before Read more

See it if you have 2 brain cells to rub together.This is Sondheim!The show is a gem.Casting is terrific.I love this score.Do not miss it.

Don't see it if you think Phantom is the epitome of musical theatre.This is clever,funny, and touching.Sooooo glad it is transferring.Can't wait for album.

See it if love Sondheim. love to see a troubled-show done well. great singing and acting. great use of the space and full cast doubling roles.

Don't see it if want a big epic show. NOT a fan of Sondheim. know the show and want a revision - this is just tightened, not rethought.

See it if Are a fan of Sondheim, Groff, Mendez, or Radcliffe. Want to see a production of this troubled show THAT WORKS!

Don't see it if You don't like Sondheim or musicals. Read more

See it if you can.

Don't see it if you aren’t interested and know someone who would love to. Read more

See it if Sondheim’s failed masterpiece.

Don't see it if No reason not to … sold out. I may be of the minority, but I actually preferred many aspects of the Fiasco production.

"Maria Friedman’s staging brings the intelligence of the songs fully alive...It’s therefore no small thing to say that in her effort to drag a half-living thing like 'Merrily' to full life, Friedman is more than halfway there. Maybe, finally, it’s a hit."
Read more

"Friedman’s production meets the audience halfway, and a Broadway audience today just might be able to make up the difference as it couldn’t in 1981. Cross your fingers: It might finally be 'Merrily’s' time."
Read more

"Among Sondheim musicals, 'Merrily' feels especially precious now because it invites the possibility of some personal glimpse at the songwriter himself."
Read more

"There’s much to be grateful for here, not least a genuine feeling for the material that plumbs the emotional depths without wading into cheap sentiment...it’s good to have the show back in what appears to be viable form to rewrite its Broadway history."
Read more

"With a superlative cast in the three central roles - the show casts a quietly intoxicating spell, as we watch their lives reel backward, from middle age and its clouds of disillusion to the heedless hopefulness of young adulthood."
Read more

"Thanks to superlative casting and canny direction, this elegant, emotionally searching production may be the finest 'Merrily' you’ll ever see."
Read more

"With this production, the dream of a great 'Merrily' has been caught."
Read more

"This show’s cast has made the run at New York Theatre Workshop a sold-out event."
Read more