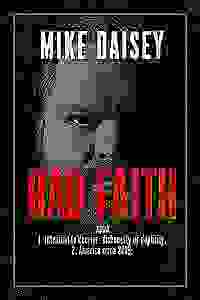 From the President and our politics to climate and corporate rule, Daisey unpacks how bad faith — a twisted kind of deception — spreads, why people choose bad faith over goodwill, and how this growing epidemic impacts our lives. Using heartbreaking and darkly hilarious stories from his own life, Daisey wrestles with the big questions: how do we know we're not part of the problem and how do we make sure the worst people don't come out on top?

Bad Faith will be produced by Audible Theater and recorded live at the Minetta Lane Theatre for Audible listeners globally.

See it if you're ok w/2 hrs of rambling. MD is intellig/engaging, but he's defensive abt his "scandal." He lacked integrity, so it's hard to trust him

Don't see it if you want coherence. His points abt bad faith get muddied. But he is funny/ clever. Needs serious editing, shaping. Disappointing.

See it if You want to see Mike Daisey sit at a desk and do his podcast. Some interesting bits lost in a rambling stream of consciousness.

Don't see it if You desire any action AT ALL or even a coherent plot. He doesn’t really even tie it all together with the loose thread the title suggests.

See it if If you like long monologues about where we are now in life. The star is articulate and intelligent.

Don't see it if No intermission kinda long and drawn out at times. If you prefer a more traditional play.

See it if Engaging storytelling but also a bit scattered. At 2 hours, was 30-40 min. too long covering too much. Also... polyamory never works out.

Don't see it if You don’t like monologues performances.

See it if you want to be a part of Daisey's therapy session, wherein he rambles & meanders thru personal stories as he tries to rehab his reputation.

Don't see it if u expect something coherent, cogent & original from a generally insightful & articulate monologist; ur a Trumpist (or u have Trump fatigue).

Also There's quite a bit that I can say about this poorly constructed, disjointed, long-winded, platitudinous, self-indulgent monologue, but I think it suffices to say that this was just a tough slog to sit through (despite occasional moments of wisdom & a few genuine laughs). Even his attacks on Trump & McConnell were rather trite & hackneyed. I suspect Bad Faith will be heavily edited for Audible, as I cannot imagine this will hold many people's attention when they have access to pause, skip & delete buttons on their apps. This was not Mike Daisey's best outing...... Read more Read less

See it if Daisey's most personally honest; thus powerful show to date Finally located the nexus of political & personal via the realm of bad faith

Don't see it if Monologue is dense, lengthy & overwrought (Daisey trademarks) requiring rigorous attention for payoff A meditation on our irreligious time

See it if you enjoy extended monologs pushing personal experiences into generalities. Mike Daisey is a good speaker who clearly enjoys telling stories

Don't see it if You are expecting historic or economic revelations. This time he stays with his personal experiences stemming from a recent divorce.

See it if Monologuist spills tea on Self:Esophageal,polyamoury,divorce,insulin,gaslite & psyche ward stint."It's always midnite in the middle of day."

Also "When we remember, we'll connect the stars that create the constellations/Monogamy is bad polyamoury/The Overton window has shifted"... Read more Read less

See it if You enjoy monologues and want to get a glimpse into a man's life. He's intelligent, well spoken and relevant. Occasionally funny.

Don't see it if You want to be constantly entertained. While there are great moments, it is also long and at times rambling. And there is no intermission.

See it if you are a Mike Daisey fan this is for you. An examination of life in transition, a raw emotional journey.Bravo for such a personal monologue

Don't see it if If you prefer light dramas or musicals .

See it if you are a fan of Mike Daisey and the stories he brings to the stage.

Don't see it if a play where I guy sits in one spot for an hour and a half and tells you one of the most interesting stories you have ever heard. Shame on U

Also Mike Daisey presents us with the eternal question: How do we know we're not part of the problem and How do we make sure the worst people don't come out on top? In this 90 minute play, he attempt to lay out evidence , specifically from his own life that illuminate the questions and leaves each of the audience members to look at their lives for the answers. It is one of the most interesting evenings I have spent in the theater in a long time. I am a fan of Mr. Daisey's works having attended numerous of this famed monologist productions. He is a master story teller and if you are lucky to have experienced one of his shows, you are all the better for having had the experience.... Read more Read less

See it if you're into well-performed monologues by a seasoned story-teller with a left-aisle bent; can "connect the dots" re:seemingly unrelated topic

Also Mike covers gaslighting, divorce, mental illness, politics & other sources of pain unavoidable our lives today. While the monologue is long and seemingly disconnected, a thinking audience will see the links. It is all about how we COMMUNICATE in this world where "everyone is transmitting and no one is receiving." Pretty damn observant.... Read more Read less

See it if you are a fan of this particular monologuist. I had never heard of him. Blends personal & political commentary fairly well, woven together.

Don't see it if you have no tolerance for profanity, if you are a Trump fan, or if you are not patient. It takes a while to get woven together. Was just OK.

See it if you want to hear a 110 minute monologue by a man sitting in a chair and in front a desk.

Don't see it if you want to see a production with many characters and scenes that add up to something.

See it if you like monologues, you enjoy the relationship between the personal and the political

Don't see it if you don't like one-man shows, you believe politicians' rhetoric

Also I never even heard of Mike Daisey or his scandal. I just took a chance and enjoyed the show. Yes, it was somewhat scattered with a few unresolved threads but it was funny and thought-provoking.... Read more Read less

See it if you like Daisey's monologues. This one is not one of his best...lots of rambling and all over the place. Not focused and too long.

Don't see it if You don't like one person monologues.

See it if You're a Daisey fan; his persona, as well as his life, has shifted since last heard from; though the effects on his writing are mixed

Don't see it if Impatient with works in progress; note this is a "phone free" event (something that should be disclosed in advance): Yondr pouches required

Also Daisey's life, as well has his convention-skewing persona, has undergone some major shifts, some of which he shares in this shaggy-dog confessional monologue. He updates us on his divorce, health issues, the fallout from his infamous fictionalizations in The Agony & Ecstasy of Steve Jobs. And of course the pathology of our national avatar of bad faith: the Orange Menace.
This is a work-in-progess, though Audible will be taping it for download at the Minetta Lane. We are guinea pigs here, and no doubt, much will be tweaked in the editing room. The experience is frustrating, as the desultory text ebbs & flows and has at least two endings, with the ultimate conclusion not terribly convincing.
Another aspect of the tenuousness of the relationship between monologuist & audience is that some of Daisey's certitudes have been eroded by his recent life experiences. His old stage persona--conspiratorially raising an eyebrow at absurdities--has yet to reinvent itself anew.

See it if you want to hear his confessional about his years-old scandal.

Don't see it if you want to see one of his typical, interesting, observant monologues

See it if A two hour show of a seated man speaking can keep your attention. He validly brings to our attention how much we enter into this contract.

Don't see it if You need more than one person stating their views on our currant state of affairs, or r right wing. Needs editing. Touching when personal~

See it if You love Mike Daisey's work. This is among my favorite of his monologues and I do not understand the negative feedback. I was rocked by this

Don't see it if You do not like smart, engaging, thoughtful, intellectually stimulating theater.

Also Mike is one of my favorite theater artists - if not my favorite. I put "Bad Faith" up there with "The Last Cargo Cult," "American Utopias" and "The End of Journalism" as one of the best nights that I have ever spent in a theater.... Read more Read less

See it if you enjoy a monologist without much to say

Don't see it if you want to be entertained

See it if Disappointing One Man Show trying to cover too many topics. With a little polish and cohesion this would be a much better production.

Don't see it if You are not a fan of solo monologues. Run time was an hour and 40 minutes without an intermission

See it if You want to sit through a two hours monologue with some clever ideas but also some overindulging moments about his “ scandal “.

Don't see it if If monologues are not your thing and you are a Trump supporter. This is definitely not the show for you.

See it if you want to see a gifted monologuist and insightful observer of society utterly clueless about his own life. Some very good moments, but ...

Don't see it if meandering. He tried to make a point when you can see he is just in a very bad place right now -- and trying to convince himself otherwise.

TheatreLover311
New York City
Female
104 reviews
Get Alerts Alerts On Alerts Off
65
Interesting, Too jumbled / rough flow from one topic to another, Too many f-bombs, It lacked polish
December 9th, 2019

See it if You want to hear what Mr. Daisey has to say as he makes some good points and offers some insights/warnings into too many topics to mention.

Don't see it if You feel there are way too many people already expressing unwanted opinions in the social media labyrinth of pundits and monologuists.

Also Hmmm...where do I begin? I expected a much more polished and well organized performance given that he does this professionally. Mr. Daisey took us on a whirlwind tour of his life and touched upon the consequences to the scandal that changed his trajectory ever since. It felt like this new tour was his desperate attempt at redemption. But all the topics he touched upon felt haphazardly mentioned and then abandoned for all the other ones he needed to squeeze in before the performance's end.

He started with mental health issues, drifted to Trump, polyamory, marriage and divorce, abusive relationships, more politics, a detailed explanation of the scandal involving the largest fruit in the global tech basket, bad faith, esophageal cancer, loving and caring for oneself, and, almost running out the clock, he threw in good will to combat society's bad faith approach. All delivered with a flurry of flying f-bombs that somewhat took away from the many points he was desperately trying to make.

“Mike Daisey - Bad Faith” hasn't been reviewed by any Critics (yet!) 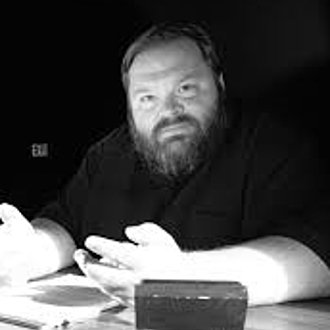 Mike Daisey
Writer / Performer
Get Alerts Alerts On Alerts Off