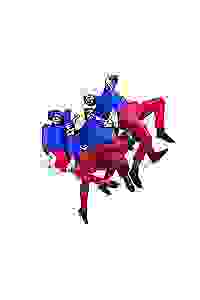 Mil Grus is an LA based ensemble that has developed an original style of improvisational physical satire.

his visual, visceral show is unique every time depending on who shows up and shares space with these five cosmic beings. Blending Bouffon, sacred clowning, spectacle, and physical theater Mil Grus acts as a mirror to society and forces us to laugh at our own fears and weaknesses. Formed in 2018 under the direction of Dean Evans, Mil Grus began to perform all over Los Angeles in comedy shows, variety shows, as well as performance art happenings. They developed their signature style in front of live and often playfully brutal audiences. It’s hard to say for sure what will happen at a Mil Grus show, but it will be surprising and satisfying.

See it if A show that has no rhyme or reason to it. Slow no real plot and cofusing.

Don't see it if confusing. Nees major reworking to it. Not good at all. Confusing.

70
Dizzying, Quirky, Out of the box, Interesting, Entertaining

See it if You want a very different experience, and willing of some from of participate.

Don't see it if If you are looking for a story. Read more

See it if You want a deeply odd, yet fascinating movement based improv team. You don't mind audience interaction: nowhere in the theatre is safe!

Don't see it if You need linear plot, characters, arc, and consistent performance regardless of audience involvement, or dislike improv or breaking 4th wall Read more

See it if Think Commedia Dell'Arte meets Blue Man Group. Slow until you get its rhythm, then funny and charming. A lot of audience interaction.

Don't see it if Meandering, aimless, maybe pointless fun is not your thing. Be prepared to participate at least a little.

See it if you appreciate an expert clown show. Not Ringling Bros style, but the Bouffon style. Outrageous, lots of audience interaction, and FUN!

Don't see it if you want to see a play. This is not a play.

See it if You like edgy improvisation with no particular direction.

Don't see it if You're expecting real clowning, topical material, to be uplifted or to laugh a lot. Read more

See it if you like absurdist, incomprehensible improv and don't mind watching one of the actors attempt suicide on stage.

Don't see it if you don't like what I said above. If you want a comedy that makes you laugh, not cringe.