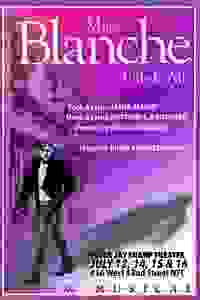 Miss Blanche Tells It All (NYMF) NYC Reviews and Tickets

Part of the New York Musical Festival: Inspired by the imagination of Tennessee Williams, this intimate and seductive show takes us on one man’s journey of desire, self-expression, and liberation.

1969 New Orleans: it’s standing room only. The band starts the opening number for Miss Blanche, the hottest act in the Quarter–but Miss Blanche is missing in action. Instead, a fiery young man takes the stage. Relaying tales from his brutal childhood, he reveals a mysterious trunk, filled with clues about his past and the key to his future. An official selection of the 2017 New York Musical Festival.

See it if As Miss Blanche, Brian Charles Rooney gets a "part & a 1/2" & takes it to the moon With a sensational voice & ferocious acting he's the show

Don't see it if Unfortunately, the book's beginning is banal & songs are uninspired Drama does pick up as we uncover who 'Miss Blanche' really is & why

See it if you like Brian Charles Rooney & a solo show performed by an actor with extraordinary vocal range, or have an interest in 1960s LGBT history

Don't see it if you expect a happy story with a warm, fuzzy ending or aren't interested in drag or New Orleans LGBT life. Read more

See it if you want to see a great performer reveal his impressive acting and singing chops in a one act "cabaret" that is sincere and personal.

Don't see it if if a guy in drag doing all the clichéd "Blanche DuBois" and other Williams' ladies routines is not to your liking. Show dragged (literally).

Don't see it if you don't like one-man/woman shows, LGBT themes, or if you're looking to see a fluff play. Read more

See it if While I don't agree with the other reviewer on the show as a whole, we certainly agree that Brian Charles Rooney is a STAR!

Don't see it if You don't enjoy one-man shows or you are uncomfortable with LGBTQ topics. Read more

See it if you want to see a powerhouse of a performance--Brian Charles Rooney is sensational. Truly a one of a kind.

Don't see it if A terrific performer can't sustain your interest in a muddy and cliche book that riffs on A Streetcar Named Desire. Read more

See it if you just love a one person show with tears, love, joy... it's worth every penny.

Don't see it if you not open minded.

See it if You want to see a great performance by a very talented actor.

Don't see it if You want an engaging story. There are a few nice moments, and a few good songs, but most of the music is derivative. Read more

"Ambitious, but not necessarily successful. Pritchard’s art songs tend to meld into one another and could use a bit more va-va-voom, and the switches in point of view from Lee to Blanche and back again are often unclear...'Miss Blanche' works best as a vehicle for Rooney...He is particularly comfortable portraying bittersweet sexual ambiguity and androgyny, and his vocal agility is the show’s greatest asset."
Read more

"Among the top shows at this year's NYMF. Jason Jacobs and Matthew C. Pritchard's musical, bursting with memorable numbers magnificently performed by Brian Charles Rooney, blends the confessional format of 'Hedwig and the Angry Inch' with the breathy nostalgia of Tennessee Williams in a moving and highly satisfying work...The music itself shows sophistication and a deep sensitivity to this cabaret style of storytelling."
Read more

"A nuanced story and a tour-de-force performance...The conceit is a drag show, but really, it’s a solo show. And a remarkable one at that...Lee/Blanche reveals his inner self while transforming from a man...into a totally believable woman...It was a literally jaw-dropping performance by the mega-talented Rooney...Kudos also to Jacobs and Pritchard for writing a piece that both looks back but resonates today, and has layers of interest and meaning to keep us interested and focused."
Read more

"The scenes are often heartbreaking and deeply engaging...The story is so well crafted by Jason Jacobs and the storytelling by Brian Charles Rooney is so pristine that to give much detail would require a spoiler alert. Mr. Rooney unpeels the layers of Mr. Jacobs’s book with the precision of a skilled surgeon...Under Gisela Cardenas’s stunning direction, Brian Charles Rooney delivers a bravura performance...A fine-tuned, superbly crafted piece of theatre"
Read more

"An intelligent and timely piece...What makes this so interesting is it is a cross between a cabaret, drag queen performance and a solo show. It blends all the elements together to create a piece that is completely captivating. Brian Charles Rooney is mesmerizing and so talented...Jason Jacobs' book is heartbreaking and touching...The band is hot, the actor is superb and sadly this show needs a longer run."
Read more