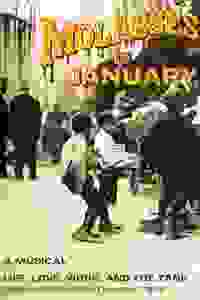 A new musical about a struggling family of Italian immigrants who are literally swept up in the Boston Molasses disaster of 1919 makes its Off Broadway premiere.

Spanning 1915 to 1919, set against the backdrop of Boston’s Italian North End, 'Molasses in January' tells the story of Anna. She's a single mother doing her best to raise her children in a world caught up in the turmoil of the first World War. An enormous molasses tank is built to make liquor and gun-powder for the war. But on an unusually warm January day, the tank suddenly bursts and two million gallons of molasses come crashing down around Anna and her family discovers that life can change in a moment.

See it if you enjoy shows based on historical events or appreciate musicals w/ a local theatre feel that are made by artists with a love of the craft.

Don't see it if you prefer large-scale, splashy productions. This is small and intimate.

69
For what it is it does well. skimpy production holds it back.

See it if You appreciate low level production of a new musical. Almost like a workshop level.

Don't see it if You want a finished professional musical.

"The lyrics tend to be very thin and extremely repetitious. The uncredited set is actually that of another show with unnecessary portions covered over in brown cloth, giving the look of the show no atmosphere whatever. The uncredited costumes are mainly coordinated in bland brown and white which does not help set period one bit. Stone's choreography is extremely basic and not very decorative. If you sit on the left side of the theater, you are likely to be blinded periodically."
Read more

“While disaster tales can often be rich fodder for the stage, Pellegrino’s dramatization is nearly unwatchable. Pellegrino presents us with little more than a cookie-cutter, stereotypical Italian Immigrant family...Were this show a parody, it could have worked. The fact that it is played as a legitimate drama makes for an awkward and painful 90 minutes. The mixed caliber of talent makes the best of this burden...There have been finer junior high school productions mounted.”
Read more

"An amateurish new musical…Pellegrino, rather than getting into the weeds about the actual disaster and its consequences, chooses instead to tell a banal, clichéd, pre-spill, laugh-an-hour story about a stereotypical Italian-American family…You'll probably want to know more about this catastrophe, which is far more interesting than the show...A good show lies stuck somewhere in the story, struggling to get out, but 'Molasses in January' isn't it."
Read more

"At best this production can be described as amateurish...The 19 songs, if you can call them that, neither enhance the story or move the action forward...The songs also have no structure and sound like snippets of ditties, if they could have formed a coherent tune...The cast was like watching badly performed community theatre, with not a lot of talent. The vocals for the most part were thin, nasal and sounded out of tune...There is not a thing I can recommend about this production."
Read more