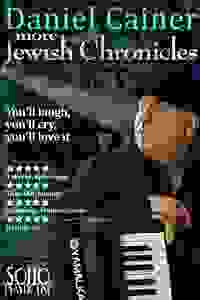 Daniel Cainer performs a riveting solo musical show about his upbringing and his heritage.

For those who have struggled with thoughts of where they've come from, and how they fit in, Daniel Cainer's solo show provides a musical reprieve and maybe even a catharsis or two.

Written and Performed by Daniel Cainer, whose previous show 'Jewish Chronicles’ received an overall member score of 83% on show-score. You can read the reviews here!

See it if This show is middling all the way. Average music, acting and story line.

Don't see it if If you want a bigger production.

See it if you relate to the importance of ancestors in shaping who we are, here told with songs that are both touching and full of humor. Cozy music.

Don't see it if you do not like one-person shows based largely on the performers own experiences.

See it if My 25 year old daughter and I had a great time. We laughed, participated in the songs, and were touched by the many tender moments.

Don't see it if You won’t relate to the Jewish stuff, or enjoy a solo act in an intimate space… a basement bar area with small tables and chairs.

See it if Daniel is a wonderful & engaging story teller. You will learn about history, family drama & more!

Don't see it if If you don’t like a one-man show, then skip it.

See it if you like intimate theater and personnel stories with cultural insight.

Don't see it if you expect a polished, elaborate show with costumes. Read more

See it if Catchy tunes and clever lyrics from a very likable performer.

Don't see it if The stories are all told through song. The first two are poignant, even a bit depressing, but hang in there, the rest are quite funny.

See it if You love nostalgia, Judaism and touching songs.

Don't see it if You hate touching nostalgia.

See it if Funny and touching stories backing funny & touching songs. Something here for everyone, Jewish or not.

Don't see it if It's a cabaret, not a play. The songs are all good, but some of them are longer than they need to be.