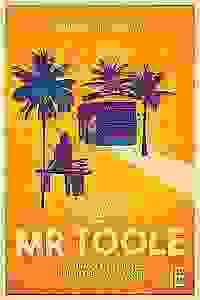 Before he was an author, John Kennedy Toole was a teacher. That’s how Lisette, one of his students at an all-girl’s college in New Orleans, knew him and loved him.

Through her eyes, amid the music, magic, and mystery of The Big Easy we, too, learn to love “Mr. Toole.” The teacher a student will never forget becomes a legend the world will always remember.

See it if you are interested in Mr Toole and his history, (though too drawn out).

Don't see it if you can't tolerate poorly done southern accents, excessive loud nagging and shrieking by the mother, vague hints of other issues.

Also With a bit of rewrite and editing, this could eventually be a good show. I felt the space in Theater C was a bit cramped for this production, but they did a good job with the backgrounds in the space they had.... Read more Read less

Rena Plays
New York City
50-64 | Female
271 reviews
Get Alerts Alerts On Alerts Off
76
Literary, Clever staging on what must be no budget, Sag in the middle, Southern emotion, Great acting
March 8th, 2020

See it if you are a fan of Confederacy of Dunces, interested in overbearing mothers, or have sympathy for the pain of rejection on the creative spirit

Don't see it if you have little patience for low-budget productions or a script that could probably benefit from an edit or two.

Also Lovely acting in the Tennessee Williams vein; if you are a fan of the novel, you'll probably be interested in this back story. Still solid acting is the reason to see this one.... Read more Read less

See it if Want clearly professional actors doing their best with the play.

Don't see it if You don't want a story that is unfortunately not engaging and very slow.

See it if Great acting and portrayal of repression, grief and mother's love. Interesting story well-told. Shades of Tennessee Williams.

Don't see it if You are triggered by suicide. Expect a full out theatrical production. Are frustrated with small spaces.

24 reviews
Get Alerts Alerts On Alerts Off
77
A worthy exploration
March 8th, 2020

See it if You are a fan of John Kennedy Toole or A Confederacy of Dunces. You enjoy developmental theater cleverly executed on a shoestring.

Don't see it if You are looking for big production values or a breezy theater experience. This offers neither.

Also Each of the actors was quite special in their own way. Spahn in a total departure from his marvelous Chekhov character at MCC is proving his range and skill as an actor. Purl , though histrionic at times in a Tennessee William's way, was very moving. Schnetzer as Toole Senior was quietly affecting and very real. The smaller roles were also well played although the "plot device" of the student admirer felt forced. The performance overall was interesting and enjoyable though maybe not quite there yet. Who is this aimed to please? We are Toole fans but many at our performance seemed to be unfamiliar with him and his work and one theater employee spoke of the "surprise ending" as we exited suggesting that the play was targeted toward the uninitiated.
Lastly, a special shout out to the video projections of New Orleans. 59E59 continues to excel at presenting theater with both imagination and economy.
... Read more Read less

See it if While it's not perfect, the writer has created a wonderful world for the actors to perform in. And the actors deliver. All of them.

Don't see it if You expect a perfect show, as this one is clearly in development. It's quite moving.

See it if curious about J. K. Toole's life and how Confederacy of Dunces became a classic after his death, enjoy mother-son stories, bio-dramas

Don't see it if not a fan of Toole or his masterwork, don't enjoy slightly staged works using same set for multiple locations or unnecessary flashbacks

Also This has the potential to be a much stronger play although the cramped staging at 59E59th Street prevents a grander scope from being achieved, the actors are excellent especially Spahn and Purl, who is directed to histronics from time to time.The mystery of Toole's death is somewhat resolved although there remain some questions about that and also Toole's lifestyle which is only peripherally hinted at, there is too much repetition with some scenes between Toole and one of his students repeated in various configurations and it takes too long for his mother to decide to send his manuscript to a noted writer. It did spur me to want ot learn more about Toole's life and his relationship with his mother.... Read more Read less

See it if You want to know a little bit about John Kennedy Toole. A lot about mother blaming.

Don't see it if you are not a fan of histrionic acting. irritating characters irritatingly portrayed. why 2 hours when so little is said.

Also This is all atmosphere and faulty concepts of the south. This is the 1990's not 1940's.
And I'm sorry, this was just bad theater. My friend liked it more than I. I quite hated this stereotypic, one dimensional view of this mans life. A thrown away scene about Toole's sexuality added nothing, nor did an elliptical version of dementia.

The only thing that resonated for me was when the mother declares her son was 'murdered by Robert Gottlieb'; an indictment against an omnipotent editor ruthlessly eviscerating Toole's work.

It would be interesting to know which version of Confederacy of Dunces went on to win the Pulitzer.

See it if You’d like 2 hrs on John Kennedy Toole & his struggle to write & get recognition, a battle taken on by his mother after his death. Strong.

Don't see it if You dislike a biographic, Toole, or Confederacy of Dunces or dislike long plays.

Also A delightful show, on a sad subject, the suicide of discouraged writer John Kennedy Toole, who at least according to this rendition was enthralled by TS Eliot’s J Alfred Prufrock, “in the shadows of his half-life.”

Recommended for anyone with literary interests.

See it if Like good acting and Confederacy of Dunces.

Don't see it if Expect a finished product.