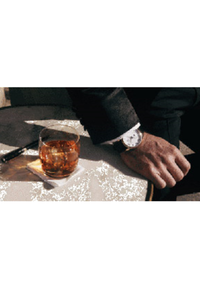 Joseph Menino stars in this U.S. premiere by playwright Joseph Vitale. 'Murrow' covers the high points of the journalist's career, including his early years at Columbia Broadcasting Systems, onsite reports of the 1940s bombing of London, the liberation of Buchenwald, and the on-air collapse of Senator Joe McCarthy’s 'Red Scare' campaign. More than just a biographical look at an icon and pioneer of American broadcast journalism, 'Murrow' is a stinging indictment of the contemporary corporate-media complex.

See it if Though not a pitch-perfect embodiment of Murrow's distinctive personality, his prophetic words are more haunting than ever in Trump World

Don't see it if You don't want a frightening history lesson or a one-man play often based on known quotations.

See it if You can watch an actor fully immerse into a role. Joe Menino is a powerhouse in this piece which explore issues of privacy and consumption.

Don't see it if You hate one-man shows.

See it if You love history or are concerned about the direction of today's news media.

See it if I thought it was galvanizing

“Murrow, the man, furnishes the frame for Murrow, the reporter. Both are magnificently brought to life via a superb collaboration between playwright Joseph Vitale, performer Joseph J. Menino and director Jeremy Williams...Merino’s Murrow is the class act that the original deserved. His resemblance to Morrow was impressive and I was utterly enthralled by his performance. It never felt like a one-man show...To follow Vitale’s ‘Murrow’ through recent history is a privilege.”
Read more

"Vitale succeeds in giving a fairly in-depth overview of Murrow's life and career. Whether he succeeds in drawing any overarching conclusion about the larger significance of Murrow’s career is debatable…Vitale isn’t quite able to unite the play’s two halves under a single thematic umbrella. But any biography-based drama is going to be somewhat episodic in nature...He doesn’t try to jam the material to fit a single thesis about the man, his era, or his profession."
Read more

“A fascinating look at one of last century’s most exceptional journalists...Director Williams shepherds Menino through the solo performance, together wisely crafting a Murrow out of history and authenticity, but Menino’s performance is not an impersonation...The effect is engrossing...The play is beautifully written and kudos go to Menino for his portrayal of Murrow and to Williams for recreating the historical elements. It is a must-see.”
Read more

“The script by Joseph Vitale stars Joseph Menino, who has the look of the eminent broadcaster….Although the play would benefit from more insight into Murrow’s personality, for those who admire the man and his work, ‘Murrow’ is a good start. Given today’s backdrop of political correctness, 'Murrow' reminds us of a time when broadcasters spoke their mind—and were willing to accept the consequences.”
Read more

"Vitale’s research and Menino’s performance are very good; at times, amazing. However the production as a whole falls short. The attempt to produce a piece on Murrow’s whole life, a true biography, doesn’t serve him well...It’s worth seeing the show for Menino’s performance, for the essence he captures. The core of this production is an amazing experience, but it needs to get out of its own way."
Read more