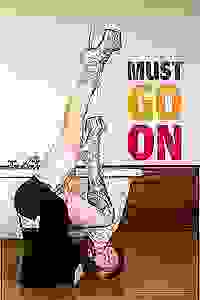 In this solo show, Patrick is a wild, off-duty drag queen who thrills with literally 100 costume changes in exactly 60 minutes.  More…

Expect velcro, laughter, tears, sparkly-silver 6 inch-tall ankle-boots and a little bit of fake blood as he fights to survive an obstacle course of his own manic invention, navigating a bathtub full of kale, way too much glitter, and one epic, emotional meltdown.

See it if See a drag queen's wild, hectic costume changes in a slapstick mode that is clever & exhausting, bizarre behavior with no story but heart

Don't see it if Garish, colorful outfits put on and off at breakneck speed is off-putting, want a story & dialogue, can't deal with hectic pace, loud music

See it if U R into bizarre performance art that accumulates detritus of 100 costume changes in 60 minutes, exhausting 4 both performer & audience

Don't see it if U require text & storyline, becomes an exercise in disposal with manic movement & satiric commentary on contemporary music & there's blood

See it if You want to see a guy run around the stage for over an hour changing into various costumes while music blares.

Don't see it if You enjoy self-indulgent, obnoxious tedium.

Also This was the longest 80 minutes of my life (the show went into double overtime.) The concept is that this "performer" runs around a stage changing costume 100 times in 60 minutes, all drag related. When he put on the high heeled boots for the 5th time, I was fed up. No narrative flow, not even a real spectacle. Impressive if only you think about the effort they'll have to make after the show to stuff all these clothes back in order for the next performance. The performer had a few people in the audience who were obviously friends, because they were enjoying the repetitious tedious of the show. A woman next to me actually fell asleep, despite the kinetic music pumped up to a 10. My companion, who has worked in LBTQ+ theatre for over 40 years called it the most pointless thing she has ever seen. I wish I had that 80 minutes back; at least I could have used it to see the film version of "Cats" and been mildly entertained....... Read more Read less

"The promise: '100 costume changes in exactly 60 minutes.' I doubt it was 100 changes, although I didn't count, but it was more than 60 minutes (I did count that.) The costumes were, on the whole, so unremarkable as hardly to qualify as costumes …Can self-indulgence be art?"
read more
Get Alerts Alerts On Alerts Off