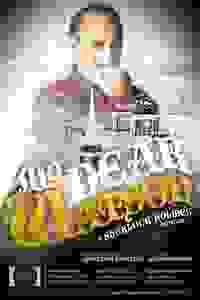 Part of the New York Musical Festival: Told from the perspective of Dr. Watson, this dramatic musical reanalyzes and redefines love and friendship for a man who is seemingly incapable of both. More…

Follow the legendary friendship of Sherlock Holmes and Dr. John Watson. Through the mystery, action, and cleverness woven throughout Sir Arthur Conan Doyle's stories, 'My Dear Watson' looks beyond the realm of narrative and into the heart of the man himself...that is, if he has one at all. Is there a man in the machine? An official selection of the 2017 New York Musical Festival.

Don't see it if you're expecting something intelligent, masterful, and clever; if it breaks your heart to see favorite literary figures reduced to flatness.

Also While My Dear Watson has its heart in the right place, and while the actors, playwright, musicians, and all involved clearly committed to this Sherlock Holmes musical, I left unimpressed. I felt like this was meant to be a "family friendly" staging--something to entice the 5-10-year-old audience to appreciate the classic Doyle stories. None of the wit, sagacity, charm, intrigue, and deductive and inductive brilliance of the stories is found here, although trace elements of potential intrigue exist. I found the songs the best part of the musical--although they were too short and too infrequent. With stronger recasting for more coherence and quality acting, as well as a continued reworking of the songs and set, this could be a really fun musical. I'd also like the friendship between Holmes and Watson teased-out more, as the musical clearly tries to make this the central relationship but fails to offer enough time and evidence for their friendship. The video-screen backdrop distracts.... Read more Read less

See it if you are a die-hard Holmesian who must experience everything possible concerning him. Children might benefit from this kind of introduction.

Don't see it if you want to experience Holmes on a higher level. The music is dirge-like when it's not sounding like chant. NYMF usually chooses better.

See it if You love anything Holmes and Watson, even though it is not a very good story and the acting and singing are poor.

Don't see it if You are not in the mood to see a community theater quality musical production of beloved fictional characters with bland songs & dialog.

See it if You want to experience anything and everything Holmes.

Don't see it if You hold recent tv adaptations of Sherlock as a yardstick.

Also As is, no reason to be a musical. Very flat performances and soporific music make for a lousy experience, especially in light of recent renditions of Holmes.... Read more Read less

See it if You want to see the most amateurish show NYMF has actually staged, are a big enough Sherlock fan to see anything and everything based on it

Don't see it if U dont want to suffer through a dull story, insipid lyrics, a Sherlock who can't sing surrounded by a cast speak-singing, can see other show

See it if you are a Sherlock Holmes fan interested in a small-scale musical of the detective.

Don't see it if you want a more creative, ambitious musical.

Don't see it if you don't want to leave embarrassed and ashamed. It's not a musical but a tasteless text declamation with occasional failed song attempts.

Also If a take on a timeless classic is attempted with so many good versions available, it better be solid otherwise it's just tasteless and painful.... Read more Read less

See it if Only if you absolutely love any and all stories dealing with Sherlock Holmes, don't mind an overall amateurishness, unimaginative lyrics.

Don't see it if You expect a taut script, good songs, dislike uneven acting (some better than others), prefer faster-paced imaginative shows w/o cliches.

See it if I went wanting to like it. But after I've seen Benedict Cumberbatch be Holmes, it's hard to accept an older actor without Benedict's spark.

Don't see it if The pace is plodding. The tech (projections and lighting) is better than the script. Overall it's not worth it.

See it if You like Sherlock Holmes then you will enjoy the play. It drags out in parts and is slow and disappointing.

Don't see it if You are not a fan of Sherlock Holmes.

GentleSpirit
The Bronx
35-49 | Female
60 reviews
Get Alerts Alerts On Alerts Off
62
Faithful to the short stories, Ambitious, Too broad
July 17th, 2017

See it if you love all things to do with Sherlock Holmes.

Don't see it if you are looking to the beauty in small moments and interactions.

Also This is a show that is clearly done with love, and includes a lot of big moments in Arthur Conan Doyle's stories. The problem is that they tried to cover too much--from Sherlock Holmes and John Watson meeting, to the famous "Worth a wound" moment, to The Final Problem and beyond. It would likely do better to either leap in, assuming we are already familiar with these two men, or else spend more time on the ways in which they initially learned to work together.

Additionally, there is a point where you begin to be TOO faithful to the source material. I've been to dramatic readings of some of the stories and enjoyed. This show uses many famous lines from various adventures, but it makes the speech clunky and unnatural.

That being said, I have high hopes for future versions of this show. We must remember that this is a NYMF show and provides a great chance for the creative team to see how audiences respond and rework aspects of the show.

See it if You love everything Sherlock Holmes.

Don't see it if You can do anything else. The music was slow and dull.

See it if you are a die-hard Sherlock Holmes fan. I enjoyed the actor playing Watson. Music is ok but lyrics need work. See it if you loved Jekyll & H

See it if You're a big Sherlock Holmes fan and you want an intelligent, profound take on the stories.

Don't see it if You're looking for an upbeat, big ensemble show.

Don't see it if You are a fan of good theater, and strong acting or inspired staging. None of that is present here.

Don't see it if You are not a fan of the Sherlock Holmes stories.

See it if You like solving mysteries and leave wanting more!

Don't see it if You don't like thinking about the performance after the show has ended.

See it if you're a fan of Holmes who is interested in seeing a true adaptation of the original stories, set to a beautiful musical score.

Don't see it if you are expecting a traditional, big-name musical with love interests and comedic subplots and intricate dance numbers.

Also The charm of this show rests in the fact that it doesn't bow to traditional gimmicks that tend to speak to mass audience appeal. It tells a story that is already familiar to most fans of anything Sherlock-related, underscored by Bartschi's beautiful music. It was clearly written with the utmost respect for the source material, and while the script could use a little tightening to keep it from dragging in certain spots, this can easily be the basis of an exciting stage adaptation unlike anything seen before. It is not without its humor, such as Sherlock's sharp wit at the expense of Lestrade's percieved buffoonery, and possesses more heart than one might come to expect from a story about "the man inside the machine." All in all, while it is certainly a work in progress, I am eager to see where it will progress after having had the opportunity to be performed on a NYC stage.... Read more Read less

See it if You love Sherlock stories, or if you have never been introduced to the series and want an entertaining glimpse into the heart of the stories

Also Video set was pretty cool and clever but at times distracting when the acting or sorry was slow. Though Sherlock did not have an amazingly stunning singing voice, I think it fit well with his character and made him more believable. It seems like the lack of instrumental support in the music makes it difficult in a few places for the performers to find the key/their starting notes. I like that it kept a lot of the source material, keeping the integrity of the stories.... Read more Read less

See it if The cast and crew are very talented, I was on the edge of my seat the entire time. Loved this show!

Don't see it if A must see

See it if You are a Holmes fan. The modern day "bromance" term is explored between Holmes & Watson. Projections give you the feel of time & place.

Don't see it if You're wanting a traditional musical. It's in NYMF's Presentation only category. Wish you could have seen the Orlando set design - great!

See it if You like Sherlock Holmes; You want to see a show with creative use of stage technology; You can see beyond imperfections to the core

Don't see it if You're expecting the next Next to Normal; You want a traditional musical; You like large-casts and/or large pits

Don't see it if you expect a huge shallow production

See it if You are a Sherlock Holmes fan. This show has light humor, mystery, and a study into an unusual friendship.

Don't see it if You want a danceable musical. The songs are catchy but lean more towards ballads and introspection.

See it if You enjoy the story of Sherlock Holmes (a la Benedict Cumberbatch).

Don't see it if You don't have a bit of imagination. The stage doesn't allow for much in the way of an actual set, but this is cleverly averted by video.