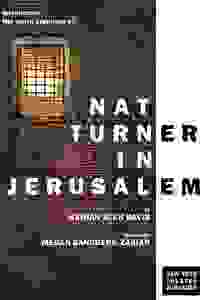 In August 1831, Nat Turner led a slave uprising that shook the conscience of the nation. Turner's startling account of his prophecy and the insurrection was recorded and published by attorney Thomas R. Gray. NYTW 2050 Fellow Nathan Alan Davis makes his New York debut with this timely play, which imagines Turner’s final night in a jail cell in Jerusalem, Virginia, as he is revisited by Gray and they reckon with what has passed and what the dawn will bring.

See it if /for captivating contest btw Turner as avenging angel vs. lawyer horrified at killing of innocents

Don't see it if /since asymmetrical contest/Turner more powerfully portrayed; play is inert/devoid of drama as neither party moves the other Read more

See it if you need a refresher course re: pre- Civil Was A two-hander worth seeing.

Don't see it if have trouble with small cushions for wooden bleacher type sets.. (only 90 minutes or so though)

See it if you want to see: exceptional acting by Phillip James Brannon; a window into one example why racial and ethnic suppression do not work.

Don't see it if historical stories do not interest you; you do not like talky plays with little action; you dread a story that you know will end in death.

See it if you like theatre that makes you think, that challenges your preconceptions. Acting was superb. Direction was marvelous. Well staged.

Don't see it if you want a light hearted romp!

Don't see it if The wooden seats have backs and cushions and are not uncomfortable. It must have cost a lot to reconfigure NYTW. The experience is worth it

See it if a well-modulated, emotional, believable performance is a goal. Mr. Brannon scores a 90. The play-would rather read-extraordinarily topical.

Don't see it if you are not able to sit quietly while two characters debate. if you have difficulty listening to violence retold. Read more

See it if you must

Don't see it if enjoy well written pieces about an historical event. It is faction .

"What suspense there is lies in waiting to see if Turner will respond to Gray’s plea and, more important, if the prisoner will in any way change the thinking of the other men. The answer to both turns out to be a qualified yes, and the ways in which Davis comes to these conclusions have a certain dialectic ingenuity. Mostly, though 'Nat Turner in Jerusalem' is a static work, as iconography tends to be. Sandberg-Zakian’s direction brings little kinetic energy or surprise to the proceedings."
Read more

"Davis’s way into the material is neither historical pageant nor postmodern abstraction; he and director Megan Sandberg-Zakian opt (almost quaintly) for poetic naturalism with theatrical flourishes...Such a stolid, talky approach puts the burden, unfortunately, on the acting. Brannon’s Turner has an unexpected sweetness that grows on you and makes his flashes of righteous rage all the more rattling. But Vickers, as Gray, is too callow to add nuance or depth to his scenes."
Read more

"Davis resists any singular reading, let alone an overtly political one. He prefers to let the tale remain as mysterious and open-ended as possible, and thus, in its way, more terrifying. Plays that try to walk that line usually trip, but Davis, who is 36 and whose work is largely new to New York, has smartly erected a sturdy scaffold around the material...The production, directed by Megan Sandberg-Zakian, has nerves of steel."
Read more

"Unfortunately, despite the incendiary nature of its subject matter, 'Nat Turner in Jerusalem' emerges as a tedious, lifeless affair...Brannon takes up some of the evening's slack with his fiercely commanding performance as Turner, but Vickers struggles in his two roles...'Nat Turner in Jerusalem' should have much more dramatic urgency than it does. Performed often in near-darkness, the sluggish play succeeds less in stirring emotions than lulling you to sleep."
Read more

"The most interesting part of the creative exercise is not the activity inside Turner's cell, but the breadth of its implications about our relationship with history as a whole — whether 200 years past or flooding your Twitter feeds as we speak...The dialogue employed is filled with lovely prose and discerning metaphors. Though with little in the way of plot to prop up the dense language, and characters who seem immovable, the story can occasionally amble through the long night."
Read more

"Davis' current effort contains any number of gripping passages, but stumbles while trying to find a dramatic framework...The production is aided enormously by the performance of Phillip James Brannon...He doesn't make a single false step...But if Davis' words sing, his handling of dramatic structure still needs work...Time and again, the play works up an atmosphere of tension, only to let it dissipate. It's a stop-and-start approach that keeps us from becoming fully engaged."
Read more

"All this makes 'Nat Turner in Jerusalem' an affair that's as staid as it is well meaning, and as dull and dreary as it is portentous. When historical facts preclude traditional suspense, they need to be replaced with something to substitute for it...Also a problem is Megan Sandberg-Zakian's oppressively conceptual staging which tries to impart motion and energy on the swiftly flowing waterway of progress, but looks alternately suffocating and silly."
Read more

"Davis’ play has an inventive but murky scenario that’s given an overwrought presentation and doesn’t ignite. It's only fitfully engrossing despite the efforts of those involved...Structured as a series of short scenes that are well written, the play cumulatively doesn’t hold interest...Brannon is compelling...Vickers is outstanding...If the production relied on this element it is possible that it would have been more satisfying. Instead there is a reliance on concepts and effects."
Read more