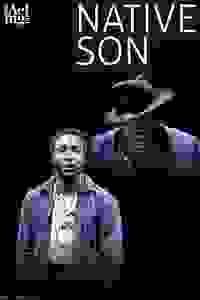 The Acting Company presents this adaptation of Richard Wright's classic novel about the struggles of a black man in 1930s Chicago. Performed in rotating repertory with "Measure for Measure."

In the South Side Chicago of the 1930s, Bigger Thomas struggles to create a place for himself in a world whose prejudice has left him with few opportunities. After taking a job in a wealthy white man's house, he unwittingly unleashes a series of events that violently and irrevocably seal his fate. Manifesting Bigger's double consciousness through the character of the Black Rat, Kelley reclaims Richard Wright's groundbreaking story for a twenty-first century audience.

See it if Really great performances and story. The first half of the show is really strong.

Don't see it if The second half felt a little repetitive

See it if Deep, dark bi-level psycho-drama. Desperate murderer/fugitive in racist Chicago is possessed by devil-ghost of his father. Artistic terror.

Don't see it if You won't like an artsy interpretation of a novel where a lot of action occurs in the protagonist's mind. 2nd half drags compared to 1st. Read more

See it if clever script which fluidly moves back/forth in time; see major talent in Kane in NY debut

Don't see it if tale of racial oppression/violence does not pack wallop of novel; does not sharply explore moral ambiguity of Bigger/victim & victimizer

See it if you want to see a very powerful play about race relations in the 30's. Some scenes are very disturbing as is much of the dialogue.

Don't see it if you do not like subjects such as racism, police brutality or rape. Read more

See it if Society blamed when a white heiress dies and a black chauffeur embarks on web of deceit. Inner/Outer Bigger always inhabits the stage.

Don't see it if Slurs. Because "NS" is in rep. with "M4M," there's an ominous staircase that might be beneficial to the other production. Read more

See it if you like shows about racial issues.Unfortunately, this heavy handed production does not have nuances or anything really thought provoking

Don't see it if you were looking for a nuanced look at race relations.Acting is mostly weak.Lead is excellent.Rest of the cast is college student level.

See it if Powerful and time proven book that New Yorkers get to see.

Don't see it if Disappointing set.

See it if beautifully realized version of this iconic novel. The staging and acting are flawless.

Don't see it if plays about discrimination offend you. There is no let up to the anguish that the blacks endure so don't look for fluff here.

"A Big Story Made Smaller: This fluid and nonlinear adaptation of Richard Wright’s novel is brisk, but its theatrics upstage its implications."
Read more

"Fighting the Power in 'Native Son' and 'Measure for Measure.' The Acting Company pairs Richard Wright and William Shakespeare to wake us up to injustice."
Read more

"Told in a fragmentary form often with flashbacks within flashbacks, it is only possible to put the chronology together if one knows the novel. Kelley has also eliminated the powerful speech to the jury by Bigger's lawyer which is one the most famous of all statements on social racism."
Read more

"You don't need the signposts to find harrowing contemporary relevance in the story of a black New Yorker, Bigger Thomas…Bigger is given seething, sorrowful life by Galen Ryan Kane…by mixing and matching the novel's timelines and interspersing scenes, Kelley draws out some provoking parallels."
Read more

"Astounding production of Native Son, in which playwright Nambi E. Kelley's adaptation of the characters, plot and devastating themes of the novel dispel any thought of Wright's complex excoriation of racism in America."
Read more

"Richard Wright and William Shakespeare are justly praised for their depth and breadth of thought; I wish that in the zeal to focus them on single concepts, these productions didn't reduce their works as much as they do."
Read more

"This bleak portrait of institutional and societal racism and its effects on an African-American 20-year-old man remains all-too-shockingly relevant today; indeed, you wouldn't be surprised to hear the story of Bigger Thomas on any nightly newscast."
Read more

“The action moves at a breathless pace as the play hurtles to its foregone conclusion. The production also benefits from exceptional performances. Native Son first appeared more than two decades before the advent of Civil Rights legislation. [T]he current adaptation demonstrates that the work is as relevant today as it was nearly 80 years ago.”
Read more