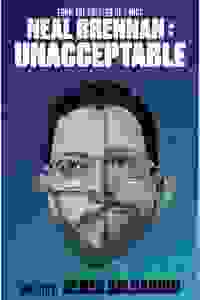 Unacceptable, a one-man show created by comedian Neal Brennan, takes audiences on a joke-laced journey that is equal parts self-reflection and self-deprecation. In it, Brennan ponders his own defects and the difficulty he has fitting in to a group. Sometimes, loneliness makes for the best comedy. Directed by magician Derek DelGuadio, this six-week limited engagement begins August 25 at New York's Cherry Lane Theatre.

See it if you’re a big fan of Neal Brennan’s work; you don’t mind navel gazing comedy from a privileged white guy

Don't see it if You’re looking for new takes on just about anything. Read more

See it if you're a can of standup comedy that is concerned with more than just getting laughs.

Don't see it if you're experiencing Covid symptoms. Read more

See it if you love comedy that makes you laugh and makes you reflect.

Don't see it if you want a massive theatrical performance or prefer crass humor.

See it if You enjoy storytelling and self deprecating humor.

Don't see it if You don’t like laughing. You don’t like great music played before the show starts. Especially deep cuts from the police. & talking head

See it if Want something cerebral while filled with laughs. Not much room for improvement. Funny, dark, intense, and unique

See it if You want a cerebral, no holds barred set of observational and deeply personal comedy. Neal is an original genius; this work reinforces that.

Don't see it if You’re squeamish, woke, or a rube.

See it if you like thoughtful, perceptive, smart humor on politics, race, relationships and mental health.

Don't see it if you prefer more conventional observational humor or comedians that don't get especially serious.

"Neal Brennan: Unacceptable is a highly unusual, thought-provoking and effective work that should be seen."
Read more

"You know one of the best parts about living under a rock? The best part is that you get to be continually surprised by things, people, places that other people take for granted. You get surprised over and over again while the rest of the informed world is saying, "Been there. Done that." Neal Brennan: Unacceptable is my most recent discovery."
Read more