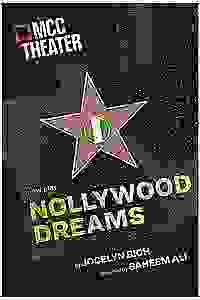 This raucous, Lagos-set comedy follows an ambitious young woman named Ayamma who gets a taste of her superstar dreams when she lands a major audition with Nigeria's hottest director. Success, however, comes with its own challenges as she comes head-to-head with Fayola, Nollywood's former starlet, and falls head-over-heels for Wale, Nollywood's current heartthrob. A highly-anticipated new comedy by Lucille Lortel-winner Jocelyn Bioh and directed by Bioh's frequent collaborator, Saheem Ali.

See it if Sharp, energetic farce about competitive show business people making a "B" movie in 1990's Nigeria. The TV hostess was hilarious.

Don't see it if You are looking for more substance.

See it if You like a cute little play about movies made in Africa.

Don't see it if You want a profound play with any depth.

See it if You enjoy the plays of Jacqueline Bioh. You are interested in the way other countries approach the business of movie making.

Don't see it if You can’t deal with heavy Indian dialect and won’t be able to follow the plot because the actors often speak very rapidly.

See it if you want a lighthearted show about the universality of folks dreaming about being in the movies.Set is fun.Acting is very good.

Don't see it if you are looking for something serious or touching or meaningful. This one is just for fun.

See it if you want to have an amazing time at the theater experiencing the differences and commonalities of another culture’s pop culture.

Don't see it if you hate fun, because that’s this from start to finish.

See it if For an evening's light entertainment, it was fun. The actors did a good job with a very fluffy script.

Don't see it if If you're looking for something deeper and don't care for fairy tales, this might not be for you.

See it if Light rom com of a younger woman trying to land a Nollywood film role.

See it if lighthearted fare, well-acted especially if know anything about nollywood.

"“Nollywood Dreams” is spirited and casual, with the knockabout rhythms and narrative shortcuts of Hollywood in its early years, before flickers became films...A play about the enjoyable makeshiftness of early Nollywood films therefore gets an enjoyably makeshift treatment: Form follows dysfunction. Ali’s direction emphasizes color and comfort over snap and discipline. (Dede Ayite’s costumes nail all four.)"
Read more

"Director Saheem Ali’s production is handsome and fluid, flowing seamlessly on Arnulfo Maldonado’s multi-faced scenic design. But it’s the deft and lively performances from the cast, and characteristically knockout costumes by Dede Ayite, that animate the story with irresistible vibrancy. If Bioh’s plot seems somehow both predictable and far-fetched, that appears to reflect the style of Nollywood movies, as evidenced by a hilarious coda that offers a taste of them here."
Read more

"Bioh’s dialogue is purposefully sitcom-ish and charming, whether it’s exaggerated or playing to emotions more subtle, and her language is seamless. Never allowing herself to be held down by the weighty, social-cultural constructs of class and money in Nigeria in the ’90s, Bioh’s fast-moving comic text is warm, wonky and laugh-out-loud funny. With that pace, cast and musicality, this version of Nollywood is, indeed, a dream."
Read more

"Bioh also provides the actors sturdy platforms in the characters she writes...The performers keep us laughing throughout, grounding their characters' eccentricities in real objectives and insecurities."
Read more

Bioh has enjoyed acclaim with the 2017 breakout hit School Girls; Or, the African Mean Girls Play, and last summer's Merry Wives at Shakespeare in the Park, but this effort is a bit weaker than its predecessors. Nollywood Dreams, which showcases some talented young people and an attention-getting production design, is certainly good for a few laughs. But it also passes in a flash, not leaving much of an impression.
Read more

"4 stars! This is to readily admit Nollywood Dreams is a generally lightweight confection that even includes a few weak spots along is merry path. But it’s also to acknowledge that, thank providence, lightweight comedies have an often-forgotten prominent place in literary circles."
Read more

"4 stars! You don’t have to be a fan of Nollywood movies, or even have a clue what Nollywood means, to thoroughly enjoy Jocelyn Bioh’s hilarious new comedy. Set in Lagos in the early 1990s, when the scrappy, low-budget Nigerian film industry was beginning its rise to becoming one of the largest in the world, Nollywood Dreams feels universal in its send-up of celebrity culture and show business dreams. While not quite as emotionally resonant as Bioh’s breakthrough work School Girls; or, the African Mean Girl Play, it delivers ample doses of the laughs and heart for which the playwright has quickly made a name for herself."
Read more

"A show about following your dream and what you can accomplish as your most authentic self, Nollywood Dreams (running at MCC Theater through November 28) is a charming and heart-warming comedy for everyone. Playwright Jocelyn Bioh (author of Merry Wives at the Public this summer and School Girls; Or, the African Mean Girls Play) and director Saheem Ali take us on a simultaneously campy and genuine journey with these relatable and larger-than-life personalities."
Read more