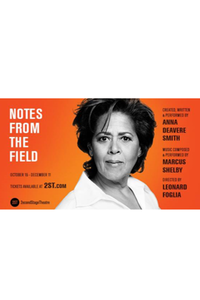 View in admin
Notes From the Field
NYC: Midtown W
89
Score it Scored!

Notes From the Field NYC Reviews and Tickets

'Notes from the Field' depicts the personal accounts of students, parents, teachers, and administrators caught in our country's school-to-prison pipeline. Investigating a justice system that pushes minors from poor communities out of the classroom and into incarceration, Smith's solo show shines a light on a lost generation of American youth. Drawn from interviews with more than 200 people living and working within a challenged system, Anna Deavere Smith continues her mastery of documentary solo performance by stimulating awareness and, ultimately, change.

See it if you are interested in racism, incarceration, and education. Problems and solutions are presented. ADS transforms into many characters.

Don't see it if you want a show with a plot. NFTF explores issues from different angles, but is not a traditional play. A few characters went on too long. Read more

Don't see it if You are not interested in watching Ms. Smith present a serious documentary in which she plays all the characters.

See it if you're a Smith fan & have admired her past works and talent to create multiple characters, enjoy relevant, hot topic theater

Don't see it if One person shows are not your thing, you're not interested in the issue of how blacks and minorities are treated by the justice system

Don't see it if Very downbeat despite respites of humor & optimism; a dulling sameness settles in notwithstanding Deaver Smith's brillance

Don't see it if you don't like being bludgeoned by Ms Smith's views,

See it if You're interested in topical works that tackle the issues of race and education, and/or have enjoyed Anna Deavere Smith's previous work.

Don't see it if You're not interested in listening to nonfiction interviews being acted out in a one-woman play, no matter how remarkable.

Don't see it if you're looking for escapist theatre. This show is grounded in harsh realism and pulls no punches. It's an important work of art.

See it if you're interested in raising awareness of our social justice system, ethnic minorities and the need for a more effective education system.

Don't see it if you don't want to see the dynamic ADS portray diverse characterizations of courage and great humanity during the worst of times. Read more

"Though her command of different voices is what’s most obviously dazzling in theatrical terms, that mimetic talent wouldn’t count for much if it didn’t make us share the intent focus she brings to her subjects...That’s what makes Ms. Smith so invaluable. She creates a dialogue out of monologues among souls who, in real life, might never have occasion to speak to one another...Ms. Smith draws us into an ever-mutating, ever-expanding discussion."
Read more

"In the audacious and mind-opening 'Notes from the Field,' Anna Deavere Smith delves into poverty, police brutality, mass incarceration and educational failure. Even as she shifts, with almost insouciant skill, among 17 characters of different sexes and races, she never disappears...Her probing intelligence and fair-mindedness retain a tangible presence, assembling the monologues like puzzle pieces to form a larger picture."
Read more

"Each segment — well, maybe one or two are less riveting than the others — is fairly astonishing, with apt climaxes and startling kickers. The overall argument, too, is theatrically structured, moving from abstractions to specifics and from causes to results to a form of transcendence...In a way, what she does is more like a summoning or a séance than a play. I’d even call it anti-theatrical, except that it’s unquestionably great theater."
Read more

"She portrays dozens of real-life figures with dazzling, chameleon-like versatility...There are many powerful moments in the show...Despite the performer's skills and the vital importance of the social issues discussed, 'Notes from the Field' proves too diffuse to have the intended impact. The piece never quite comes into dramatic focus, instead accumulating its horror stories to punishing rather than illuminating effect...The show ultimately becomes as numbing as it is provocative."
Read more

"Smith’s scope is greater than a look inside classrooms. Here she finds connections to a failed justice system, police violence and even to the civil rights movement of the ’60s. All this—and a bravura performance—make for a stunning production...The broader connections take time to build in strength—and sometimes the storytelling strays—but Smith lays out a compelling case for the bigger picture...The solo stories are staged with efficiency and grace by director Leonard Foglia."
Read more

"Despite some structural shagginess in the script, Smith keeps us riveted with her mystifyingly real performances...Smith masterfully weaves facts around personal narratives, giving the numbers a human face...While both of these passages succeed at ending the play on a hopeful note...It's only a feel-good ending if you haven't been paying attention for the previous two hours. Still, Smith undeniably convinces us that this is a discussion worth having."
Read more

"A theatrical treasure known for decades for her solo performances, Smith uses the familiarity of these scenes to offer an intimate look at America's school-to-prison pipeline that systematically directs its citizens of color to a life of poverty through substandard education and imbalanced treatment...While Smith's superb acting skills give each contrasting character an individual completeness, the strength of her art is that she never allows the performance to overwhelm the words."
Read more

"Smith has dived deep into her subject, traveling the country to assemble a gallery of people whose lives have been touched by this phenomenon and using her considerable editorial skills and gifts as an actress to create a kind of mural out of their points of view…As always, she is riveting…Everything about Foglia's production has been arranged to show off Smith and her incredible talent to maximum effect."
Read more