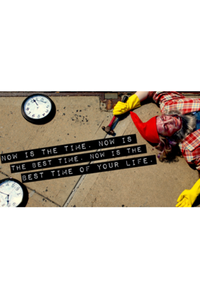 Little Lord and Abrons Arts Center present this epic and absurd treatise on trying to leave one’s mark on a world that never stands still. Inspired by 'Prometheus Bound,' 'The Book of Ecclesiastes,' 'Dirty Dancing,' and the writings of Washington Irving.

New York City, 1809: an older gentleman of questionable mental health goes missing. Now, over 200 years later, Diedrich Knickerbocker has reemerged in the Catskills, hiding out in the decayed ruins of a once legendary Borscht Belt resort. When his anxieties finally manifest themselves as terrifying garden gnomes, and his vengeful liver-eating bird-woman of a wife crashes through the ceiling, our modern/ancient hero is thrust from the mundane into the mythic.

See it if you enjoy quirky out of the ordinary theatre, controlled chaos,, great acting/staging

"This new production from the Little Lord company doesn’t traffic in narrative intelligibility. And yet the show has an odd, ramshackle charm. As in previous Little Lord pieces, various eras are thrown into a blender turned up to high. This time around, Little Lord drew inspiration from Washington Irving’s 'Rip Van Winkle,' Catskills history and that area’s resorts...It’s hard to make sense of it, but also hard to dislike."
Read more

"A fantastical pastiche culled from any number of obscure and less obscure sources...'Now Is The Time' conjures a world that must be experienced firsthand. And indeed, I doubt that any two people would see this play in the same way. The emotions of the play all straddle the line between ecstatic and tragic, and as a whole, the play points towards the universal, timeless fear of change...Director Michael Levinton evokes a tight, impressive, stellar group performance from his players."
Read more

"It deftly uses the frame of NYC history to open onto interweaving personal, urban, and cosmic histories; to touch on fragmentations and metamorphoses of the self; and to interrogate self, city, and art, even making such questions literal in one section and directed, seemingly, at the audience...An anarchic pastiche of voices, atmospheres, songs, and other cultural flotsam that is by turns, funny, unsettling, and strangely affecting, but always mesmerizing."
Read more

"Fearless and weird...There is never enough story to know which end is up...It is all just odd and disjointed...The play tosses out interesting snippets of New York history like popcorn, but the story never develops beyond witnessing the madness of a man who dresses like a homeless King George, his nonsensical interaction with Rip Van Winkle, or his hiding from his wife...Without more backstory and some continuity, it’s going to take a lot more than pickles and beer to clear the haze."
Read more

"For your comfort as an audience member, you absolutely must not try to attempt to figure out just what exactly is going on. You won’t have any fun if you do...The soundtrack is hilariously eclectic and campy. All the while Knickerbocker is trying to make sense of it for us...After that, all Hell breaks loose...If you are looking for something really fun and are willing to just go along for a wacky ride. If you’re okay with an entertaining jumble, I recommend this enjoyable production."
Read more