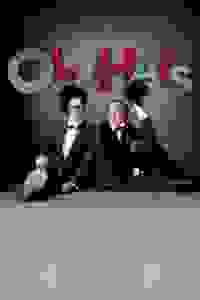 After an extended sold out run in 2013, Bill Irwin and David Shiner's award-winning, critically acclaimed production of 'Old Hats' returns to the Signature Theatre. This production reunites the clowns with original director Tina Landau and introduces their new songstress and comic foil Shaina Taub. Using music, technology and movement, Irwin and Shiner combine their inimitable magic and slapstick to create an unforgettable outing that's fun for the whole family.

See it if you want to laugh. You'll leave feeling better about the world. The men are masterful and Shaina Taub more than keeps up with up them!

Don't see it if you've forgotten how to laugh...although this show might remind you!

See it if you want a good night of laughter. Hilarious, old-timey show. Slapstick and silly.

Don't see it if You like deep jokes and a rich story. Know what you are getting into when you go see it.

See it if I think everyone would like this show! It is great for kids, parents, dates, intellectuals, music aficionados.

Don't see it if If you do not have a sense of humor!

See it if You enjoy the art of clowning, and want to see it done by masters.

Don't see it if You're really not interested in physical comedy.

See it if You like these actors and/or old fashioned clowns and vaudeville style entertainment.

Don't see it if You don't like old style vaudeville or clowns. I guess I don't. To me this was not compelling.

See it if You want to see two masters of their work live & in person. Funny, talented, laugh-out-loud skits.

Don't see it if You don't like slapstick comedy

Don't see it if you are a Luddite

"The boys are back in town, with a new accompanist who gives their mild shenanigans an unexpected edge...These skilled clowns know that chaos and comedy are cousins. A delightful and manic audience-participation sketch recreating the filming of a movie western lifts everyone’s spirits before it’s time to go home."
Read more

"'Old Hats' is itself a retread; a slightly different version played a sold-out run at the Signature in 2013. The sketches are mostly unchanged, except to the extent that they are automatically altered by the serendipity of audience participation, of which there’s a lot...Even when the material is unaltered it’s still welcome, putting the sweet-and-sour pairing of Irwin and Shiner to excellent use both separately and together."
Read more

"First, an admission: I hate clowns. But I'll happily make an exception for Bill Irwin and David Shiner, currently reprising their show 'Old Hats.' Even the routines you might have seen before — whether in their solo performances; their previous collaboration, Fool Moon; or this production, first seen in 2013 — are bursting with comic freshness and vitality, belying the fact that both men are in their sixties."
Read more

"Bill Irwin and David Shiner have been clowning around for so long, you’d think their shtick in 'Old Hats' would be more, well, old hat. But the rubber-limbed clowns (seriously, do they have any joints at all?) are as irresistible as ever."
Read more

"Most of the routines will be familiar to those who have seen earlier iterations the show, whose highlights are some audience-participation shenanigans and the big fine, in which several folks are put into the service of filming a silent Western. The only thing assured is the sound of laughter."
Read more

"Clowning may be 'old hat' for Irwin and Shiner — two masters of physical comedy — but they're pros at dusting off their old tricks and making them shine like new...Even if sight gags and magic acts leave you cold, you can't help but join the celebration of this onstage camaraderie that cheers the theatrical traditions this duo is silently keeping alive."
Read more

"Directed by Tina Landau, the return engagement of Irwin and Shiner's 2013 Signature hit, 'Old Hats,' is a fascinating display of an art form that retains its newness in the hands of masters who mix classic bits with modern wordless observations...Family friendly entertainment is rarely this hip...Singer/songwriter Shaina Taub and her band entertain between routines, showcasing flippantly fun lyrics and melodies that she sings with dark cheeriness."
Read more

"There's something illuminating and inspiring about witnessing a master decades into his career ply his craft as though he were fresh on the boards. And when it's good, it doesn't matter if it's familiar. So even though Irwin, Shiner, and Landau were just here three years ago, when 'Old Hats' made its New York premiere in the same theater, there's a good reason for this revival: They've improved both it and themselves."
Read more