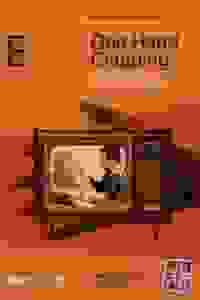 He leads a humdrum life in a northern town in England, but Howard has a talent: a photographic memory which he uses to win a TV quiz show.

Adapted from Anthony Burgess's 1961 novel, this is the darkly comic story of Howard and Janet Shirley, whose boring lives are turned around when he wins a game show. With his winnings, he and Janet travel the world, seeing everything they can. But upon their return, a disillusioned Howard makes a sinister proposition to Janet. Presented by 59E59 as part of their "Brits Off-Broadway" Festival.

Don't see it if You want something upbeat.

"If its darkly comic story doesn’t seem especially insightful today, it’s because so many others have mined the same territory in the past 54 years...It’s amusing, though at this point not blazingly original...'One Hand Clapping' is more history lesson than revelation."
Read more

"While 'One Hand Clapping' has moments of total absurdity, the characters are relatable and wholly interesting. The cast does a great portrayal of the story's humor, drama and action...You will deeply consider this show's characters, laugh a little, raise your brow and gasp. 'One Hand Clapping' is an unforgettable theatrical experience."
Read more

"'One Hand Clapping' is a throughly enjoyable night of theatre...It's a show for fans of 50s game show nostalgia, dark comedy, and general anglophiles alike, and is not to be missed as a part of the always unbeatable Brits Off-Broadway festival."
Read more

"More than half of the play is narrated, keeping it from building much dramatic momentum. There are far too many lengthy pauses between scenes, creating a choppy rhythm. And the climax, which involves life-or-death matters, is insufficiently dramatic...A not entirely successful adaptation, the worst thing you can say about 'One Hand Clapping' is that it might stir up some interest in Burgess."
Read more

"A well-crafted staging that may leave audiences with unanswered questions about the central couple...The performances by the trio are uniformly strong and engaging...Although I didn’t fully click with the story, it’s a thought provoking play by one of the twentieth century’s most trenchant commentators, one whose catalog has been somewhat overlooked in recent decades, and is therefore worth renewed interest."
Read more

"'One Hand Clapping' is not meant to be taken literally. Its tone is sardonic, its characters and situations exaggerated. Dialogue is pointed, aimed at the educational system, our consumerist society, and the dumbing down of humanity, especially by television...The play has little venom but lots of laughs. Nothing wrong with that."
Read more

"Fatalism, consumerism and a heady love triangle lead to a deliciously wicked conclusion in director Lucia Cox’s adaptation of 'One Hand Clapping'...a historically astute production of a tale that is still relevant; universal themes of passion, egoism, entitlement and celebrity make 'One Hand Clapping' accessible across generations, though perspectives will no doubt differ wildly."
Read more

"With slow, episodic pacing and action regularly punctuated, the play is clearly very beholden to its source material...Only in fully embracing the unique opportunities theater provides does this play move beyond its source material and into a powerful work of art...A chilling and accessible take on the novel, intimate and well-performed, and still as relevant today."
Read more