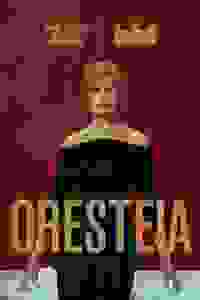 Lia Williams ('The Crown,' 'His Dark Materials') returns to the role for which she was nominated for an Olivier Award for Best Actress, Klytemnestra, in this new, contemporary version of the epic revenge tragedy. Plays in repertory with 'Hamlet.'

Aeschylus’ final play explores the sins of a family over several decades and explores whether justice can ever really be done.

This is the North American premiere for Icke's reimagined Olivier-winning 'Oresteia' that premiered at the Almeida Theatre in London. By putting 'Oresteia' in rep with 'Hamlet,' it allows audiences to see the connections in the classic plays written over 2,000 years apart.

See it if you've never seen the Orestia before, want a modern stage & approach to Greek tragedy, riveted by great acting and staging,

Don't see it if don't like long performances, don't understand why certain characters are circling stage throughout, expect a richer "Eumenidies" part

See it if Fresh look at a classic keeps you interested in watching the show.

Don't see it if It's long nearly 4 hours with intermission.

See it if Made me really appreciate my family; acting is brilliant & story is never boring; quickest 3 1/2 hours I've ever sat through; mesmerizing

Don't see it if You do not like harrowing Greek tragedies. This one rendered me speechless.

See it if A masterful production of this Greek tragedy comes alive for the New York community. 4 hours went by quickly. Bravo to the entire cast.

Don't see it if If you prefer a musical then skip this one.

See it if Greek tragedy of sacrifice, revenge, and war on one mother, father, and son. Intense exploration of what's Justice from society and the perp

See it if you enjoy sophisticated, fresh spins on Greek tragedies that tap into timeless themes with relevancy and poignancy; love great performances.

Don't see it if a four-hour Greek tragedy, modernized and reimagined, with several “pauses” and minimal staging/costuming, is tedious; you prefer musicals. Read more

See it if You enjoy reimagined classics. You like spectacle and violence.

"Robert Icke’s fraught and gripping 'Oresteia,' an emotionally harrowing retelling of Aeschylus’ trilogy at the Park Avenue Armory, doesn’t get bogged down in such background details of ancient mythology."
Read more

"If anyone came to the show hoping to learn about ancient Greece, they surely left unsatisfied. At the same time, the reimagining is too generic to have much to say about our current moment. The only politics I thought about were the politics of a British director changing gods to God and presenting it as a human universal."
Read more

"While people worship at any number of altars, they remain prey to the same dark impulses, for power, for dominance, for vengeance, for blood. This may be seen as either a source of grim solace—thus was it ever. Or merely sorrow—thus will it ever be."
Read more

"I believe Icke is engaged in an honest struggle with theatrical heritage but as a director, his method is to throw everything against the wall—deconstructed text, overwhelming design, metatheatrical devices—to see what sticks. There’s a synthetic impersonality to the whole affair."
Read more

" 'Oresteia' has stripped out most of the references to the gods and their fickle ways. ... Most of the thematic strands that Icke added into this production are so underexplored that they end up muddying the play and undercutting its power and any catharsis."
Read more

"It's a satisfying cap to a remarkably intelligent new take on the 'Oresteia,' one that will have audiences marveling afresh at the social, political, and historical insights that Aeschylus still has to impart to a new generation."
Read more

It has been a very, very long time -- perhaps never -- since I have seen a production so intimately acquainted with the terrors of the earth as Robert Icke's Oresteia. When first announced, the pairing of Hamlet and Oresteia for Park Avenue Armory's summer season seemed oddly arbitrary. But Icke, who directed both and adapted Aeschylus' text, manages in each case to merge classic tragedy with contemporary political reality to shattering effects. Theatre doesn't come more monumental, or more savage, than this.
Read more

"Director-adapter Icke has done what it’s highly likely many Greek playwrights did during the fifth-century BCE: create their own versions of popular myths for plays long lost and forgotten."
Read more