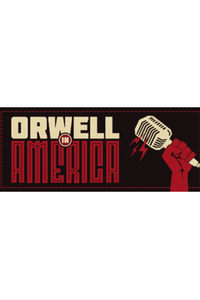 In this alternate history play set right after World War II, the author of 'Animal Farm' is chaperoned during an American book tour by a fetching young woman who must dissuade him from telling Americans why he is a proud socialist. 'Orwell in America' makes its New York premiere starring Jamie Horton (former leading actor of the Tony Award-winning Denver Center Theater Company) in the title role.

See it if you want to see great acting by Jamie Horton; you are interested in politics then and now; you don't mind George Orwell remaining a mystery.

Don't see it if wordy plays centering on the politics of Animal Farm are not interesting to you; you want to see a well edited story with the fat cut out.

See it if you enjoy plays involving one-on-one dialogue and not much else. Explores the developing relationship between Orwell and his publicist.

Don't see it if Plays with little "action" bore you. You are totally disinterested in Orwell's philosophy or personality. You prefer musicals.

"The script of 'Orwell in America' has several shortcomings, all of them excusable once its lead actor, Jamie Horton, starts to speak. As the title character, Mr. Horton delivers perhaps the finest performance I’ve seen Off Broadway this year, and greatly raises the worth of this moderately interesting play...Joe Sutton’s script is light on drama, outside of moments manufactured to spark tension...Still, Mr. Horton is dynamic...While there’s scant spectacle, Mr. Horton remains transfixing."
Read more

"Sutton has created a keen imagining of what might have occurred if Orwell had actually visited the United States on a book tour...The actors portray their roles with a passion that brings their characters to full life. Jamie Horton is excellent as George Orwell. You may believe you are in the company of the renowned writer who is tenacious, yet subtly charming...See 'Orwell in America' now while it is on the New York City stage. This theatrical jewel entertains and captivates its audience."
Read more

"It's fascinating that 'Orwell in America' aims to get at the truth of its title character through an entirely fictional set of incidents...Most the time 'Orwell in America' is a sympathetic portrait of a fierce, fearless thinker caught in the political crosscurrents of his time...Sutton makes real drama out this imaginary episode that accurately evokes the conflicts that roiled Orwell's life in its final chapter. And in Horton, he has an actor magnificently equipped to bring Orwell to life. "
Read more

"That Jamie Horton is an American actor employing an authentic sounding clipped British accent further substantiates his superb performance as the title role in the very enjoyable biographical fantasia…Ms. de Waal offers a lovely characterization conveying attractiveness and intelligence. De Waal and Horton have great chemistry together which is an integral part of the production’s success…Director Peter Hackett’s work with the actors achieves the desired sensitivity and passion."
Read more

"Sutton’s writing as well as Horton’s portrayal certainly bring to life a vivid character...Soundbites of audience members' questions during Blair's talk become slightly off-putting because of the technical capacity of the space. However, it is apparent how they push the story forward. The actors command the stage with captivating grace, especially Horton, who creates a spot-on, complex George Orwell who is no longer merely a name on a dust jacket, but a multidimensional human."
Read more

"Jamie Horton gives a delightful, virtuosic performance, engaging us with his humor and wit, while touching us with his neediness...Deftly directed by Peter Hackett, 'Orwell in America' is more than a fascinating study of a leading literary figure. It’s also a touching romance (Orwell is in his late 40s, Carlotta is in her early 20s). Moreover, it’s about historical context...Thanks to playwright Sutton’s passion and Jamie Horton’s performance, Orwell certainly has left an impression on us."
Read more

"I suspect that even fans of Orwell and those who are particularly well informed about this period in history will find a new level of understanding about this era...Director Peter Hackett makes some wonderful choices, both in utilization of the stage space and in the way his actors express themselves through body language and physicality. A well-rounded production that oozes charm and celebrates humor, 'Orwell in America' is an absolute treat and not to be missed."
Read more

"'Orwell in America' though interesting and informative, is more 'scholarly' than it needs to be...Mr. Horton and Ms. De Wall do justice to Mr. Sutton’s script but there is not enough in that script to offer either actor opportunities to explore their characters with depth. Or perhaps director Peter Hackett has not explored the depths of the actors’ formidable crafts...There is not enough new material or remarkable conflicts to make the narrative move forward in a fresh way."
Read more

“The play is...superbly acted. Horton bears a distinct resemblance to Orwell, has a flawless British accent, and brings intelligence, charm, and complete honesty to every line. De Waal, who brings Rachel Evan Wood to mind, matches him line for line with nuanced readings, squeezing the subtle truth out of every utterance...It makes for an engrossing experience of which it can be said that, if all plays were equal, some, like this one (despite its flaws), would be more equal than others.”
Read more

"What Horton does exceedingly well is build a portrait of Orwell as a rigid man and thinker minus the gift of personal appeal needed to win people over to his ideas...Much praise is due his stage partner de Waal. She turns in a very impressive performance as Carlotta...Director Hackett manages the scenic flow tidily and keeps the focus where it should be at all times...At awards time attention should be paid to this major acting accomplishment by Horton."
Read more

"It’s neither necessary to know Orwell’s history nor to have read 'Animal Farm' in order to enjoy the play. In fact, this is probably the best, most comprehensible retelling of the latter you’re likely to hear...Jamie Horton is marvelous...Jeanna de Waal offers just the right balance of historically subjugated Vassar smarts, ambition, femininity, and youth...Director Peter Hackett gives us two such distinctly different characters we can almost see class, geography and history."
Read more

"A fascinating exercise and a wonderful show...Jamie Horton brings a cantankerous, funny and stubborn Orwell to life...What makes this show wonderful is the dynamic between the much older George Orwell and the much younger and beautiful Carlotta. It is in this personal dynamic that Ms. de Waal and Mr. Horton make the characters sing. Their banter is heartfelt and their growing friendship blooms organically...The show never feels forced or leaden. I loved it."
Read more

"Award-winning playwright Joe Sutton not only captures the man of ideas but also places them in a setting where they, and he, are accessible even to those who know nothing at all of Orwell...They explore his work, socialism, the Spanish Civil War, Britain’s class system, and sexual politics – which I know sounds about as exciting as listening to a chess match on the radio, but Sutton and Horton have managed to make these discussions that we might have in our daily lives."
Read more

"It’s such a clear-cut premise it’s surprising that the play doesn’t have more intellectual and dramatic clarity...Jamie Horton is believable, at times touching and at other times monotonous...We do not, however, arrive at the sense of having in some important ways come to know the man or the author, or come to feel we’ve met him...Who, then, really, was George Orwell? You don’t find out in this play but you do learn something about his views...There are better ways."
Read more

"Gratefully, I did leave this show feeling I had spent an evening in the presence of Orwell...Jamie Horton as Orwell makes his remarkable New York City debut as a mature actor here...The play itself is a rather slight dramatic vehicle designed to bring Orwell to us, tracing a fictionalized relationship between him and a young female publicist...We don’t learn much more about Orwell’s life than is commonly known...De Waal does a wonderful job with the fairly thin material comprising her role."
Read more

"Orwell is played by Jamie Horton in a note-perfect portrayal...Orwell was indeed brilliant, and throughout the play we’re given a window into the history of his long and storied relationship with the written word...While all this might be interesting for this English major, the problem here is that it’s not much of a play...Director Peter Hackett does what he can to dramatize these lectures, but at the end of the day the majority of the piece is restricted to situations of one man talking."
Read more

View in admin
I
Lou Harry

"George Orwell—as portrayed here by Jamie Horton—is a fascinating figure...But Joe Sutton’s play isn’t a one-man show. His Orwell is on a book tour shepherded by a young publicist and the device feels, well, like a device. But some clunkiness is worth it when the central character is this interesting."
Read more

"Director Peter Hackett brings off this complicated but always engaging man with subtlety and charm...Jamie Horton is magnificent in the role. Orwell’s discomfort, loneliness, humor and passion are all developed before us in language that is very much the author’s. It is lively as well as precise...The moves from deep despair to subtle wit and humor are accomplished easily both in gestures by Horton and the words of the playwright."
Read more

"A riveting production of this intimate play with infinite scope, that is quite entertaining as well as potent…A fascinating portrait of a great but flawed man, revealing a deep personal drama. Sutton has crafted a taut script that gives insight into Orwell without ever becoming pedantic…Horton, despite occasionally overdramatizing, felt totally authentic as this frustrated upper-crust Englishman playing the populist…Sutton’s 'Orwell' is compelling history — and compelling entertainment."
Read more

"Sutton's thorough research and masterful dialogue illuminate his work's relevance to contemporary politics…The ensemble work of Horton and White in the lead roles is riveting…When Horton steps on stage, he inhabits the role of the Eton-educated Orwell, putting the audience solidly in his corner…Hackett has worked with Sutton on several previous productions…With ‘Orwell in America,’ the collaboration of these longtime colleagues gives rise to a polished, intelligent production."
Read more