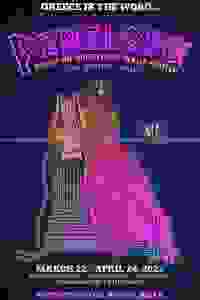 View in admin
Penelope, or How the Odyssey Was Really Written
NYC: Midtown E
82
Score it Scored!

Penelope, or How the Odyssey Was Really Written NYC Reviews and Tickets

A new musical comedy about the creation of one of the world's greatest literary epics.

The York Theatre Company, dedicated to the development of new musicals and rediscovery of musical gems from the past, presents the world premiere of Penelope, or How the Odyssey Was Really Written. As Penelope waits for her husband, who happens to be the King of Ithaca, to return from the Trojan war, she's faced with a bevy of suitors wanting to marry her and take over the kingdom. To stall them, Penelope writes letters to herself and pretends they’re from Odysseus saying he’s on his way. Little does she know that her letters will live on under the title, The Odyssey.

See it if Very funny with talented cast. Some may find too old fashioned. It's lite and easy.

Don't see it if Of you don't like spoofs.

Don't see it if Pleasantly entertaining, but not super engaging. The story hangs by a thread and lingers.

See it if You love adorable, hammy musical comedies that are spoofs on classics (eg, Desperate Measures, Boys From Syracuse) & have great scores.

Don't see it if You dislike rinky-dink off-Broadway shows that seem to have budgets a step above community theatre. (That being said, the cast is great!)

See it if Funny different take of telling the story of Odyssey.

Don't see it if You want a serious story and big flash stage.

See it if you like a very amusing and clever version of Penelope and the Odyssey. Talented cast and good script. The suitors are hilarious.

Don't see it if you like your myths to be taken seriously or you don't like barbershop quartets. Read more

See it if You want a mindless silly musical play.

Don't see it if You want a good musical play.

See it if like to see classics transformed not out of agitation but of love for the material & your fellow man. A romance for the modern humanist.

See it if You want to see what an off-B'way musical looked like in the 50's &60's . It even has a barber shop quartet like The Music Man,

Don't see it if You want a sophisticated spoof of Greek mythology, this is not for you.

"If you are looking for a vividly written Penelope, you would do better with Madeline Miller’s 2018 novel “Circe,” in which Penelope is indelible, and surprising, in a small supporting role. Here, though, the story that Kellogg (book and lyrics) and Weiner (music) tell suffers from a failure of imagination, as if making her a weaver of tales rather than of cloth gives her definition enough."
Read more

"Penelope frequently gets caught in this space between silly spoof and meaningful satire, unsure of whether it wants to be pure diversion or a messenger of enlightenment for its audiences. The result is often a diluted version of both, stuck in a no-man's land of unoriginal comedy and toothless moralizing."
Read more

"Weiner's music, a melding of showtune, soft rock, and a cappella, is pleasantly unremarkable, while David Hancock Turner's five-piece ensemble sometimes overpowers the vocals. Too bad, when many of Kellogg's lyrics are very worth hearing. Penelope, or How the Odyssey Was Really Written is a less finished work than Desperate Measures, and Kellogg's insistence on capping all this literate, apolitical nonsense with a gender-woke detour is annoying. But these are dire days, and some of us need musical comedy to help see us through them. We'll take what we can get."
Read more

Peter Kellogg’s latest musical-comedy adaptation, Penelope Or How the Odyssey Was Really Written, is a charming if lightweight comic version of Homer’s Greek epic The Odyssey told from the wife’s point of view. Kellogg, best known in New York for the award-winning Desperate Measure, a delightful country-western musical of Shakespeare’s Measure for Measure, worked with composer Steven Weiner this time around who has created a pleasant seemingly derivative score. As directed and choreographed by Emily Maltby for The York Theatre Company, the cast playing iconic characters from Greek mythology gives an excellent account of themselves in this crowd-pleasing new musical. Strangely enough, Penelope is surprisingly faithful to its source material while giving us both a humorous and feminist take on the material.
Read more

"With its origins in Greek epic poetry, the clever new musical Penelope: Or How the Odyssey Was Really Written, is using the advertising slogan: “Greece is the Word.” Funny, but there’s also truth in advertising in that statement. What book and lyric writer Peter Kellogg and composer Stephen Weiner have joyfully concocted is an anachronistic take on the fabled tale of Penelope and Odysseus, boasting a pastiche score that spans decades of popular music."
Read more

"In the absence of a humorous storyline, Kellogg has filled the musical with repetitive schtick. Telemachus, who is afraid of blood, falls in love with Daphne (Maria Wirries), a hog butcher, and faints when ribbons of blood emerge from a slaughtered animal (the pigs are the suitors in masks). Penelope’s would-be husbands are all ridiculously and inexplicably effeminate, especially the most aggressive, Antinous (Cooper Howell). And there are way too many winks and nods to the audience."
Read more