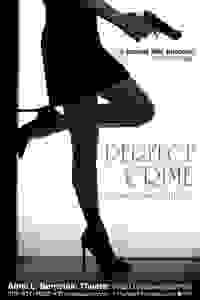 The longest running play in New York City history, “Perfect Crime” has run for over 12,000 performances. Notably, Catherine Russell has played the leading lady since its inception and has only missed four shows in the whole run. She holds the Guinness World Record for the most performances as a character in a play.

The murder mystery/thriller opens on the night a man is shot by a woman. The first detective on the scene assumes it must have been the wife. However, as the play continues to unfold, we are taken on a roller coaster ride of lies, deceptions, and false motives.

The play by Warren Manzi opened in 1987 at the Courtyard Playhouse in the West Village and has moved theaters nine times.

See it if You want to see a classic off Broadway show. It's been around forever.

Don't see it if You're looking for a great show. It's ok but far from great.

See it if you like a murder mystery type of show. Confusing at parts, slow at parts and awful at parts.

Don't see it if if you don't like slow, baseless shows that can put you to sleep at different times. I cannot figure how this show has lasted so long, was n

See it if complex "who done its" are your thing. In the tradition of mysteries, when a gun appears in the first act, it has to go off by the last.

Don't see it if you are easily frustrated by puzzle plays. The staff gives out a list of clues and connections to audience members as they leave the theater

See it if you've seen everything else in town. (Cheap tickets are usually easy to come by for this show.)

Don't see it if you expect some mystery from your mystery plays or thrills from your thrillers.

Don't see it if If you like a good ending to a mystery.

See it if It was ok, I found it hurt understand what was happening at times.

See it if You just want to check this one off the list. It is the longest running play in New York!

Don't see it if You think you're going to see an interesting thriller or murder mystery. Be warned, it's awful.

See it if you make a habit of flushing your money down the toilet.

Don't see it if you like good acting (the lead female has been in it for over 20 years and completely phones in her performance--just utterly bad).

"But if you stick with the story - and considering the turgid performances, that's asking a lot - it does make sense and even has a certain thematic elegance. As the illusions reveal themselves, a confusion and sense of terror slowly build. Or at least that's what should happen if the production wasn't so lethargic."
Read more

"In the face of awkward segues within the characters’ dialogue and the lack of chemistry, Perfect Crime is still an intriguing thriller full of unexpected twists and turns. It will leave you unsettled and questioning the motives of its characters like any suspenseful piece of work will do. And in my opinion, that is its strongest asset."
Read more