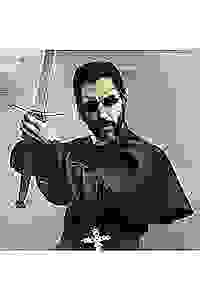 Police Cops: Badass Be Thy Name NYC Reviews and Tickets

Hot off the back of total sell-out runs at Edinburgh Fringe 2016, 2017, 2018 and Soho Theatre, London; multi award-winning company Police Cops bring you their latest comedy blockbuster: Badass Be Thy Name. Gritty northern town: 1999. A kitchen sink drama turns into a vampire-slaying horror epic. Complete with a 90s rave soundtrack, supercharged physical comedy and more vampires that you can shake a stake at.

See it if you like zaniness by three young guys who off non-stop action, costume changes, dancing and fast talking using props in a loose plot.

Don't see it if you are looking for a straight play or even a comedy - this is for a younger audience or those who relate to today's music and comedy.

See it if In the Club Hacienda, Satan must be taken down by a vampire slayer. "First rule of vampire slaying: Don't talk about Fight Club." Flubbery.

Don't see it if Thick Manchesterian accents come and go. No vampires! "I'm no babysitter,I was never here/I'm getting too old for this sheet" Cheeky Nudity. Read more